For the 25th anniversary of the 51-day showdown between Christian fundamentalists and federal government police in Waco, Texas, before it was known for a home makeover TV show couple, Paramount aired a six-part miniseries titled Waco.

Whether you know the story of the standoff, which was one of several high profile paramilitary sieges that came to define the Clinton administration and its trigger-happy attorney general, Janet Reno, and was preceded by a government siege against a family compound at Ruby Ridge in Idaho, Waco is thoroughly engrossing. The program, created by brothers John Erick Dowdle and Drew Dowdle (originally for the maligned Weinstein Company), is based upon two books on the showdown, A Place Called Waco by David Thibodeau and Leon Whiteson and Stalling for Time: My Life as an FBI Hostage Negotiator by Gary Noesner. I reviewed the series on AppleTV.

With sufficient pretext and a solid reconstruction based on certain facts about the events, Waco dramatizes the religious compound where David Koresh (Taylor Kitsch) congregated with his Branch Davidian followers, multiple wives and children while stockpiling weapons in anticipation of fulfilling a biblical prophecy in 1993.

The drama captures the layered nature of trying to find meaning in modern life. 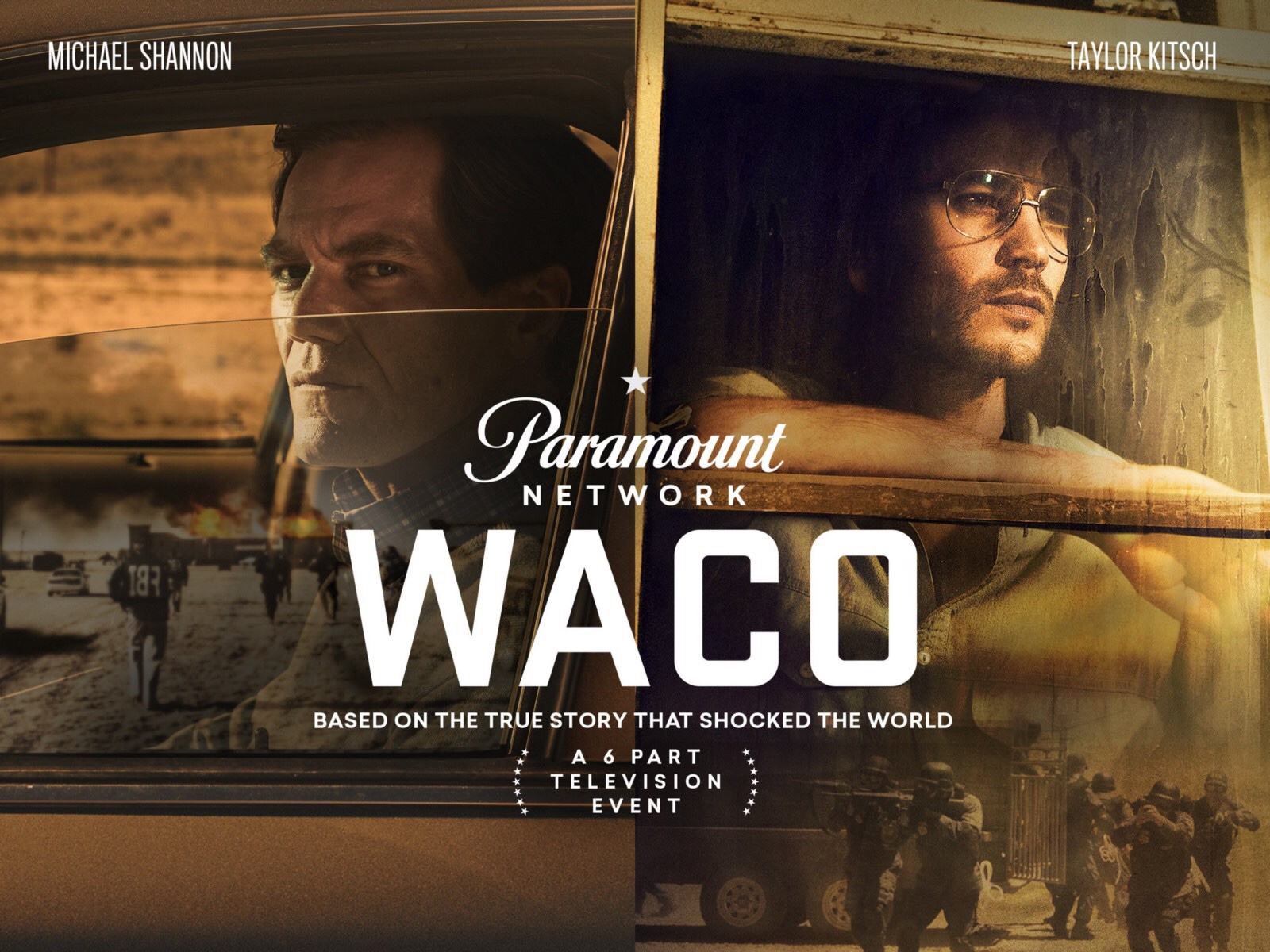 On the one hand, rock and roll musician David Thibodeau (Rory Culkin in a breakthrough role and performance) finds the peace and harmony his life’s been lacking when he accepts Koresh’s seemingly innocuous invitation to bunk at the compound for a few weeks. As with Charles Manson and his cult, the Rev. Jim Jones and his People’s Temple religion and other men of faith and their flocks, the superficial charm of the mystic is as undeniable as the promise of a simpler life. As with Manson and Jones, one sees the appeal of a believer supposedly offering sanctuary from the pressures and tension of modern problems.

On the other hand, Koresh sermonizes about a prophecy of an oncoming assault and makes it abundantly clear to all that he does not hold himself accountable to reality.

By the Nineties, America had gone from a burgeoning welfare state of post-Medicare 1969 and the doldrum days of 1978 to culturally depraved, politically correct days of Ninety-Three. This was when Americans evaded and ignored the clear implications of Islamic terrorist attacks and were prone to fall for Bill Clinton’s wrong and premature declaration that “the era of big government [was] over”. Indeed, as Waco demonstrates with good writing and strong performances, America’s emergent militarized authoritarianism was well under way.

Enter the author of Stalling for Time: My Life as an FBI Hostage Negotiator, the FBI’s special agent in charge of negotiations, Gary Noesner, played with perfection by Michael Shannon (Mud, Midnight Special, The Shape of Water). Shannon’s character represents the series’ only voice of reason, like the boy in Hans Christian Andersen’s The Emperor’s New Clothes, who dares to doubt, question and challenge the blank minds on both sides of the faith-based confrontation. This man, as depicted, is alone in going by facts and trusting his own judgment. As such, he is doomed to be reduced to the full impact of his complicity with the militarized state.

Drawing upon the Waco siege archives at Baylor University, which houses the topic’s largest collection, Waco, directed by John Erick Dowdle and Dennie Gordon, essentially shows adherents to these two faith-based notions — belief without evidence in militarism and belief without evidence in God and religion — as they meet, converge and become one, flaming mass death. Waco evokes Spahn Ranch and Jonestown but it engagingly captures the rise of Americans’ faith in the military state. Child refugee Elian Gonzalez would be seized at gunpoint within seven years and be forced to return to a slave state while bloodthirsty religionists for Islam schemed a diabolical plot to destroy our tallest towers and military defense center.

Waco shows why this became possible. With standout turns by John Leguizamo as one who warned, Camryn Mannheim as a mother and, especially, Paul Sparks as the man most emasculated by faith in Koresh and Branch Davidianism, the six-part series leads to its widely known outcome with taut precision. One may quibble with this scene or that, including the tendency to oversimplify life at a religious compound, especially its impact on children, which is all but ignored, really. And do not look for any serious philosophical examination of the rights of man, including the right to keep and bear arms, which is not, as Leonard Peikoff has observed, the same as having a right to stockpile rocket launchers and other military weapons.

But Waco shows what happened and why in scathing detail and, 25 years after it went up in flames, makes the viewer think, perhaps for the first time, about the whole horror scene as a mass congregation — and extermination — of Americans who insist on just following orders.