The West Wing debuted on NBC on September 22, 1999. The long-running drama, which aired until 2006, was developed after the success of 1995’s The American President, a good movie written by Aaron Sorkin (Steve Jobs, Molly’s Game) and directed by Rob Reiner (Stand By Me, Misery, The Bucket List, The Story of Us). Its writers and consultants included former Clinton White House press secretary Dee Dee Myers and former Carter White House press secretary Patrick Caddell. The show centered upon the daily work of the White House staff of a Democrat who had been elected president of the United States. Dramatically, The West Wing succeeds because it is purposeful, engaging and comes with a degree of authenticity. It helps that the show revolves around relevant, controversial issues and ideas. 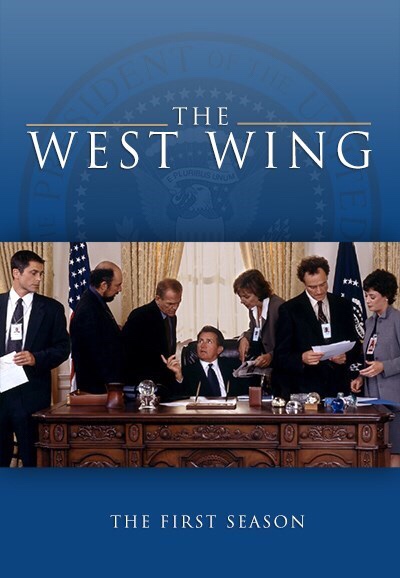 The West Wing never goes deep, despite its reputation, and I never watched a single, entire episode partly for this reason. What I’d sampled during its early to mid run struck me as sanctimonious, smug and superficial. I recall that I hated how the characters talked. I remember thinking that the dialogue, which is essentially the foundation of the program, was contrived. Every line, whether uttered by a bit player or a leading man, seemed overly designed to reach the plot’s outcome. These characters aren’t like real people, I thought at the time. They seemed more like puppets for certain political positions.

In light of today’s lousy political discourse, and knowing that a show can be better understood in time, I watched the first season on Apple TV (so without the original broadcast’s commercials). Though I confirmed some problems, the first season of The West Wing is entertaining.

On one hand, as a procedural about executive government, it’s not exhausting. This show is light, topical television programming. I don’t typically engage in what’s known as binge watching, nor do I think the best series are best seen in clusters of episodes. I think the best shows, like the best novels, require time to watch in intervals, as against watching in a steady stream, giving the viewer time to think about its themes. This is how I viewed The West Wing. One can watch and indulge in the character personality and plot conflicts, i.e., getting a bill through Congress, streamlining press communications, protecting the president’s daughter, without getting too steamed or invested in the show’s political philosophy. By the way, its political philosophy settles with age. At the end of the 20th century, Democrats sought to temper their welfare statism with realism. This makes watching The West Wing‘s first season an exercise partly in wide-eyed nostalgia.

On the other hand, the facts of reality and, in particular, America’s dreadful, dire political status quo (especially the current chief executive and his staff, Congress and last two American presidents), give one an appreciation for the show’s depiction of leaders and their staffers who take American politics and government seriously. Sorkin does not create safe spaces to hide, ignore or evade controversy. The West Wing is not all personality, all the time, with bitchy, gossipy ankle-biters constantly jockeying for status, position and power, which would be realistic, perhaps, but also boring and depressing. Besides, for tripe, smears and gossip all you have to do is read the New York Times or the Wall Street Journal or watch MSNBC or Fox News, which ape tawdry, tabloid press with names like BuzzFeed, Gawker and Breitbart. The West Wing in its first season touches on what’s become of politics and the press but its initial 22 episodes aired before 9/11, which I call Black Tuesday, and the wreckage that’s come in its wake. It’s impossible not to see a show about running the presidency without thinking about what’s become of the nation, the presidency and the press.

Indeed, the hard, bitter truth hangs over the first episode. In the series premiere, refugees from Communist Cuba are a plot point. But, here, contrary to what would happen in reality two months after the episode aired, the Democratic president’s White House chief of staff asserts that the moral position is to let the illegal immigrants, because they are fleeing from a totalitarian regime, come to America. In The West Wing, the refugees are a nameless, faceless collective — Democrats then and now only welcome immigrants in collectives — and the Democrats generally seek to admit them. Yet, within weeks of this first episode, the child refugee from Communism named Elian Gonzalez — the individual who floated alone after everyone else on his raft including his mother had drowned or been eaten by sharks — was on his way to being refused refuge in America by the entire United States government, and overwhelmingly opposed by the press and public, with the executive branch ordering the child removed at gunpoint, an action which made today’s anti-immigration purge possible.

The show’s first episode underscores this fact/fiction contrast, which is both a monstrous contradiction with America’s founding ideals and a historic plunge into darkness for the nation of the Enlightenment. It shows that Trump, as with ObamaCare’s worst tenets and other examples of anti-capitalism, merely finishes what Democrats started (and vice versa). The West Wing, in this sense, dramatizes what some viewers take as idealism (which I take instead as indicative of Sorkin’s and Clinton-era politics).

Other striking differences in the highly-rated show’s first season include depictions of Americans exercising their pre-surveillance state freedom to walk in front of White House, pagers (remember those?) and predominantly white male principals preaching and practicing against this or that government intervention for this or that group, cause or gain without premise-checking. One of the show’s most embarrassing plot points, which goes to one of its weakest links, is the hiring of a black man named Charlie (Dule Hill, soon to be on House of Cards and recently on USA’s Psych) by a condescending leading character named Josh Lyman (Bradley Whitford, recently in Get Out). Lyman shoehorns Charlie into a job as personal assistant to the President without so much as letting Charlie finish a sentence. Indeed, in the opening credits, Hill’s Charlie is the only character whose action sequence includes the appearance of another major character; as if Charlie exists in the White House only as an extension or appendage to Lyman’s paternalism, which is neither really dramatized on the show’s terms nor earned. It’s as if Charlie’s tethered in the opening credits to some sort of moral credit for Lyman, who, of course, has nothing to do with Charlie’s skills, merit and performance. Lyman simply hires Charlie for a job Charlie says he doesn’t want because he has the power to do so and thinks it’s good for Charlie. Both characters rarely interact after the hiring episode. When they do, it’s always pegged to Lyman hiring Charlie.

Whitford’s Lyman is the most problematic character, the one I found most annoying when I tried to watch The West Wing during its original run. Besides pushy, bigoted hiring practices, Josh Lyman makes anti-gay comments against a senator and is so greedy for power that he regards the shootdown of an American Air Force pilot as a political opportunity. Lyman does apologize for that last transgression to the White House chief of staff, who’s a veteran, but he is also the least introspective, least enjoyable character. Lyman’s constantly walking around the White House flailing his arms and flapping his lips often without advancing the plot. He only seems human when he’s trading barbs and conversing in the show’s rapid, rambling style with women, particularly his secretary, Donna (Janel Moloney), one of the drama’s two characters (both female) to raise objections to the smug men. The women characters, including a somewhat stereotypical deaf character played by Marlee Matlin, react to the men with arch, dry replies — men do the thinking — making them more like accessories.

Another irritating point is the use of the acronym POTUS, which became the Obama-genuflecting media’s go-to term of endearment for that disastrous American president, who spied on and persecuted journalists and whistleblowers alike. The widespread use by Washington types of this acronym proliferated in proportion to the decline of the West — like Pennsylvania Avenue barriers erected by President Bush after Black Tuesday, using the term POTUS is a way of detaching the office of the presidency from its accessibility and accountability to the people — and, unfortunately, I think it traces to this popular TV show.

Rob Lowe co-stars as Sam, who runs White House communications, representing Sorkin’s doubts about government intervention in people’s lives. Lowe does some of his best work in certain, if sporadic, scenes, though Sam doesn’t get nearly enough to do as Lyman dominates the show. Other characters include the dark, grumpy observant Jew and far leftist Toby (Richard Schiff), recovering alcoholic Leo (the late John Spencer, LA Law), and press secretary CJ (today’s heir to roles played by Eve Arden, Allison Janney, Path to Paradise, Mom, I, Tonya), who is the most fully developed character thanks to Janney’s superior skills. Martin Sheen (TV’s Sweet Hostage, The Subject Was Roses) plays the president as blustery, crisp and sugary, stern when necessary in making military decisions, with post-Grease Stockard Channing as his doctor wife and pre-Mad Men and Handmaid’s Tale Elisabeth Moss as his college student kid. Also, look for John Amos (Kunta Kinte in Roots), the Reverend Jesse Jackson and Tucker Carlson debating on CNN in the background and Karl Malden (On the Waterfront) as a priest opposing the death penalty.

Watch for the smart and often clever interplay, an asset which is commonly known, as it can be sharp, humorous and entertaining. Don’t expect each episode to make you think, though characters brush up against principled thoughts and actions, such as contemplating a stay on the death penalty and approving gays in the military, and kick back for an uncanny glimpse of those who think they’re decent men and women helping the president to shape policy, make laws and govern the country.

Most of all, relish the rapid rambling for the occasional breaks with specific emotional rewards, as when White House Chief of Staff Leo grants a pardon to a leaker over his past drug use, which enhance The West Wing. It’s hard not to care about characters in their most sincere and better moments, such as when the president stands by Sam after he meets a law school student who’s moonlighting as a prostitute to give her a graduation gift and a London tabloid photographer being paid $50k to get the picture drives off to violate their privacy.

Other plot points, such as the last episode’s cliffhanger involving an assassination attempt after subplots about the endangered (and now destroyed) Space Shuttle Columbia and the plight of an American Stealth fighter pilot in Iraq deepen the viewer’s appreciation for rotten policy, good government and decent political discourse and inadvertently take stock of how far and fast we’ve dipped into this steep decline.