Small theatrical productions in Los Angeles are one of my favorite artistic activities. Over the years, I’ve worked on, seen, covered, reviewed and supported many local stage adaptations, from Ayn Rand’s Anthem, Night of January 16th and Ideal to plays by Neil Simon, Agatha Christie and Edmond Rostand. So, when one of my Writing Boot Camp students — a season ticketholder at the Lincoln Stegman Theatre in the San Fernando Valley — invited me to a new production of The Rainmaker by N. Richard Nash, which I’ve seen produced on film but not on stage, I couldn’t resist. 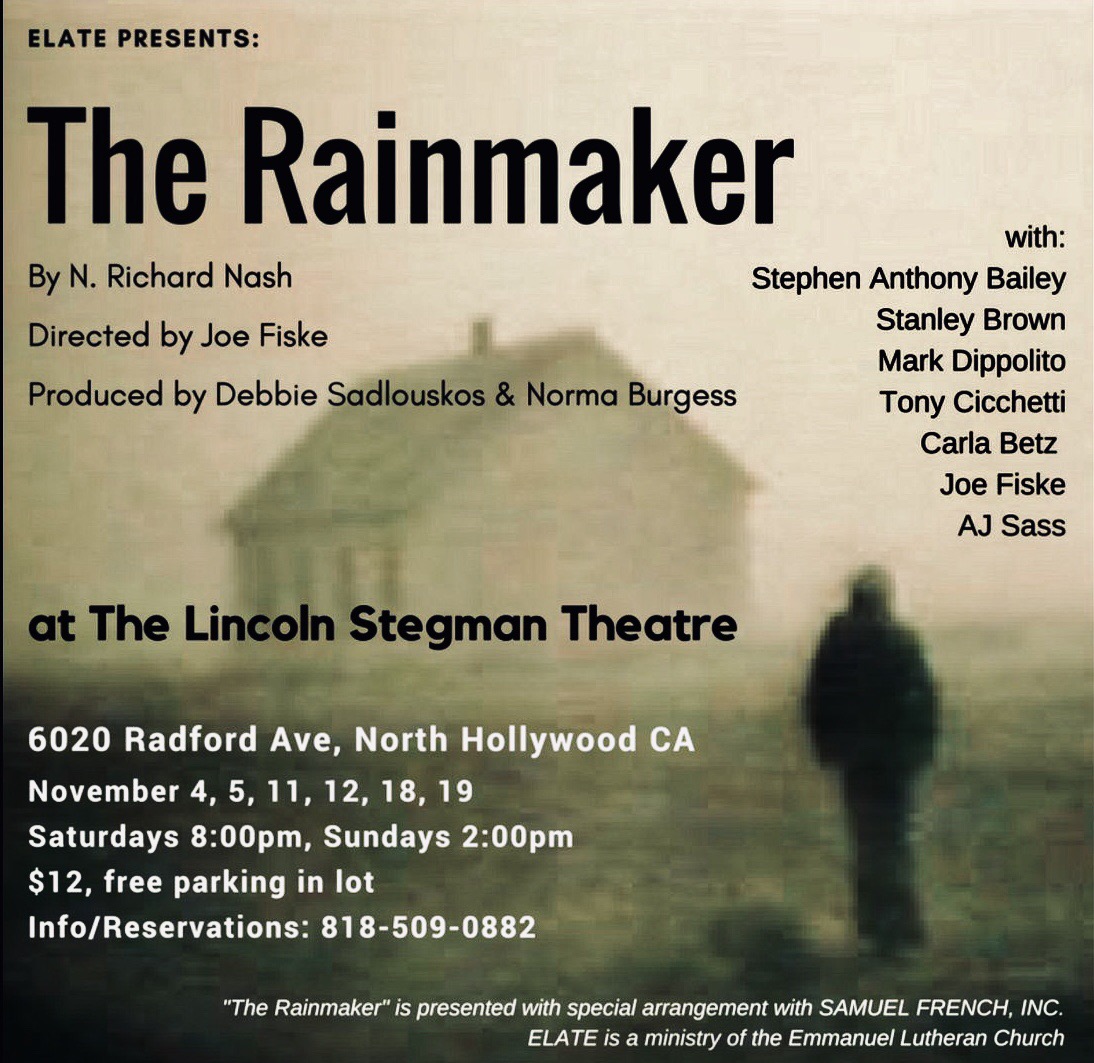 The play is the thing, as someone once said or wrote. This remarkable, simple and subtle story of human sexuality, unspooled in a barnyard one-night stand between a charismatic con man and a lonely, intellectual spinster, really holds up well. Set in Kansas in 1937 during the drought, The Rainmaker‘s about the Curry family’s encounter at their farm with a fast-talking stranger who takes a liking to the clan, especially their mentally challenged Jimmy, a character which in retrospect might’ve been considered autistic, and Lizzie, a plain woman in the motherless clan who dresses like a sack of potatoes. With a father who feeds her idealism if not realism, Lizzie’s all worked up with no place to channel her wants. If you’ve seen the somewhat stagey Fifties movie version — with Earl Holliman as Jimmy, Katharine Hepburn as Lizzie and Burt Lancaster in the title role — you know what happens.

On the Stegman’s confined stage, which continues for another week or so in North Hollywood through November 19, it’s as magical as it is on film. The Rainmaker is carefully structured as a drama. It is talky, as brother Noah comes closest to a villain trying to get everyone on the farm to level themselves with reality, and the show suffers in stretches from the slow, claustrophobic staging. But, fundamentally, The Rainmaker dramatizes the prospect of man-woman sex through its contrast between two types of men for Lizzie’s asking: the introvert and the extrovert. I’ll let you guess who’s who in this tradeoff but the suspense lies in watching both men bring out the best, which is to say the whole man, in themselves.

So is the Stegman’s lighting, set and production design, mostly by director Joe Fiske in cooperation with lighting designer Jamie Hitchcock, Stanley Brown, who capably plays Lizzie’s father, and Mark Stegman. The whole cast and crew are generally fine, though director Fiske, who plays the sexually voracious con man, errs in casting and directing himself as a more restrained or New Age rainmaker, lacking the magnetism to convince the audience that he’s got the appetite and character of a man who does what he does to and for repressed Lizzie (Carla Betz).

The Rainmaker, with its drumbeat theme that being greedy for living in (not to be confused with for) the moment is perfectly human, still makes an impact. “Stop wondering if you’re good enough,” a wise man instructs a spirited if wounded soul halfway through the plain, prairie tale. “Know that you are and start acting like it.” One hears a lot these days about what everyone says, does and knows in Tinseltown. It typically comes from those who’ve already made it in Hollywood, often for the worst reasons, or from those who’ve got an axe to grind, often for the best reasons. But people like Joe Fiske and this small, hardworking cast and crew put on thoughtful shows every day here in La La Land without much notice. They do it honestly and diligently and they barely get the recognition they deserve.

See The Rainmaker (produced by two women, for those keeping score, Norma Burgess and Debbie Sadlouskas) for $12 a ticket at the Lincoln Stegman Theatre (which ran Night of January 16th earlier this year) at 6020 Radford Avenue in North Hollywood, California 91606. Call for information and tickets at (818) 509-0882.