The performance-driven Driving Miss Daisy opened this weekend at Burbank, California’s Colony Theatre at Burbank Town Center. It’s been 30 years since playwright Alfred Uhry brought this quietly elegant and understated work to New York City and slightly less since this piece in his Atlanta trilogy won literature’s Pulitzer Prize. Like a play from another racially-themed city trilogy, August Wilson’s Pittsburgh-based Fences, Driving Miss Daisy is a simply structured slice of life. So, don’t expect something other than a display of naturalism. 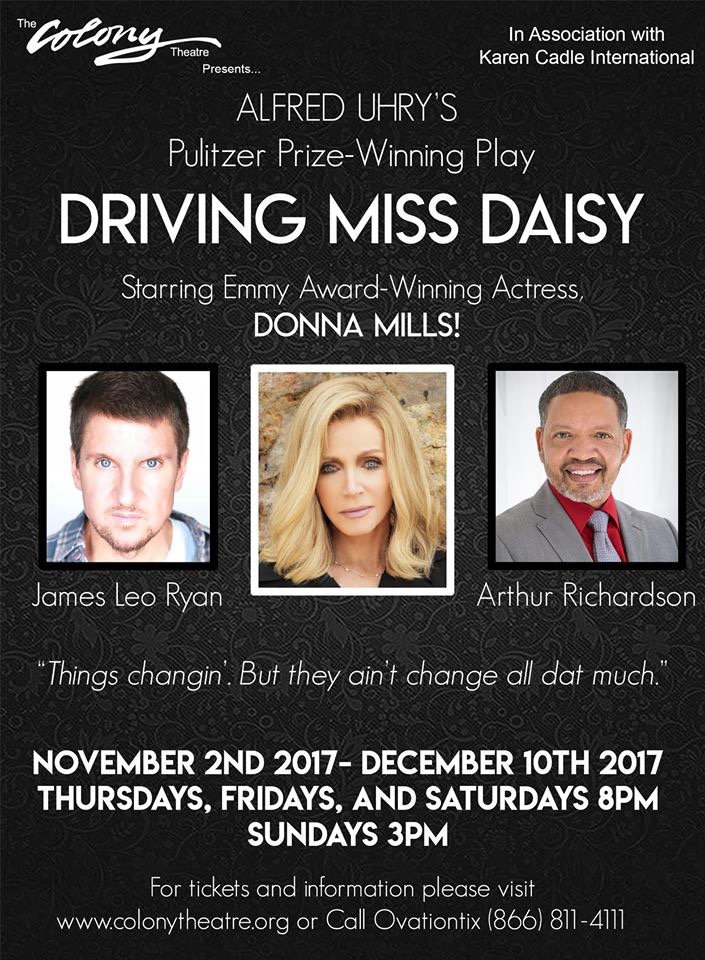 With infectiously transitional pop music such as songs performed by Doris Day and Burl Ives, and Genetra Tull’s finely detailed, creatively applied scenic design for a small stage, the setting for this story about a wealthy white woman in the South and her black driver begins neatly in the late Forties. These assets become liabilities as the sparse design barely changes — and the music’s occasionally too obscure or out of order — which fails to mark the passage of time. The sense of time passing is crucial to Driving Miss Daisy‘s success.

This is because the bond between Daisy (Donna Mills, Knots Landing) and chauffeur Hoke (Arthur Richardson) evolves organically. Daisy is a prickly old lady of 72 years old and, as a pre-civil rights era Southern Negro, Hoke is a second-class citizen. As in the outstanding and undeservedly maligned 1989 motion picture, which won Oscar’s Best Picture award, their bond builds at the patronage of her son and his employer, Boolie, played here with precision, subtlety and skill by James Leo Ryan.

Ms. Mills is an accomplished actress and her acting has never been better. Playing down her character’s fear and narrow-mindedness without diluting either, Mills modulates and intones just exactly to the right extent. She’s softer but no less guarded and difficult as the aging Jew in Georgia. Mills knows when to let a co-star take the lead in this uniquely drawn character arc. She delivers a biting look, she rubs her knees, she visits her late husband’s grave and, always, the veteran actress leaves room for the wider perspective.

Uhry’s hardy tale of three distinctive lives revolves around the tension, separatism and distance of mid-20th century undercurrents of race, sex, age, ethnicity and other factors. In this sense, Richardson’s Hoke, too, well played by the actor, thinks about his own wants and worth and rightly acts in his own interest. Hoke, who speaks of having wrestled hogs north of Macon, prejudges people, too, gently chastising his boss for choosing not to have kids and constantly referring to the family’s being Jewish. “You Jews,” the chauffeur declares, as the times, tales and subcultures both change and, in some ways, remain the same. But, Richardson, too, plays perfectly against his co-star, specifically Ms. Mills’ somewhat volatile Miss Daisy. His Hoke cautiously checks in the rear-view mirror, expresses an intention to work, admits to a deficiency and, watchfully, checks and indulges his pride as meticulously as he polishes the car.

Ryan’s performance as Boolie adds depth to both Hoke and Miss Daisy while offering a certain context on how the white, male, Jewish businessman advances progress through his own achievement. Indeed, Boolie’s business success underwrites what drives his mother, Miss Daisy, and his employee, Hoke, even as lynching, subservience and Martin Luther King put the strife and struggle for individual rights front and center. That I saw this play on the day a church was attacked almost 59 years to the date that a temple was bombed — an attack which serves as a plot point — underscores the play’s relevance. Driving Miss Daisy‘s contrast of harmony amid agony is at once truthful, thoughtful and reassuring.

This production, directed by Heather Provost and scheduled to run at the Colony Theatre through December 10, can build on this theme with greater period detail in music and staging, if not necessarily its three performances, which were, this opening weekend, extremely well done.