I hadn’t been to Dodger Stadium for years when I decided to watch a baseball game during daytime like I did when I was a kid.

Having childhood memories of watching men play ball from the bleachers at Wrigley Field and with my best friend at Comiskey Park in Chicago, I first came to the home of the legendary Los Angeles Dodgers with high expectations long ago with my friend Randy, who now runs a baseball academy.

I was not disappointed. The place, which opened for business on April 10, 1962, had become less than ideal, however, under previous ownership. Though I live and work close to Dodger Stadium (and I’ve covered sports, including baseball, for newspapers), I hadn’t attended a Dodger game since before I created this blog. 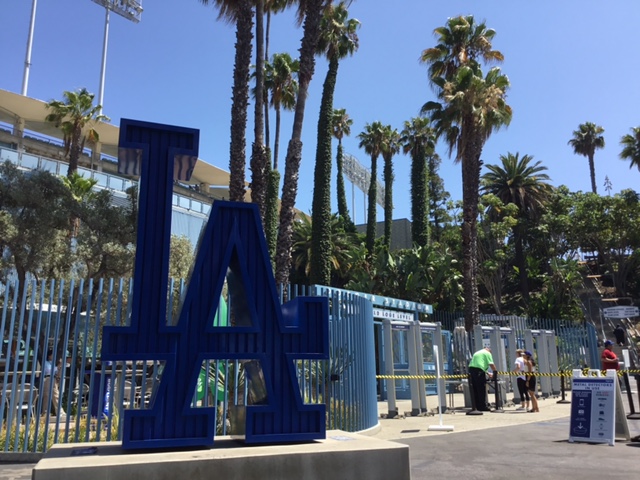 Seeing this summer’s games at Dodger Stadium brings back the joy of attending a baseball game. Los Angeles is the second largest city in America and LA’s Southern California ethos is distinctly American. But the challenge of modern living here is the same as anywhere in the deteriorating United States. Anything run by the government—hospitals, schools, roads—is a bureaucratic mess. This fact only makes a day at Dodger Stadium more of a marvel.

Designed, engineered and constructed with tiered levels and entrances and convenient parking for each area, it’s easily accessible, so I choose to drive, park and walk. It is better to arrive early for a chance to explore the clubs, bars, grills, shops, playgrounds and picture spots. Nestled in the hills of northeast LA, Dodger Stadium affords sweeping views. A seat in the upper reserve section puts the Hollywood sign in plain view. Sights of LA’s skyline, hillsides, suburbs, palm trees and surrounding mountain ranges are all included in the price of admission and the sight lines of the playing field are fine. There really isn’t a bad view of the field, though the creep of sponsor signage is obstructive, especially in right field.

Buying tickets online is relatively painless and the admission process is simple. After a security check, show your smart phone ticket and parking pass or print them and follow the signs to your seat. After a safety announcement, ceremonial balls, pitches and the national anthem, and broadcaster Vin Scully’s context-setting pre-game clip, the Dodgers and opponents take the field. Before the game’s over, whenever that happens, visitors are treated to songs (Rodgers’ & Hammerstein’s “Oh, What a Beautiful Morning” from Oklahoma!, “Take Me Out to the Ballgame”), short promotions, occasional gifts and gambling, cheers, replays on ballpark monitors everywhere and the seventh inning stretch. Alcohol is served for a limited time during the game. Concession prices are inflated, of course, though guests can bring regular sized bottled water, snacks and backpacks. Making a video of the game violates team rules and fans can visit Dodgers.com for details and information on tours, etc. If you don’t want to eat Dodger Dogs ($6), healthy food pretty much means eating a salad (they’re good). 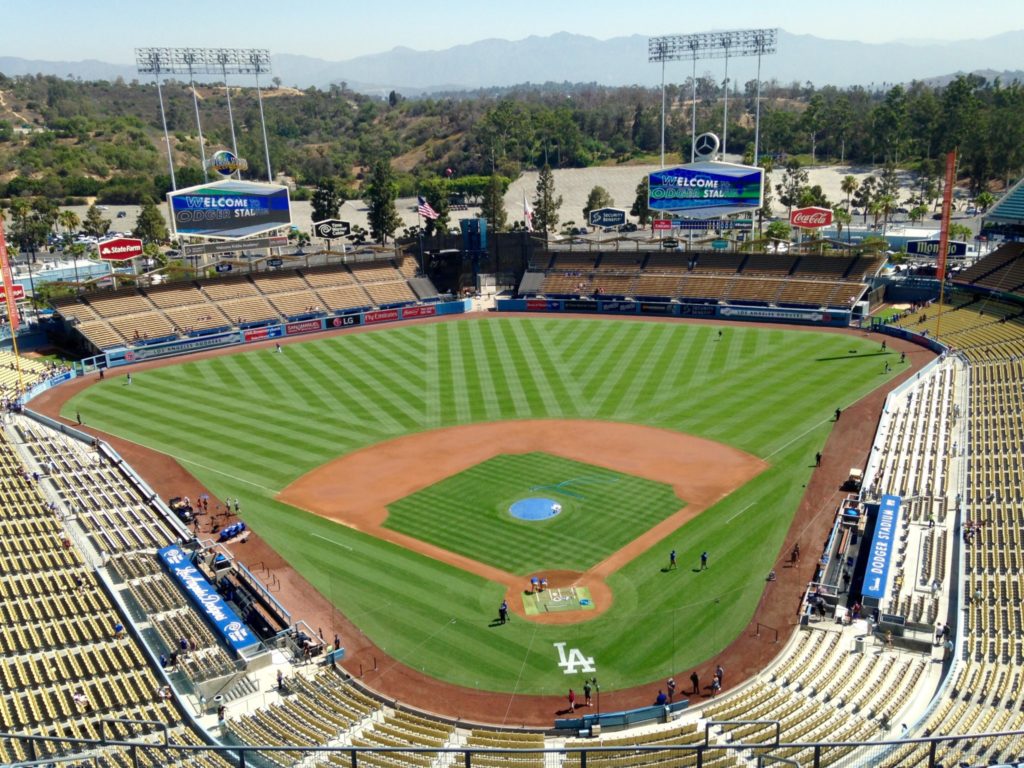 The Los Angeles Dodgers are rightly focused on athletic improvement (and taking care of Corey Seaver after he was beaned in the right wrist during yesterday’s game against the Phillies) but, judging by my recent game attendance, the stadium meets the ownership’s goal of restoring a safe, family-friendly spectator sports experience. From upper decks to club, premium and box seating, Dodger Stadium offers a terrific game day of baseball. With driving and exclusive Uber deal options, as well as shuttle bus and bicycling accommodations, transportation is relatively accessible. Seats are comfortable, restrooms are spotless, ushers are helpful and everyone is excited to be there.

The reason: to cheer for men of ability to play this wonderful sport with its sense of being suspended in time—and to watch LA’s Major League baseball team play to win. This season, the Dodgers have been in and out of first place and, from group gatherings of co-workers and families to school field trip students, celebrity guests and honored war veterans, the range of spectators primarily come for the grace, thrill and playfulness of the game.

As with any great American city’s baseball team, Dodger fans make attending baseball at the stadium a unique experience. My favorite part of seeing the Dodgers compete at Dodger Stadium, besides getting seriously if temporarily away from the egalitarian rot wasting the world, is being among decent, hardworking and happy Southern Californians who cheer for the Dodgers to win. Baseball is still the great American sport. LA’s renewed Dodger Stadium is once again one of the best places to watch men play ball.