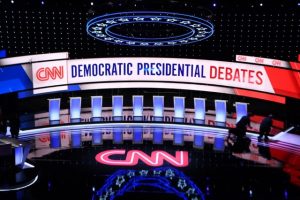 As has been true for years now, the Des Moines, Iowa event at Drake University was not a debate in any meaningful sense of the term. One of the CNN debate questioners displayed explicit sexism when she sided with a female New England senator who argued with a male New England senator (both of whom seek to abolish capitalism and enact total statism) when she declared to the female: “I want to give you the last word” after framing what the male said as false.

The male is Sen. Sanders. The dispute is over a trivial issue of one’s view of electability. Worse than whatever Sanders, a self-described socialist, had in mind when he spoke is what he has in mind for America’s defense and economics. Sanders came out against U.S. unilateral military action under any circumstances. Instead, he proposed to “bring the world together”, as he put it, resurrect the United Nations and seek pacifism. On domestic policy, Sanders seeks to “end all premiums [sic]” imposed under ObamaCare which is 10 years old. Sanders would replace ObamaCare with totalitarianism in health care; total government control he calls “Medicare for all”. When asked what he would say to those working in what remains of Iowa’s insurance industry, a cartel now controlled by the government, whose lives and careers will be annihilated, Sanders cavalierly dismissed them, muttering about re-education and subsidies for “up to five years”. This is an example of Democrats’ compassion, which is the contempt of a socialist for what glimmers of capitalism remain.

Vice-President Biden said that he would leave troops in the Mideast and aped competitor Sen. Warren, prefacing his plan with her repetitious phrase, “Here’s the deal…” and pledged to “limit what [drug companies] can charge [for drugs]”. For her part, Sen. Warren said she would “pull troops out” of the Mideast though she gives no indication that she grasps the concept of military defense. Domestically, Warren admitted that her plans for government controlled child care “has some people making a small payment” — and she hustled her proposed wealth tax — before plugging “trans women of color”, “black and brown women” “mommas and daddies” and, in a rare moment of honesty which she was quick to amend with her characteristic dishonesty, ‪“billions of dollars in taxes”.‬

Another Iowa frontrunner stuck in the pack, former Mayor Buttigieg, was asked about his mandatory government health care plan, which forces Americans into ObamaCare’s pseudo-insurance cartel. Buttigieg vowed that his administration will make “sure there’s no such thing as an uninsured person”, which sounds downright ominous, while “making sure there’s freedom of choice”.

His fellow Midwesterner, Sen. Klobuchar, was also contradictory. The Minnesota feminist made an issue about being a woman, invoking statistics about women in elective government while stressing competence and, then, promptly neglecting to remember the name of the female governor she singled out in her stats. On competence, though I did not keep tally, I think Klobuchar exceeded time in answering every question every time.

Activist Steyer looked like a bobbleheaded windup toy, smiling with a blank stare and bobbling his head while driving his arm and fist up and down in a robotic manner while prattling left-wing slogans. It was like watching one of Ira Levin’s Stepford Wives but the automaton was male.

This strikes me as a good end to this commentary on the Democrats’ pseudo-debate (read my roundup of Democrats’ discourse last fall here) because cruel, bureaucratic, total emotional detachment from destroying humanity with what Democrats mean by “diversity and inclusion”, conformity and exclusion, down to Biden’s facially alarming and amusing final remarks, is the 2020 Democrats’ emergent theme.