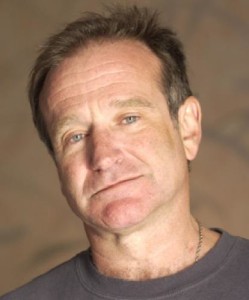 Sadness was unmistakable from the beginning of the remarkable career of Robin Williams, who died from an apparent suicide last night, according to police in the northern California county where he lived. Anyone who remembers his exciting breakthrough in ABC’s Happy Days spinoff, Mork & Mindy (1978), could see it in his eyes. It was in almost everything he did, from his performance as the title character in George Roy Hill’s adaptation of John Irving’s absurdist novel The World According to Garp (1982) to his work in recent years, including TV’s The Crazy Ones. His manic humor usually overshadowed his serious acting ability, on display in everything from Garp to Good Will Hunting (1997) and numerous dramatic roles.

The humor was at his best hilarious, from an appearance on Eight is Enough to his role in Moscow on the Hudson and in any of his TV, film and standup comic performances. He made me laugh out loud for the first time when his character Mork the alien dropped an egg in Mindy’s kitchen and said, “fly, be free!” There are moments of comic genius in nearly all of his work and it’s evident that everyone has a favorite scene or moment as shock and grief are shared throughout social media. Among my favorites are his restaurant interchanges in Chris Columbus’ Mrs. Doubtfire (1993), choreography display in Mike Nichols‘ The Birdcage (1996) and his guest spots on The Tonight Show with Johnny Carson. But his ability to capture a tragic sensibility came across in his most indelible roles, for which he ought to be fondly remembered, too: Hook (1991), Good Morning, Vietnam, (1987), Dead Poets Society (1989), Bicentennial Man (1999), August Rush (2007) and one of my favorite pictures about aligning the adult with the childlike, Jumanji (1995). I still think his performance as T.S. Garp, the bastard son of nurse Jenny Fields, is underrated.

As Garp, a quality that might be called his ill-fated, infinite sadness was well deployed and portrayed, with Robin Williams as constant caretaker of prostitutes, transvestites, students and a Puritanical feminist mother, stalked by mutes and the man-hating Pooh Percy and wry observer of strange, dark and confusing times. In his sleeveless, rainbow down jacket on Mork & Mindy, he made millions of Americans laugh at his intelligent, improvised ridicule of the ridiculous and he kept on for 35 years. He spoke openly about his personal struggles and, as he leaves a wife and children and admirers around the world, Robin Williams’ legacy could be that life, especially its good humor, is driven by that which ought to be taken seriously.