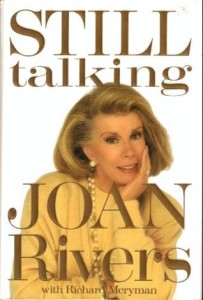 Joan Rivers, who died today at the age of 81, was more than a comedienne. She was also an intellectual. Her ability to think, the drive to think for herself, is crucial to grasping why she made millions laugh. She always started by making the audience think.

At her best, she was hilariously fresh, honest and funny. Watch her clips but let them play. She told stories, not just jokes. Though in her later years she could be crude and vulgar and I didn’t watch her cut-up routines, she was biting, incisive and brilliant. The neurotic Jew from Brooklyn was part of the act and in an age when people push everyone to fit in, conform and just follow, Joan Rivers basically said ‘up yours’ to conformity, political correctness and not making waves. She was an individualist, a true creator and a real, enterprising pioneer.

What waves she made. Named as the Tonight Show‘s first permanent guest host by Johnny Carson, at a time when hundreds of America’s top comedians were flagrantly pushing for the position, she filled in for the legendary host with impeccable skill. She wrote and directed a movie about a man who becomes pregnant, a character played by a then-unknown standup comic named Billy Crystal, whom she thought deserved to be a star. She portrayed a knife-wielding lesbian pining for a character played by Barbra Streisand on stage. She won an Emmy hosting a thoughtful daytime talk show, broke new ground by headlining a comedy show for a new television network called Fox and used her fashion experience (Rivers worked for Lord & Taylor and as a fashion coordinator) throughout her career, selling products on a shopping channel and hosting fashion shows.

Joan Rivers wrote books, including a breakthrough jokes book about a fictional tramp named Heidi Abromowitz, popularized the phrase “Can we talk?”, voiced the baby in Look Who’s Talking, made her movie debut opposite Burt Lancaster in The Swimmer and made a documentary. She worked with Mel Brooks and all the top comedians. She did it all without turning herself into a joke. Some may claim with credibility that that came later and I think to some extent it did – and for what it’s worth I think she made a mistake when she took the Fox job, angering Johnny Carson – but without question Joan Rivers was an original.

That she achieved exceptional success in several fields across multiple platforms – TV, cable TV, movies, theater, bestselling books, comedy – is more extraordinary because she was a woman, a fact she used though never while denigrating man. This alone is an accomplishment in an anti-male culture. Much will be said and written about Joan Rivers and some of the criticism will be true, though it should also be remembered that Ms. Rivers survived her husband’s suicide. Her legacy is the ability to make people laugh through an understanding of the world around them. Having lost Robin Williams, Americans are left with Billy Crystal as one of the last great comedians of the mind. Let it be remembered that his first big break, before Soap, before hosting the Oscars, before he looked mah-velous and rode horses with Jack Palance, came from a comedienne who was, at least to me when I met her, gracious, intelligent, magnanimous and hilarious all at once. As she wrote about the box office bomb Rabbit Test starring Billy Crystal in a book pictured here:

I believe that hell is not pain and fire, but boredom. I think you must take risks, must see how far you can push. If you really believe in something, you must try it, must do it. If you always take your shot, your life is going to be interesting. Failure is devastating, but here I am fifteen years later feeling that Rabbit Test was one of the most successful experiences I have ever had. It is part of my education, part of my consciousness…Hell, Rabbit Test may be on the shelf, but I can pull it out and know that I made it happen.”

I think this expression of failure and knowledge that her work is primarily the product of her mind and that she owned it – this commitment to the self-made – is what sets her apart. May Joan Rivers, who entered talking, left me laughing and is survived by her daughter, protege and professional partner, Melissa Rivers, and grandson Cooper, rest in peace.