The New Left-run Democratic Party staged an unsuccessful convention in my estimation, underscoring a contention that Democrats, if elected again to the presidency, may be less effective in persuading the public than you might think. With a politically correct culture and its byproduct, rampant self-suppression and self-censorship, polls may conceal or underestimate the number of Trump voters. I suspect that Trump, a buffoon who represents an American backlash against dominant ideas and intellectuals, has the edge in 2016’s presidential race.

This is partly thanks to Democrats, whose vacancy and empty value proposition is contained in their secondhand convention slogan: “Stronger Together”. 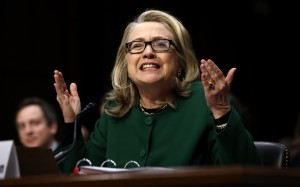 Hillary Clinton, the former Goldwater girl gone to college, may have intended to stress togetherness over strength but I think the convention theme is a part of her campaign’s problem. By emphasizing unity without providing a coherent cause around which to unite or evidence of unity—the nation, in fact, is divided—Democrats incurred the voter’s anger (Clinton admits that people are “furious” at the state of the union) and affirmed that the nation is more divided than before Obama was elected and re-elected. There is no togetherness in America. Given two terms of hope and change and constant conflict brought by Barack Obama, there is chronic domestic violence and foreign attack—often the blurring of both—amid daily strife, confusion and division.

Obama is why Donald Trump is the only apparent alternative.

Similarly, by emphasizing strength—”Stronger Together”—as the goal, Democrats all but cede Trump’s reason to exist in the race, daring the American voter to choose the strongman whose basic proposition is that he can fix what’s wrong with America, because he’s a more conniving crony than Mrs. Clinton, and that he can do it—somehow, never mind details. If togetherness is what voters seek, they were reminded this week during the Philadelphia propaganda that it is lacking in the U.S. If pure strength is what voters want, they were given a contrast between Trump, whose bluster is mistaken for strength, and Clinton, who obviously does not bring Americans “together” let alone make the incessantly attacked U.S. “stronger”. The evidence is everywhere in the news, social media and the streets. The U.S. is neither stronger nor together by the most elementary accounting of facts. Only entrenched New Left intellectuals and stakeholders really believe Democrats’ slogan if they do (and if they told the truth, they probably don’t). Leftists hurl invective at the Tea Party movement, Ted Cruz and Fox News and at anyone, even CNN and Starbucks, who questions the Obama administration or leftist dogma.

In other words, the Democratic National Convention’s “Stronger Together” is based on a fraud, a lie, a contradiction.

This suits President Barack Obama, a dishonest president who lapsed this week into his performance persona again, cadence and all, to deliver what most pundits deemed an optimistic speech on America. That Obama’s speech was not optimistic, unless by optimism one means confidence in a future nation divided by race, sex and every other factor beyond one’s immediate control, was lost on most pundits, who compared Obama to Ronald Reagan. Obama’s hip, rhythmic rant chided Trump’s narcissism while displaying Obama’s own, invoking himself over and over, from self-centered focus on a past speech to a veiled pitch for a book he wrote. No, Obama’s speech is not an example of optimism in America’s future. It is an example of gloating about America’s demise by his doing. Flag-waving displays of what’s been interpreted as patriotism were a hacking at Americanism—a kind of gravedancing before the casket’s been lowered. The Obama presidency stands for dismantling American law, rights and founding ideals. Obama and the Democrats seek an end to the United States for its moral basis: individual rights. The screaming, yelling, raging and sermonizing was not an expression of optimism, it was pure triumphalism for multiculturalism and feminism and their premise, egalitarianism, over individualism, thinly disguised as Philadelphia patriotism.

But Democrats’ celebration of victory over individualism is premature. America is not yet completely done as the nation based on individual rights. Not yet, not yet. Democrats laid out every old idea to dominate the world’s bloodiest century—altruism, collectivism, statism—with plans for total government control of the individual’s life in terms of faith and the use of force. A preacher sermonized the multicult while a general bellowed about a PC war. Mrs. Clinton would rehash her book about the U.S. as a village, a book in which she proposed prohibition of divorce for couples with children. Vice-presidential nominee Tim Kaine, a Virginian who expressed admiration for Harry Truman, the Democrat who brought peace in a world at war by dropping the atomic bomb twice, not just once, on the enemy, stood out for sounding reasonable. Bill Clinton was reduced to a prop to make his hard, embittered wife seem softer. Michelle Obama chastised and judged. Michael Bloomberg, who as mayor used demagoguery to ban drinks in New York City, denounced the danger of demagoguery. Socialist Bernie Sanders, who is not a Democrat, made an impact with his socialist uprising. Elizabeth Warren noticeably withheld a rant. Democrats succumbed to the New Left.

Then came Chelsea Clinton, the only child of multimillionaire influence peddlers Bill and Hillary Clinton. Ms. Clinton eerily emerged to mimic the Stepford-like appearance last week of her friend, Ivanka Trump. This familialism or familism—the alarming rise of a Blood Collective/Family as an American political power—began as modern-era mythology with the morally depraved Kennedys, continued with the terrible presidencies of the Bushes, echoed with repulsive objectification of wives, children and grandchildren with Gores, Palins and others and comes to a sickening, un-American climax with this parade of Trumps, Clintons and still more new breeds. Twins were a Democrat theme. America’s first pair of husband-wife presidential nominees is coupled with a nepotistic GOP nominee. If either major candidate wins, a tyranny of Family looms large over America.

Enter Hillary Clinton, an activist-Methodist from Park Ridge, Illinois, who in her less guarded moments is almost amicable compared to her vulgar, nationalist opponent. Yet the former first lady, senator and secretary of state resembles Meryl Streep’s matriarch ruler in The Giver, pointing, hugging and faking her way through this week’s propaganda show, complete with big screen breaking glass effects to evoke a female Big Brother in 1984. Whether that’s what persuades voters that she is less pathological than the deranged, dangerous Donald Trump remains to be seen. Hillary Clinton had an opportunity to show her composure and speak to Americans as a fractured but decent people, rising above the hatred and divisiveness of the Obama years, pledging to do what her gauzy graphics promise she’s equipped to do: listen to and contemplate Americans as individuals. Hillary Clinton, accepting her earliest New Left ideals, badgered by Sanders the socialist and tied to a track record of distorting the truth while peddling influence, did not rise to the occasion.