Taking a trip to Chicago in January is not the best idea for someone like me who loves living in southern California. 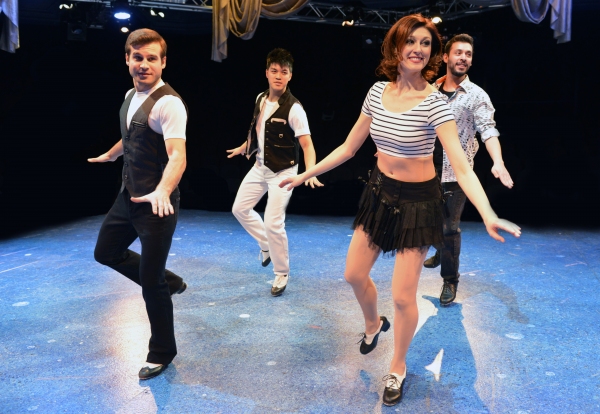 But after the death of my friend Kathy last month, I welcomed an opportunity to go back and visit my parents where I used to live on Chicagoland’s North Shore. The wind off Lake Michigan took temperatures way down and I was right back to the frigid feeling I had when I was walking to school bundled up with several layers of socks, boots and Baggies on my feet. Of course, experience and seat warmers help and we made sure we had a wonderful time, so we took in a show at Lincolnshire’s Marriott Theatre, a preview of an Andrew Lloyd Webber tribute in song and dance, “Now and Forever: The Music of Andrew Lloyd Webber“, featuring highlights from the composer’s Evita, CATS, Jesus Christ Superstar, Joseph and the Amazing Technicolor Dreamcoat, Sunset Boulevard, and the world’s most successful musical, Phantom of the Opera. The show exceeded expectations, and while my dad made a new friend who cherished the rendition of “Just One Look” from Sunset Boulevard, my mom and I enjoyed the incredible tap dancing routine. There’s melancholy in Lloyd Webber’s work, and in Tim Rice’s lyrics, and half the production features songs from his lesser known musicals, but there is an unmistakable optimism amid the bitterness, too. The performance – the show runs through March 24 – made me want to see more of his musicals.

Between editorial and story conferences about planned new writing projects and articles for North Shore Weekend, with Editor-in-Chief David Sweet, I met new and old friends, including at Westfield’s Old Orchard, near where I used to canvass for John Porter and take the bus and the Skokie Swift to a job where I also had my first meeting with a literary agent. I recently finished writing a profile of musician Scott Bennett, which is scheduled to appear in the February 8 edition of North Shore Weekend (more news to come on other stories for the new suburban Chicago publication).

A long-ago friend invited me to attend a concert by Scottish singer-songwriter Midge Ure (a recovering alcoholic who co-wrote “Do They Know It’s Christmas?” and formerly of New Wave band Ultravox), which was a treat for this fan, though his voice gave out after pouring his soul into every tune. While he didn’t perform “Reap the Wild Wind”, a favorite romantic anthem, he gave a rousing, defiant rendition of “One Small Day”: “My sentimental friends/your time will come again…One day, where every hour could be a joy to me/And live a life the way it’s meant to be.” The Ultravox lead singer (“Hymn,” “The Voice”, “Vienna”) played the 400-seat Mayne Stage in Rogers Park on Morse Avenue, just off the El stop there, and it’s an impressive venue with outstanding service, good food – a cut above bar fare – and a solid, acoustically excellent experience. The wind was whistling on the Saturday night I attended, but I watched the valet attendant hustle his way to the cars and get the job done after the packed house let out. The Mayne Stage, located in a dodgy piece of real estate near the Catholic Loyola University on Chicago’s north side, opened as Morse Theater in 1912, showcasing vaudeville and movies. After a meticulous restoration and renovation by owner Jennifer Pritzker, and superior management by my friend Joe Prino, who used to co-own Smart Bar and Cabaret Metro on Wrigleyville’s Clark Street with Joe Shanahan, Mayne Stage is perfect for intimate shows. Look for jazz, cabaret, rock, comedy and classical bookings at this friendly Chicago theater. I know I’ll be returning for future engagements.

I flew to Chicago’s O’Hare Airport on Virgin America, America’s newest major (and my favorite) airline, and I had a great trip. But I could have done without the cold weather.