With Blondie, David Bowie, the Pretenders, Pat Benatar, the Cars and various other American and British punk and New Wave recording artists, Tom Petty, who died last night in Santa Monica, revived rock and roll in the late 1970s with fresh, original and elementary songwriting and tunes. 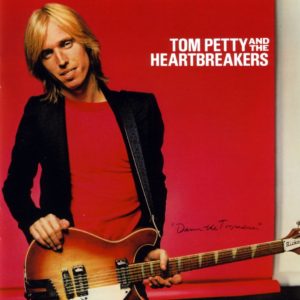 The 66-year-old Southern Californian, who was born and raised in Florida, dropped out of high school and met Elvis Presley on the Ocala, Florida, set of Follow That Dream, which inspired him to pursue a career in music. Petty, who’d been physically abused by his father, later said he’d decided to commit to becoming a rock and roll musician after watching the Beatles perform on live television. The early trajectory goes to why he’s being widely praised and mourned by music fans. I think part of what distinguishes Petty is that his songs and sensibility represent middle class American values. He brought both urgency and simplicity to rock’s essential roots. He did so with distinction.

I discovered Tom Petty & the Heartbreakers with his breakthrough, bestselling 1979 album Damn the Torpedoes (pictured) with its powerful songs bursting with sharp guitar riffs and biting, straightforward lyrics expressed in Petty’s bluesy, emphatic vocals in “Refugee,” “Don’t Do Me Like That,” “Here Comes My Girl,” and “Even the Losers”. As the years and decades passed, from his cool, distant “You Got Lucky” and “The Waiting” to “Free Fallin’” and the Dave Stewart-tinged “Don’t Come Around Here No More,” which Petty sings with the deep, slow and dead-on anger of someone who’s seeing things clearly for the first time, arcing up at the end for a fine, guitar-raging finish, and the simple yet insightful song he wrote with Electric Light Orchestra’s Jeff Lynne, “Learning to Fly”, a Tom Petty single always expressed a mood, sense or thought with melody, structure and clarity. Even his duet with Fleetwood Mac’s Stevie Nicks for her bestselling solo album Bella Donna, “Stop Draggin’ My Heart Around,” is distinctive in its first few notes. Whether on his own solo album, Wildflowers, or in his brief collaboration with Bob Dylan, George Harrison, Roy Orbison and Jeff Lynne in their band the Traveling Wilburys, Tom Petty made his mark.

As far as I know, Petty stayed focused on making music in his own way and he never strayed, holding to the unpretentious, childlike spirit of trading his slingshot for a box of 45s, many of them Elvis Presley songs, when he was a kid. In his recent book Petty: The Biography, Warren Zanes reportedly wrote that “Elvis became a symbol of a place Tom Petty wanted to go. In time, the Beatles would be the map to get there.” Self-made Petty met, performed with and honored some of his own heroes, remaining active, touring and playing music he made, leaving behind a catalog of songs about life. I am one beneficiary of his having gone full speed ahead.