Music: The Diving Board by Elton John 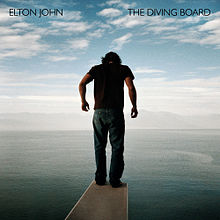 With 12 tunes in piano-driven poetry by Elton John and his longtime writing partner Bernie Taupin – in Elton’s first album since The Union with Leon Russell in the fall of 2010 – The Diving Board is even, straight and bending. Still in the same reflective blues phase – with less rock and pop than usual – his songs are mature, telling stories in an exploration that searches each theme with rhyming exposition, Elton’s 31st album is another excellent work of music.

It’s also produced, like The Union, by T. Bone Burnett. As with that album, it’s serious and gains from repeat listening. Here, too, there are no hook-laden pop singles such as “Crocodile Rock” (1973) or hits from Elton’s heyday. Like the artist himself, songs are seasoned, more authentic, with simple lyrics about Oscar Wilde, lost old men, loneliness and the dance of life. Three piano interludes (“Dream No. 1”, “No. 2”, etc.) punctuate The Diving Board, which climaxes in the title tune, and each is more urgent and pronounced. “Dream No. 3” is the longest interlude at over a minute and it strives and strains like the later middle of life. Piano dominates the album and Elton’s voice rolls along, gliding while sounding older and a bit tired here and there.

The effect is a deeper appreciation for the treasure of Elton’s work. He sings about “A Town Called Jubilee”, what it means to be a “Voyeur” or to do “The New River Waltz”, to name a few of the neatly layered melodies, besides the single “Home Again” and the rest of The Diving Board. Each of these dusty musical tales is worth listening to in the voice of the singer who jumps right into life’s complications, “arcing out wide” and often with keen insights.

Buy The Diving Board