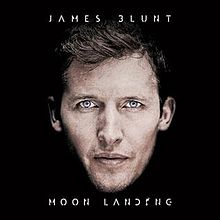 Moon Landing is in turns haunting, soulful and refreshingly romantic and optimistic. It’s the perfect new year’s pop album, though it was released last fall. With somber ballads, infectious pop and lyricism loaded with piano-laden, guitar-licking hooks, Blunt follows up the previous album, Some Kind of Trouble, with more of the same thoughtful, appealing and meaningful music. Listen for his always clear and coherent vocals on each of the 10 neatly composed songs. If you think today’s music is whiny, noisy and foggy, his fourth studio album will satisfy.

Every tune is excellent and I can’t really pick any standouts or turkeys. Some songs are slow. Some songs are fast. All of them are original to his style – if you don’t care for his falsetto voice, don’t go near the record – which is sincere, sentimental and sometimes cliched. What distinguishes Moon Landing from his Back to Bedlam, All the Lost Souls and Some Kind of Trouble is an artistic progression toward a higher, grander status as a pop star, delivering more focussed upbeat rock tunes that demonstrate a maturity worthy of a 1970s-era Elton John, especially on “Bones” and the sweet “Heart to Heart”.

I get the impression that combat veteran Blunt, who was famously ridiculed and vilified by cynics such as the Saturday Night Live cast when he broke out and profited from his hugely popular early hits (“You’re Beautiful”), doesn’t give a damn what others think. As he writes on the lilting “Postcards”:

I’m sending postcards from my heart,
With love for a postmark and then,
You’ll know that you make me,
Feel like we’ve been caught.
Like kids in the school-yard again.
And I can’t keep it to myself.
Can’t spell it any better,
L-O-V-E forever.
I hope you know that I’m,
Sending a postcard,
I don’t care who sees what I’ve said.
Or if the whole world knows what’s in my head.

Here again he displays romanticism with pride and the songs are more insistent, finished and memorable. Few artists weave solitude and loneliness into penetrating melodies as well as James Blunt, who co-wrote every tune. Heartache is threaded throughout the recording, even when he’s singing about falling or being in love, such as on “Bonfire Love”. It’s a lovely song which, like much of Moon Landing, is arranged, polished and sugared to confection. I’m well aware that this is a drawback to many if not most modern listeners, who prefer pain, torture and suffering in pop idols (Adele’s appeal comes to mind), not that there’s an absence of that on this or Blunt’s previous work. But it’s his sincerity, his seriousness, that the detractors hate about James Blunt. On Moon Landing, he counters with nothing but sobriety, love and light. Don’t miss listening to the tragic “Miss America”, which is Blunt’s tribute to Whitney Houston, his biting “Always Hate Me” and “Satellites”, insightful commentary on how misuse of technology distorts intimacy. “Face the Sun” is also a special song unto itself.