Belting out her torchy 1990s hits and threading a story connecting her to hometown Los Angeles and its intimate Greek Theatre, where she preceded Pat Benatar and Neil Giraldo, Melissa Etheridge displayed ability and an appreciation for the blues.

Teasing with a rousing cover tune of “Born Under a Bad Sign” from her forthcoming blues cover album of Stax Records songs, the best song performance of the night, singer-songwriter Etheridge impressed on a variety of skills. The raspy voice is deeper yet still strong and, without pandering to her gay female audience base, the outspoken political activism remains. Both are older and, yes, wiser and more restrained. This is the savvy artist who played on Mike Huckabee’s Fox News program, after all, and she says she still lives in the San Fernando Valley (and has an apartment in Manhattan with a view of the Freedom Tower), so she’s hardly the embodiment of left-wing intellectuals. As in the Brave and Crazy beginning of her career, Melissa Etheridge is an independent gay singer on her own.

While nodding to the times she hung out in Long Beach, a lesbian mecca like Minneapolis, Etheridge let her introspective songs of longing for sex, love and happiness—”Bring Me Some Water”, “If I Wanted To”, “I Want to Come Over”, “Angels Would Fall”, “I’m the Only One”, “Come to My Window”—speak for themselves. She tapped the early, granola-folk phase with her plaintive “No Souvenirs” and mastered every guitar she played throughout the night. But she also spoke of her struggling years in LA in chapters of coming to the Greek to see yoga-minded Sting, for whom she would open, and acts with gay male followings such as Liza Minnelli, who had invited the young Etheridge to attend her show, and Culture Club. She referred to the “glass ceiling” and hinted support for Hillary Clinton but she also derided people breaking off into “little groups” and called for Americans to come together. 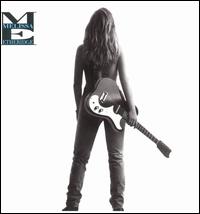 I’ve always liked Melissa Etheridge—I think Never Enough is a thoughtful album—for the same reasons I like Bob Seger; she’s a musical storyteller. I’ve bought her albums and I would have liked to have seen and heard her perform “Ain’t it Heavy”, “2001” “Christmas in America” and “The Letting Go”. Etheridge’s new song, “Pulse”, about the Orlando massacre of gay men by a Moslem terrorist is not her best. But it’s impossible to deny the cancer survivor’s talent and dedication to writing, playing guitar and singing about life here on earth. And, now, thanks to a terrific show last night at the Greek, I look forward to hearing her new Memphis-recorded blues album, too.