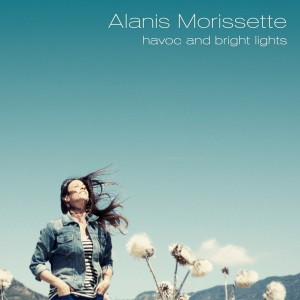 The latest album by Alanis Morissette, Havoc and Bright Lights, which I’ve listened to a few times, is neither as universal as her smashing mid-1990s’ debut, Jagged Little Pill, nor as disjointed and uneven as her previous efforts. She always writes and sings from her own personal perspective and this 12-song collection is no exception. These tunes, mostly ballads, are happier and sunnier and she expresses herself just as capably in the glow of marriage and motherhood as she did on other albums while looking back in anger. On “Guardian” Alanis sings of serving her love as the greatest honor of all. She worships her man or child on other self-improvement-laced love songs, such as “Til You,” “Empathy,” and “Spiral,” in which she recognizes being saved from unearned shame by a benevolent voice. Yet she’s anchored in reality, singing in more forceful rockers about misogyny and celebrity and, in a tune called “Lens”, about conflict in romantic love. Keeping herself sober takes effort, as Alanis admits on “Havoc”, and she makes time for her own needs, the subject of a song called “Receive”, though a standout tune, “Win & Win,” tips the balance with an upward appraisal of her newfound happiness: “We are win and win/we are equal to each other/we are flames of twin”. Musically, as on Flavors of Entanglement and Former Supposed Infatuation Junkie, Alanis Morissette favors a distorted rock sound on occasion, but the light synth is toned down and piano and simpler arrangements are back up front. Her voice sounds the same, though her vocals are somehow less intimate than on the last album, and Havoc and Bright Lights, as with nearly everything else that she does, is an acquired taste that grows on you. While her style and approach remain essentially the same, there are no stream of consciousness anthems such as “Hand in My Pocket” or “Thank U” or her underappreciated “In Praise of the Vulnerable Man”. There is lightness, balance and love in what I think is an important transitional album for a singer whose youthful anger fueled her adult happiness, confounding those who thought she wouldn’t last. Lucky for us, she did.