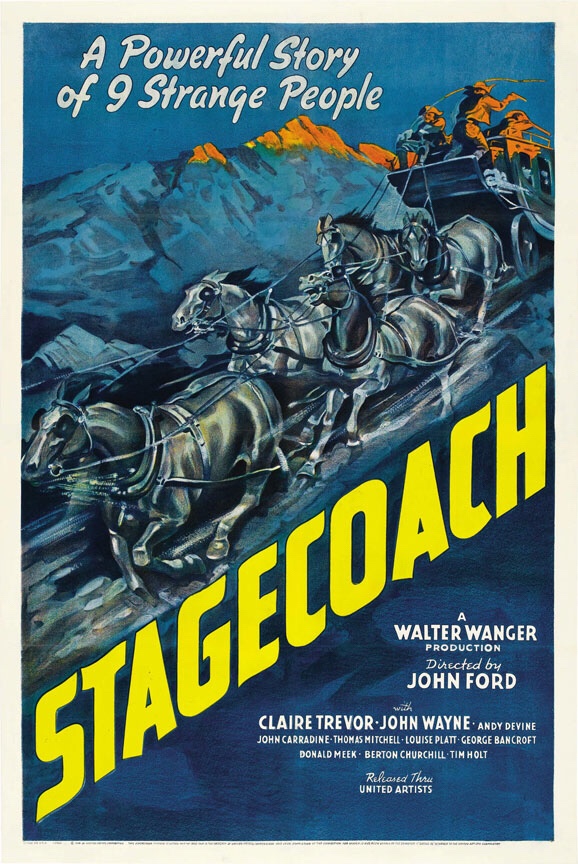 Besides my recent winter visit to Western Pennsylvania, which included a stay at the Fairmont in downtown Pittsburgh and a trip to the Heinz History Center to see the National Constitution Center’s exhibit on Prohibition before it closes, I’ve been attending screenings of Westerns at the Autry Museum of the American West. This was my first time seeing director John Ford’s Stagecoach starring John Wayne on the big screen.

I was as entranced by the thoughtful epic as ever. Read my Stagecoach review, which is posted at the New Romanticist. One of the advantages of seeing movies at the Autry is that they usually show the film in 35mm or 70mm prints in the Griffith Park museum’s Wells Fargo Theatre. Screenings include lectures by historians, scholars and other intellectuals and Stagecoach, which made John Wayne a movie star, was no exception. My review includes notes on the pre-film lecture.

The other Western I saw there is John Ford’s Sergeant Rutledge, a groundbreaking 1960 movie about a wrongly accused man (such a thing is possible, though these days you might not know it) trying to overcome racism in the West. This unknown movie, which I had neither seen nor heard of before, was introduced at the Autry with an abundance of fascinating facts and information.

Apparently, the film’s story of a wronged Buffalo Soldier is rooted in the truth about the all-black U.S. cavalry unit which was active in the Indian Wars. Blacks had been brought as slaves to Texas for ranching, the audience learned, and, following the Civil War, after so many men died in combat, blacks were often the most experienced and knowledgeable about ranching. So, black cowboys were not uncommon. Sergeant Rutledge is essentially the tale of a black cowboy who leads the Buffalo Soldiers before he is charged with raping and murdering a white woman. The leading part is played by Woody Strode (Ford’s The Man Who Shot Liberty Valance, The Quick and the Dead), the first lead black actor in a major studio’s Western. The studio apparently wanted a known black actor, such as Sidney Poitier, cast in the role. John Ford insisted on casting newcomer Strode, the Autry speaker explained, for his striking good looks and superior physique.

Besides the movie’s injustice theme, Ford was drawn to cavalry stories (as most John Ford fans know). He was fascinated by the American West, especially as depicted by artists Charles Russell and Frederic Remington, whose paintings he attempted to replicate or evoke in his motion pictures. Sergeant Rutledge is the favorite role for Woody Strode, who also appeared in the opening shot of director Sergio Leone’s Once Upon a Time in the West. The son of an interracial couple himself, Strode married outside his own race, too, to a Hawaiian princess, the Autry audience learned, and he became and remained close friends with John Ford. The former UCLA athlete appeared in several other Ford pictures and, years later, when Ford fell and broke his leg at his Southern California desert home, his only call for help went to Woody Strode, who moved in with the old movie director and assisted Ford’s recovery for four and a half months. The friendship was reciprocal, according to the Autry. When Strode’s mother died, and he couldn’t afford to pay for her funeral, Ford picked up the tab.

In an interesting twist, at least to me, I saw Sergeant Rutledge on the opening weekend of Marvel Studios’ hit Black Panther movie for Disney. What a contrast in depictions of heroic characters who are black. Other Westerns or cowboy-themed movies reviewed based on screenings with lectures at the Autry include Forty Guns (1957) starring Barbara Stanwyck, High Noon (1952) with Gary Cooper, The Big Country (1958) with Gregory Peck, Rodgers & Hammerstein’s Oklahoma! (1955) and The Virginian (1946) starring Joel McCrea.