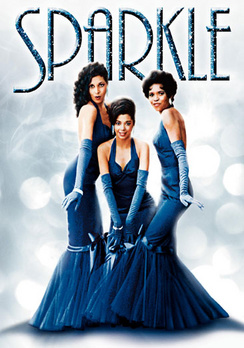 Though I love the early 1960s girl group Motown music, I was never drawn into the Dreamgirls Broadway phenomenon. I’d had friends who raved about the production, but they never seemed to express a theme or find a song that captured my interest. In 2004, when the film version came out (after Chicago had won Best Picture), I reviewed the movie and found it glitzy but forgettable. Still do. But in anticipation of Whitney Houston‘s similarly themed last movie, Sparkle, I’m adding the Dreamgirls movie and DVD review to the archives. Many do not know that the first version of the story of three black girls rising to music fame appeared in 1976. It’s also entertaining but vacuous and available on DVD. I wrote about the film, also titled Sparkle, in one of my columns in 2004:

With a movie version of the musical Dreamgirls finally out in theaters, Warner Bros. released Sparkle this week on DVD, with the picture’s three gorgeous singers decked in blue dresses they never wear in the 1976 movie. The picture’s not awful, though it lacks cohesion, and it features early work by the talented Irene Cara (Coco Hernandez in Fame), writer Joel Schumacher and a stick-thin, pre-Miami Vice Philip Michael Thomas—his character’s name is Sticks—in the best performance, a nicer cousin to the Jamie Foxx role in Dreamgirls. The 98-minute movie appears with a trailer on the disc—a second disc is a mini-album with the movie’s songs performed by Aretha Franklin—and fans of harmonious Nineties group En Vogue will recognize a scorching version of “Givin’ Him Somethin’ He Can Feel.” Sparkle, which refers to the Cara character’s name (nine years before Cara wrote and sang “Flashdance…What a Feeling”), is as thin as Dreamgirls. The trio are sisters from Harlem—not unrelated Detroit girls—whose mother, Effie (angelic Tony Award-winner Mary Alice), watches over her daughters’ troubled rise to success. Compared to glitzy Dreamgirls, it’s downright gritty.