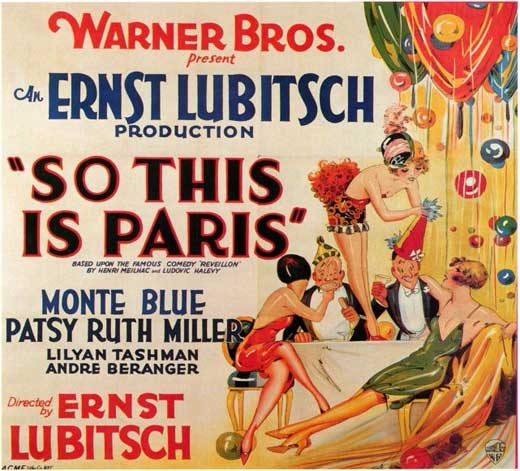 With his silent movie So This is Paris (1926), director Ernst Lubitsch, who had by then left Germany, directed Mary Pickford and become Warner Bros.’ first star director, delivers a true comedy of errors. The tale of two married couples, which I saw in 80 minutes at The Egyptian in 35mm during TCM’s 8th annual Classic Film Festival, with piano accompaniment and an introduction by film scholar Cari Beauchamp, is a loopy homage to the Parisian take on “love and liberty”.

Monte Blue stars as a married man tempted to cheat on his romance novel-reading wife (Patsy Ruth Miller) with a loose woman and former flame (Lilyan Tashman) who lives across the street. But the wife plays a role in her own husband’s temptation as she’s the one who orders her husband out of the home after sexually fantasizing about the half-naked man (expressive Andre Beranger, stealing every scene) whose body catches her attention from across the way and So This is Paris carries on and on from there, singling no one out too much and letting everyone have a moment to flirt, play and be wronged. In fact, the whole movie, with a wildly eye-catching ball sequence complete with dancing the Charleston, is really about the human desire to play and let loose.

This hit for Warner Bros., which shows the early Lubitsch touch of lightness seeded with serious ideas, keeps pace and never lets up. The wife’s too lonely and wants romance to be real. The husband is stifled and misses his former flame’s sense of raucous abandon. The other couple, too, is a bit too playful for their own good and, with a traffic cop lurking, they’re bound to pay the consequences. Look for Myrna Loy as a housemaid, watch Beranger in every scene and pay particular attention to the Artist’s Ball scenes with the lively dancing. Most of all, enjoy the early American period for Ernst Lubitsch, before his other motion picture study of married life, One Hour With You, which also screened at the film festival. So this is a glimpse of the naughty, savvy, sexually-themed good humor with which he would make some of the most enduring and enriching movies ever made.