A fine actor died after Thanksgiving. His name was Paul Walker. He was 40 years old. I first noticed the strikingly handsome, tall, blue-eyed young blond in Pleasantville (1998). Then, he starred in the first of several forgettable car chase and race pictures. In 2006, he broke out as a serious actor with two pictures – one of which, Eight Below, was among the year’s best films – including one directed by Clint Eastwood, Flags of Our Fathers, an awful apologia about World War 2 in which Walker was also very good. 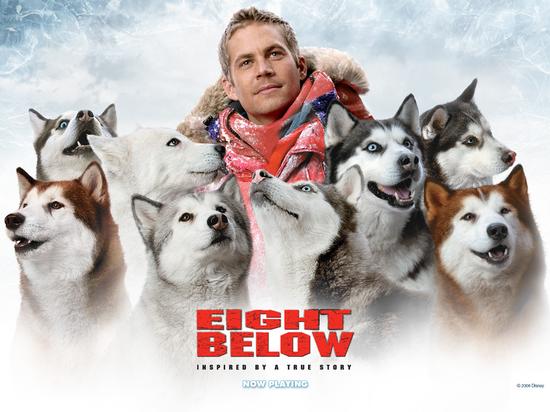 He wasn’t just a pretty face; he could act. I remember one crucial scene in the gripping Disney movie, Eight Below, about his sled dogs being stranded in Antarctica. His character, Jerry, was rescued from the icy location during a brutal storm and he had to leave the adorable dogs behind. It was agonizing. his character was an athletic, silent leader. The type you’d expect would bond with animals in an instant. As the rescue plane lifted off, Walker’s Jerry was deeply wounded in physical and psychological terms and it showed on film. The dogs made the movie but Paul Walker carried the picture and made it both urgent and realistic. His deft touch played off his good looks, threading humor, endurance and strength into the character in an engaging performance. He had a real shot at being one of the world’s top actors. His loss is shocking.

Walker is part of the reason I said what the heck a few years ago and saw one of those Fast and Furious movies, which are not my type of film. I was stunned to find that I thoroughly enjoyed it. Walker’s nonchalance – he had that down pat – and interplay with the Vin Diesel character made it more exciting and plausible and compensated for all the vulgar sexual innuendo and predictable plotting. I saw another of the films in that series and liked that one, too. I’d planned to see the unfinished new one with Walker this summer. He’s gone now, an adventurer in every sense – he was apparently fascinated by marine biology and immersed himself in physical action in both life and work – who lived his adventures, including tagging sharks, self-defense and the sports car driving that killed him and his friend Roger Rodas. Whatever happened on the Valencia, California road (an area I know well), Paul Walker improved nearly every movie I saw him in. I mean it. May he rest in peace.