Reviews: ‘A Star is Born’

This year’s forthcoming new version of A Star is Born, judging by the trailer, appeals to me for various reasons. 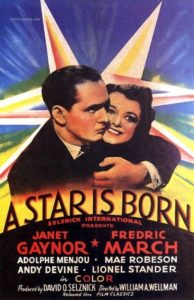 First, it’s based on a great story first created, written and dramatized in motion pictures by William Wellman (Wings). Second, its leading man and director, Bradley Cooper (New Year’s Eve, Silver Linings Playbook, Aloha), strikes me as a potentially great actor and movie star; he delivered one of the most remarkable screen performances in 2014’s best movie, Clint Eastwood’s outstanding American Sniper, and he demonstrates skill in choosing movies with strong themes about man as essentially self-made, which could prove to be crucial in the new adaptation’s success. Third, the new movie co-stars the pop music singer known as Lady Gaga as the leading lady. Like Gaga’s predecessors in the role of the main female character, Janet Gaynor, Judy Garland and Barbra Streisand, this woman is extremely talented, as she’s proven time and again with her songwriting and musical performances, which have also been controversial. Apparently, Gaga has written at least some of the new movie’s songs. Gaga and Cooper come packed with talent and look like a good screen couple.

The theme for A Star is Born is both universal and newly relevant. I had never seen any of the movie versions, though I’d caught parts of the Judy Garland film, which I think is chiefly how the pictures are known and remembered, and I did not have any desire to see them for a long time. This spring, I attended a film festival and I noticed that the original picture was directed by Wellman, whose movies are generally very good and whose silent Wings is breathtaking. So, I was newly motivated to see his original version, which I came to understand was, like Wings, co-created by William Wellman. I attended the festival screening at Sid Grauman’s Egyptian movie palace and saw the original A Star is Born for the first time. I was astonished at its quality. I was deeply moved by its depiction of a fading movie star’s intersection with a starlet whom he discovers, coaches and loves (read my review of the 1937 movie here).

Self-interest drives A Star is Born. Recent movies, such as 2012’s best film, The Artist, and 2016’s best film, La La Land, also put the pursuit of happiness in show business at the center of the story. They both recall the original’s splendor, romanticism and glamor, yet also integrate life’s anguish, realism and hardship. In this sense, because it depicts (or attempts to depict) redemption in the wake of an epic downfall, the central theme of A Star is Born radiates. Strictly speaking of the original, thanks to the performance of its leading man, Frederic March, as Norman Maine, it accomplishes this effect with a graceful balance of logic and clarity. The film’s final conflict resolution hinges this balance on an unforgettable act of free will. The result is cautionary, poignant and, ultimately, resilient. In other words, it’s what civilization needs now. 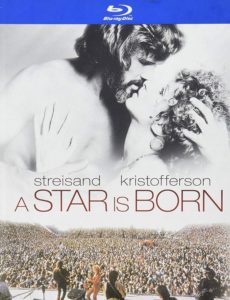 Wellman brought this passionate contrast of agony and ecstasy to his similarly heart-wrenching Wings. Subsequent Star is Born remakes, however, fail to recapture the 1937 movie’s transcendent vigor. They do so by failing to appreciate the original’s delicate and vulnerable portrayal of movie star Norman Maine. Both remakes recast the female star as the focal point (they also recast her as a musical, not a dramatic, star, which permits each remake to showcase the talents of its leading ladies). But what imbues the movies’ title with meaning is that the birthing comes as a byproduct of a union. The 1954 adaptation relies too heavily on its overburdened star, Judy Garland (read my review here). The 1976 version also overplays its leading lady, Barbra Streisand (read my review here). Both do so at the expense of the male character, whose complexity is critical to closing the successful climactic arc.

This is why I wish Bradley Cooper success with his new version, set to debut in movie theaters this fall. This delicate, romantic story of idealism, despair and rebirth comes in an ominous and I think potentially cataclysmic time of alienation, disintegration and loss of privacy, rights, rational discourse, unity and sanctity of life. What makes A Star is Born so penetrating a portrait is its multiple layers of psychologically complex and interesting artists who love life. See the helplessness of the one whom everyone assumes has all the power and privilege in the world. Watch what happens to the one upon whom everyone confers sympathy, adulation and praise. Let the bliss of romance cast its glow over the industry that promises to elevate the best to light up the world, yet observe that, if maligned and ignored, the best when it’s sinking and needs life support can be crushed — and think about the role of the collective and the supremacy of the one.

A Star is Born 2018,  if it recreates, preserves and protects why A Star is Born 1937 urges the audience to worship man at his best, especially when it means tending to him at his temporary worst, can fire up a torch in this spiraling, darkening world.