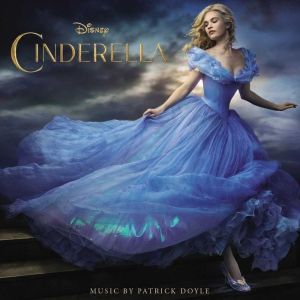 The Cinderella soundtrack is as lush, romantic and evocative as the film.

From the happy childhood theme for young Ella whose businessman father remarries following the death of her mother to the wicked stepmother music and the sweeping themes for the prince and his beloved, Patrick Doyle’s music is matched to what may be the year’s best picture.

As I wrote in the Cinderella movie review, Kenneth Branagh’s live-action Disney feature is a deeply emotional and thoughtful epic about an innocent child who becomes a woman, the man who falls in love with her at first sight, their losses, trials and injustice by those who betray the best within and what it properly means to be rescued. The music (available through Amazon; click on the soundtrack cover to buy) is only fast and urgent in “The Pumpkin Pursuit” and cues and pieces for other action scenes that play better here than on film. Favorites will depend upon which of the movie’s multiple layers of subplots, themes and pictures resonate, from the father-son moments, which are some of the best ever made in Hollywood, and mother-daughter scenes, to hard, painful scenes of the evil woman who comes to enslave the child. My personal favorites constitute triumphant picture music (“Ella and Kit”, “Valse Royale”, “A Secret Garden”) of the happy couple letting go of the past to embrace a new, self-made future. “You Shall Go” is also glorious, underscoring that the fairy godmother, a beggarwoman, is the antithesis of the hyperfeminine matriarch. “Who is She” brings the ball to the forefront of one’s memory. “The First Branch” tenderly calls upon the film’s parent-child love. “Courage and Kindness” does nicely by the theme of the whole man. A couple of pop songs are included, though, unfortunately, Disney chose not to include the film’s “Lavender Blue” song.

Mr. Branagh worked well with composer Patrick Doyle, whom I first discovered in 2003 with his wistful score for Tim McCanlies’ Secondhand Lions, on Thor for Marvel (2008) and their collaboration also succeeds here. The charming, serious and intricately detailed Cinderella, an essentialized indulgence in old-fashioned romanticism blended with a radical rejection of conservatism, is both rare and original. That Patrick Doyle’s score is as slow, gentle and romantic as the movie makes for a perfect fit. So this is what falling and being in love sounds like.

Buy the soundtrack for Cinderella (2015)