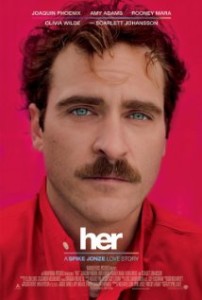 Her is more like a strange and abstract character study than a motion picture. It is more like a mood piece than a piece of cinema. The story such as it is concerns slices of life for one lonely divorced man who, like many, possibly most, straight men in today’s culture, whines about life, obsesses about technology and thrives and suffers – all while seeking it out – upon total faith in and submission to the post-feminist, domineering female.

In Her, brought interestingly and neurotically to life by the talented, bizarre Joaquin Phoenix, the center of his world is voiced by Scarlett Johansson as an operating system. Her makes the case for approximating intimacy as against having it for real in a world where intimacy is often itself faked and approximated. The man with pleading eyes writes greetings for some nondescript company in some nondescript future of Los Angeles. Life in the future is dismal, gray, slow and cold. Much like it is today. People are constantly detached and disaffected in chronic transit and transition and going nowhere fast. The world is full of lonely souls, to paraphrase Jackson Browne, only more so. None more so than Phoenix’s sad, near-suicidal sack.

He falls for the OS in waves. It seems impossible to contemplate how this could happen but it does and, just when you start anticipating the sex issue and how to deal with that major obstacle, him and her have a plan for that, too. It still seems unlikely to succeed, as society starts to migrate into more such relationships with people’s heads down, minds buried in their machines, but then the evidence mounts that makes one think. His character gets out to the beach, publishes a book, makes connections with other humans, all for the first time. He even makes peace with his failures in a way. Along the way, a friend and neighbor (Amy Adams) experiences similar pangs of loneliness. Like the automatons in The Time Machine by H.G. Wells, they march with faith in the tradition of whatever technology toward nothingness. Her tells it and shows life as it all too often is, prompting the audience to think. Adept at creating a sense of the solitary and dramatizing how people substitute tech for life as they mistake egoism with egotism (particularly those who advocate for the former), Her is an intriguing lesson, though nothing more. At best, the ponderous picture makes one aware of man’s relationship to machines and man’s capacity to build machines to impair or enhance one’s life, leaving such questions unanswered.

Her in all its weirdness mirrors what the West without Western philosophy becomes: a world of men and women who do not connect; a herd of cynical, insular narcissists with no clue how to move the world let alone make progress for whom the most advanced technology is greased for the most primitive regression. Will they reclaim what ego remains and restore themselves to human splendor? The answer filmmaker Spike Jonze provides leaves it up to the audience.