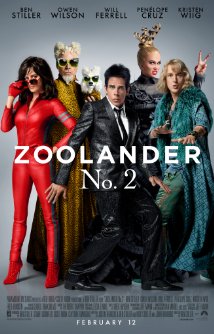 Benedict Cumberbatch steals the show as usual in a controversial cameo and other broadly silly and satirical bits—they can’t reasonably be called anything else—are humorous in Paramount’s ridiculous Zoolander 2 with Owen Wilson (Midnight in Paris, She’s Funny That Way) and Ben Stiller (Tower Heist, Little Fockers). Though not as consistently silly as its trailers suggest—certain scenes appear to have been cut—it’s what you’d have reason to expect from a Ben Stiller movie co-starring Will Ferrell (Get Hard, Land of the Lost, Step Brothers).

Zoolander 2 is solidly in the absurdist comedy genre, which is so ubiquitous as to be dominant in today’s major mainstream feature comedies. Ferrell is more explicit in his nothingness. Stiller, however, retains some sense of logic, plot and theme, and his work, such as the Night at the Museum series, is relatively innocuous as far as these pictures go. So I thought I’d see it the week of the nation’s first presidential primary, in which a nationalist and a socialist won major victories, demonstrating that, these days, the absurd is becoming the norm as art imitates life. It doesn’t get sillier than Zoolander 2, but at least there’s a whisper of a point and decent satire in short skits.

A dim-witted fashion model (Stiller in the title role) returns 15 years after the original movie and partners with another ex-fashion model (Wilson) and they go to Rome where they’re recruited to solve the mystery of murdered pop and rock stars. Penelope Cruz plays a police woman and Ferrell is a villain and the movie’s theme, wispy as it is, involves the Garden State ex-model played by Stiller and the Golden State ex-model played by Wilson while they attempt to overcome their faults and shortcomings to solve their fatherhood problems.

Too many cameos to mention include walk-ons by Willie Nelson, Susan Boyle, Susan Sarandon, Katy Perry and Sting and many others in outrageous scenes of sex orgies, bestiality, Satanic ritual and biblical teachings. It’s all preposterous and some of it’s hilarious, though Zoolander 2 is not as uproarious as its marketing suggests. The best acts include a fashion designer whose gibberish mimics today’s hipster or hip hopper spouting a constant stream of anti-conceptual communication. The writers, and there are at least four or five, really get that spreading nonsense down pat. The funniest scene involves an appearance by Benedict Cumberbatch as a Hedwig–ish creature which is neither male nor female—the first to enter into a state-sanctioned “mono-marriage” apparently to itself—which has apparently riled some in the so-called transgendered community. Gay jokes abound, naturally, with Ferrell on board and as raunchy as it sounds Zoolander 2 is also tamer than it sounds even with all the passing winks, digs and inside jokes about Bible stories, rock stars and the fashion industry.

The comic climax comes with a mind-over-matter overlay that’s as meaningless as Zoolander 2‘s premise. Everything here ends up as a smattering of nods to various subcultures, from kinky sex and 80s’ New Wave to The Da Vinci Code series. If Zoolander is today’s equivalent of Hope-Crosby Road pictures, or as close as the culture permits, making those movies look like art by comparison, it’s hard to imagine that comedy can get much worse. The mixed Zoolander 2 could have been better. But, in a week with election results that make you want to cry and laugh at the same time, remember that it could have been worse.