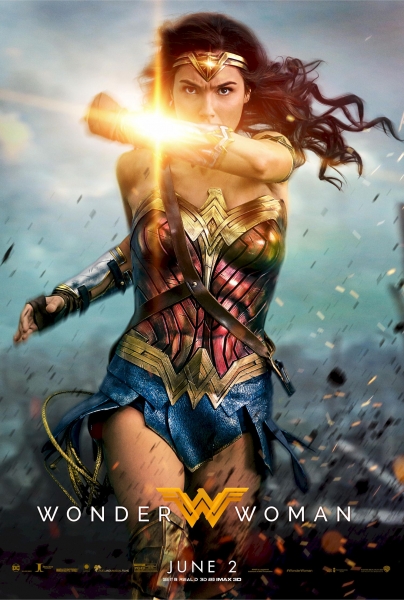 The summer’s big hit, Wonder Woman, features a heroine and certainly has some wonderful moments, though it leaves me underwhelmed. From the start, when the main character, Diana, admits in voiceover that she “used to want to save the world” before delving into the World War 1-set story, the DC Comics-based fantasy hints at an anti-romantic theme.

While it is decidedly mixed with larger than life action, Wonder Woman lands its anti-romanticism on the mark. Girl meets boy but barely has him to lose. They go to war after an extended mythology setup, though it never gets to the roots of war. Conflict never lets up, as is often the case with comics-based pictures, the earliest of which (Captain America, Iron Man, Thor) I’ve enjoyed, though they’ve become bloated, artificial and generic. Wonder Woman is warrior Diana’s origin story, so it’s all about war.

Except that there’s not much war in Wonder Woman. Other than a beach battle, a village countersiege and two protracted military assaults, the long running time doesn’t contain the battle action one might expect. Like Xena the Warrior Princess TV series, and Wonder Woman is episodic and televisionary, it’s focused on woman at war. In this sense, because of the novelty, it’s often involving.

But the goddess-superheroine contemplates, prepares for and talks about war (superficially, I must add) more than she wages it. Diana (extremely fit and sufficiently expressive Gal Gadot as an adult) trains as a warrior thanks to her aunt (Robin Wright, A Most Wanted Man). Diana goes off to war with a downed spy pilot (Chris Pine, The Finest Hours, Into the Woods, Star Trek Beyond) to find the god of war and slay him in a subplot with a resolution that’s not hard to guess. Diana gets a London makeover, enlists, helps and surpasses Pine’s spy and his requisite band of misfits and they go off to stop World War 1’s chemical warfare. Some of the music, photography and scenery is stunning. Gadot’s natural and engaging, especially with snappy comebacks such as “I’m the man who can.” Pine’s well cast, too.

Early on, there are clues that the larger than life mythology and episodic story won’t exactly meld. After all the buildup on the elusive, warrior women’s-only island, where Diana’s queen mother (Connie Nielsen, Gladiator) rules, everyone looks fit and fabulous in their skirts, headgear and hairdos but no one appears interested in keeping up with the rest of the world, for self-defense if nothing else. Diana ages from child to young adult and, inexplicably, stops aging after that. The trip to London from the island on a sailboat looks and feels as artificial as it sounds. Being paid to deliver exactly what the boss wants is compared to slavery. It’s easier to overlook these shortcomings because the cast, including David Thewlis as a pacifist and Lucy Davis underused as a secretary named Etta, is spot on under Patty Jenkins’ direction.

Part of an entire Justice League series for Warner Bros. with at least four credited writers — all men, incidentally, not counting the character’s male creator, which I mention because much has been made about the fact that this hit movie is directed by a woman — Wonder Woman is thrilling and fun in spots, such as when Diana steps into the battlefield to lead and inspire others to charge and fight. Diana doesn’t know her own power which I think is intended as the movie’s theme. The world is lacking movies about heroes, though Snowden and Sully are good recent movies about heroes in this regard, let alone heroines. So, a movie about a goddess who fights for peace certainly has enjoyable charms. The way Pine’s spy looks at Diana after she shows her strength and innocence is a welcome twist on the comic superhero genre.

Wonder Woman is not more than that, though, and, when it introduces ideas it never addresses or resolves, such as free will and an undefined conflict between belief and whether humankind deserves to be saved, it’s as lost and fantastic as that island of primitive women somewhere out at sea. That and a mass murderer whom, it’s implied, was a victim of the patriarchy and the lack of suspense inherent to a movie with a plot climax about a world war which some people may know something about mean Wonder Woman is best viewed as another comic book-based movie which entertains with light, occasionally marvelous heroism never made realistic and with flat, bleak outcomes for man and woman alike, if you think about it.