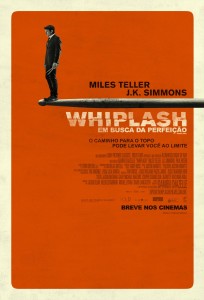 Dramatizing single-mindedness, Whiplash, by writer and director Damien Chazelle, is a thought-provoking movie about what it takes and means to hold yourself in high esteem. Young drummer Andrew (Miles Teller, Divergent) begins to learn at the outset from his master (J.K. Simmons, Spider-Man) during an interrupted solo session when he doesn’t even realize that he’s being taught. That his first instruction is a brief, powerful exercise in how to listen to the teacher fits the film’s theme that great work is ultimately learned, practiced and mastered alone. Whatever praise the pupil deserves that does come from others, including the brutal teacher, must be earned. Andrew’s estimate of himself comes first.

This is one of life’s most important lessons, delivered here in terms of jazz. Chazelle reaches his theme on many levels, overpowering Whiplash with Simmons’ remarkable performance as an emasculating music conservatory teacher who is a tyrant to seed the finer parts of the story. “Watch your step,” a sign reads during opening scenes. This applies to the prodigy, who lives alone with his single father (Paul Reiser), a writer who mixes Raisinets with popcorn and serves as a contrast to Simmons’ overbearing character. If the teacher is too hard—in fact, he’s beyond harsh—the parent is too soft. Their student and son, Andrew, represents the potential for the whole man—one who is exactly right. The bright young student wholly commits to the pursuit of excellence, to getting to practice on time, to feeding his talent for drumming by studying music, bandaging bloodied hands and focusing on each lesson a teacher’s tirade is presumably intended to yield—all while balancing romance with a girl who works at the local movie theater (Melissa Benoist).

Winning a spot in the core band is Andrew’s goal. Understanding that being the best means enduring the worst is depicted as Andrew’s unintended gift.

This more than anything may be the near-psychotic teacher’s point, which may come too late when rivals step in, compete and, one by one, rotate in a taut, tense drive to compete with other drummers and perform for prizes. The cast is excellent, especially principals Teller and Simmons but also Reiser as the second-hander parent and Benoist, who shines in an agonizing scene as the young woman.

The story is full of conflict and resolution, culminating in a climax which finally, entirely and properly takes place out of school, among the living, where practice meets theory in an unforgettable exchange. The stakes are high—anxiety, pressure, suicide come into play—especially for coddled, entitled generations for whom the Simmons character renders a sadistic blend of practice, contempt and deliverance. Whiplash comes with melodramatic predictability and horrifying methods based on the notion that reaching one’s potential precludes quiet guidance and encouragement. But, in Andrew, there are multiple layers of precise and pointed wisdom about activating the best within. The sting is primarily and intellectually motivational—observe Reiser’s father as a foil and what happens to the teacher—and it emanates from the crackling mind of one man, his instrument and whether he earns an upward glance, including everything it gives and takes.

Whiplash is extreme, which is to say it’s condensed, stylized and exaggerated in generating suspense and expressing its theme. In dramatizing something that everyone should already know—that being the best entails an exhaustive expenditure of effort, which, sadly, most no longer consider, let alone think about—the film seems to sanction the view that gaining value necessitates inducing pain and suffering. The creative mind atrophies and expires without proper recognition and encouragement and the conviction that achieving one’s values is possible. In this regard, Whiplash takes positive reinforcement for granted. But the artist achieves greatness through single-minded commitment and this Whiplash delivers with verve. That it feels revolutionary is evidence that the culture is abundant in the other, wilted, kind of movie about genius—movies depicting men of ability as deficient, such as Rain Man and The Aviator—which makes Whiplash, despite its wild-eyed music teacher, no less a movie that’s very well done.