Movie Review: A Most Wanted Man 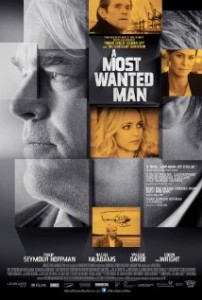 A Most Wanted Man takes place in Hamburg, Germany where, as its opening reminds the audience, the lead hijacker of the worst attack on the United States in history funded, coordinated and planned the act of war known as 9/11 while blending into Western culture.

The movie based on John Le Carre’s novel resembles the spy novelist’s bleak The Spy Who Came in from the Cold, with the late Philip Seymour Hoffman in the Richard Burton role. This intricately plotted motion picture is not about 9/11 or the scourge of Islamic terrorism that has engulfed the world, with an emerging caliphate as history professor John Lewis and right-wing talk radio hosts forewarned, despite its thematic teasing. The film is an interesting if unconvincing and unsatisfying take on the workmanlike spy in today’s modern spy state. Does he act on principle? Does he empathtize with the enemy when saddled by his own bureaucracy? Does he bend to them – or does he make them bend to him – or does he have some higher purpose?

Burton covered this territory with similar results. Though its story is enigmatic, its theme is relatively benign. We’re only human, or something like that, and the surveillance-industrial complex is self-perpetuating. Getting there is half the fun, or drag, depending on one’s viewpoint and tolerance for Le Carre’s winding plots, and Hoffman gives his all as a spy named Gunther who doubles as a chain-smoking barfly who may or may not be a closet idealist. In the context of A Most Wanted Man, which of course could refer to several different characters, this means believing that observant Moslems can depart from the path of jihad and come to know peace without blowing people up. The international (does anyone use that word anymore?) and all star cast – Willem Dafoe, Rachel McAdams, Robin Wright – keeps piling characters on to the plot but in a way that makes sense.

Take a Moslem who preaches that Islam is a religion of peace, a shady Moslem illegally immigrating into Germany who’s been tortured in Turkey and Russia, a Moslem safe house with a boxer and his mother, a left-wing lawyer, agnostic banker, traitors, spies and cops and add such tantalizing subplots as whether it’s possible to change the tortured Islamic radical. What you get is a tense thriller with shaving and bathing Moslems, encircling Germans, Americans and other Westerners waiting to maneuver, bait and pounce and two hours of waiting for a bomb to explode, all while wondering who’s on who’s side. By the time the teasing’s over – fueled by gallons of booze, cartons of cigarettes, freighters, backpacks, prayer rugs and mosques – A Most Wanted Man more or less pays the claim with what its main man most wanted.

Don’t expect nonstop excitement, as this is not to be confused with anything featuring Jason Bourne. Hoffman portrays a character that, like Burton’s jaded drunk in need of redemption, is on one long binge toward death, frankly, sucking in nicotine and alcohol and daring reality to take him down, down, down while waging a private war for people to act up. This may be why the picture, which has the courage of its convictions if not exactly the necessary facts in evidence, opens with an image of a single wave bringing up dirt and grime in Germany. A Most Wanted Man will not change the audience’s minds about whether Islam means peace, or whether would-be Mohammed Atta types can be persuaded to turn from faith toward reason, and it’s not entirely designed for that purpose. This is not Hoffman’s best performance (it is too incessant and mannered) but he dominates the picture, takes the lead and follows through to a stunning if not entirely surprising conclusion. The plot boils. Philip Seymour Hoffman keeps firing up along the way.