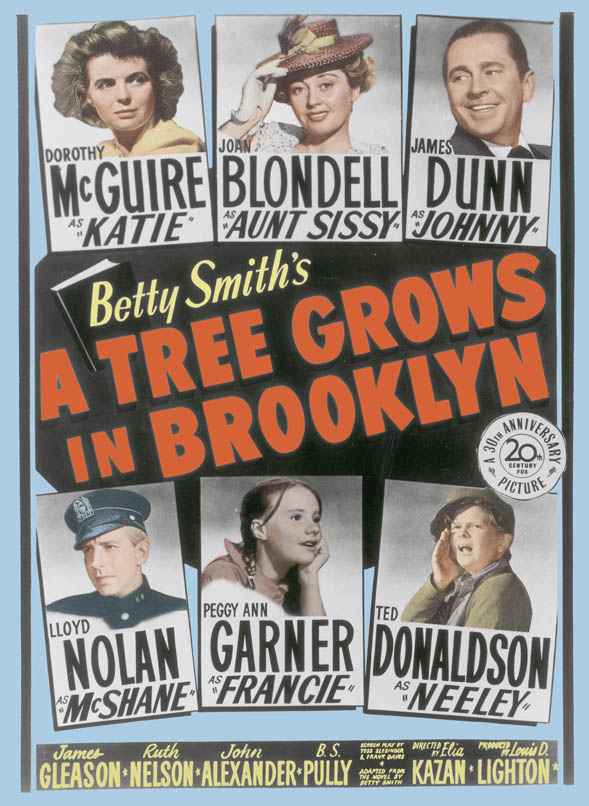 At its roots, director Elia Kazan’s first motion picture, an adaptation of Betty Smith’s novel A Tree Grows in Brooklyn, is a deceptively taut dramatization of an alcoholic’s family. This could be anywhere in the United States, really, and the essential plot and characters would ring as bitterly, poignantly true as they do here. Screened by this reviewer on the big screen for the first time in Hollywood at the 2016 TCM Classic Film Festival (more on the screening later; read about festival here), I had seen it in home theater years ago and knew that the conventional wisdom about Kazan’s 1945 debut is that it’s about an immigrant Irish family struggling to survive in New York City.

But it’s not. Each of those aspects of the Nolan family is understated in the script; what matters is the action through the choices of each character, from father Johnny (played by James Dunn, a fallen star who apparently struggled with alcoholism) to his two kids and wife, played by Dorothy Maguire in one of her best roles. Peggy Ann Garner gives one of the greatest juvenile screen performances as Francie Nolan. Ted Donaldson, who introduced the screening, plays younger child Neeley, the film’s comic relief.

The action takes place in Brooklyn at the turn of the 19th century, when the Industrial Revolution is transforming lives and radically improving the culture. This is evident in the character Francie (Garner), who desperately wants to become a writer, and her Aunt Sissy (Joan Blondell at her best, reminding me of a saucier Scarlett Johansson), who has an opportunity to aspire to the middle class life in the nation that arguably created the middle class. Everyone from the barkeeper to the policeman (Lloyd Nolan shining in the role) is on the upward trajectory.

Not the Nolan family, however, who are held back by waiter Johnny’s drunkenness, negligence and inability to provide for his poor wife and kids. His strengths are known in time but he’s made dreams his master, to paraphrase Kipling’s poem, and he’s unable to cash in on capitalism. Amid gay tunes, frolicking children and a trolley car salute, Johnny’s cheerful disposition comes at the expense of his burdened and embittered wife, Katie (Maguire) who must be the mind and body of the family, depriving her of dreams, goals and soul. Maguire’s tired eyes and downward vocal tones mark the decline in a characterization that calls across the ages to all those betrayed by their loved ones and themselves through drink, dysfunction and moral evasion.

This leaves Neeley and Francie with a harsh mother who’s a chronic reality check and killjoy—”Mama said” is the kids’ sad profession of faith—though they make their own way in the exciting new world, roaming the five and dime, playing with worldly Aunt Sissy and bantering with one another in competition and in code, the language of all children of alcoholics walking on eggshells trying to navigate the secrets, the anger and the shame. Kazan (On the Waterfront, Viva Zapata!) navigates, too, keeping steady command of this powerful movie with a constant focus on the characters, not a showcase of the world they inhabit, at Christmastime, in classroom and Manhattan’s distant yet distinctly accessible skyline, a quiet character in its way representing the film’s physical, spiritual, industrial and American ideal. Agonizing scenes of hardship and suffering and all, there is an abiding worship for the new world in every frame.

Brilliantly rendered details move the plot toward its tragic and bittersweet titular theme that progress is possible at any stage in life, even when life seems impossible—closeups of the child in a moment of realization, a gesture with rosewater, shadows on the wall—such as a song played on a piano and sung from the soul or a rooftop compact between cohorts. The snow and hard rain that build to the climax gently but insistently slow to rhythmic drops symbolizing a child’s answered prayers. When the child’s compositions are delivered to the mother as Katie gives birth literally and figuratively—to a conscience; a new awareness of herself, motherhood and joy—the family is made good and whole, with one final, crucial reward to come.

The result in Elia Kazan’s black and white A Tree Grows in Brooklyn is both wrenching and liberating, which makes this movie unforgettable.

TCM writer Jeremy Arnold interviewed Ted Donaldson (who played Neeley) before the TCM Classic Film Festival 2016 world premiere of the restored print, which was, in fact, pristine to my eyes. Donaldson said he’d grown up in Brooklyn and that he recalls Elia Kazan (On the Waterfront, Viva Zapata!) convening the cast around a giant, viking-style table and instructing everyone that this movie is a small story about people’s desires, tensions, ambitions and problems and how they try to solve them—and that, if A Tree Grows in Brooklyn isn’t about that, it isn’t about anything. He made the audience laugh when he talked about Blondell’s “ebullient sexuality” and admitted his boyhood crush on the actress, who let him sit on her lap. Later, Donaldson said, she gave him an autographed picture of herself with the inscription: “With love from Joan…I’m waiting for you.”