I, Tonya by writer Steven Rogers (P.S. I Love You, Stepmom) and director Craig Gillespie (The Finest Hours, Lars and the Real Girl) is a scathing indictment of American culture. Starring Margot Robbie (The Legend of Tarzan, Goodbye Christopher Robin) as U.S. figure skater Tonya Harding, the film satirizes today’s lynch mob-media culture, tracing it back to its surge in the nasty 1990s, climaxing in the year 1994, when Harding’s winter Olympics contest with teammate Nancy Kerrigan took the country by storm after Kerrigan was brutally downed in an attack. 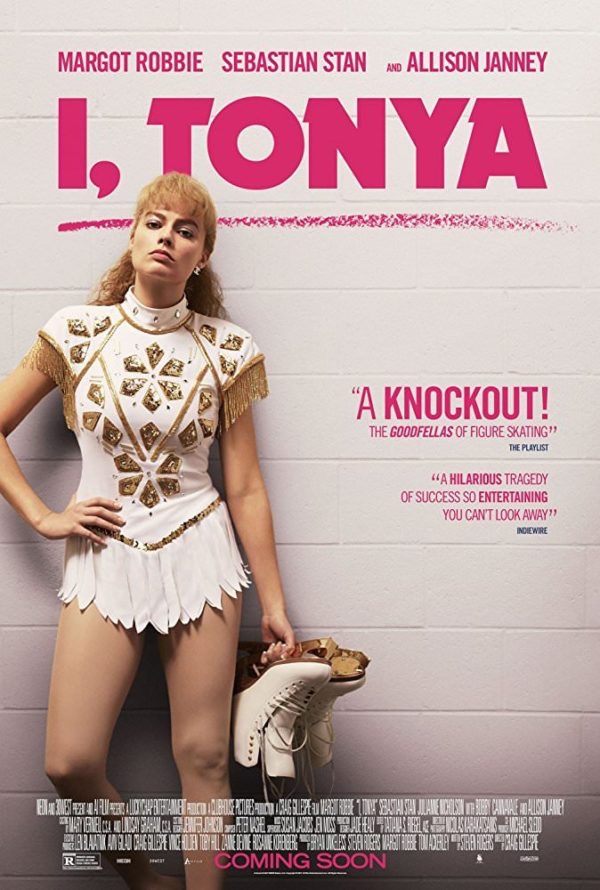 Of course, 1994 was the year the butcher of Brentwood, O.J. Simpson, took the media by storm, too. One of the best and undersold aspects of I, Tonya is its ability to turn sarcasm and satire upon the audience, public and nation, morphing the movie into a proper reflection of this rotting America. Simpson is a perfect counterpoint to Harding in terms of measuring the injustice of trial by public opinion.

This is a fictionalized movie based on fact, not a documentary, and titles clearly mark the source material. But Gillespie, whose movies tend to take intense interest in the roots of human action, and writer Rogers, whose scripts tend to portray women as intellectually strong and rational, combine their talents with Robbie’s outstanding performance (she’s a producer here as well). The result is an entirely absorbing satire which trims its humor until what’s left is the raw, bitter truth about a victim who is prejudged as a caricature and sent down the media grinder. Bobby Cannavale plays a Hard Copy tabloid type who rightly observes that his tawdry show was disowned by mainstream media — before the media aped trash media and became just like it.

Indeed, trash — the exact term the media and skating subculture tagged to Harding — describes what became of American culture in the Nineties. Hard Copy and CBS hosting the Olympics leading the way, the New York Times and New Yorker now traffic in the same unsubstantiated smut, smearing and insinuation. As Harding, Robbie is simply amazing. She captures every bit of the young athlete’s harsh exterior and wounded interior, qualities which were always apparent and made Harding’s skating and melodramatic behavior so involving to the public. Robbie portrays every physical, mental and psychological development in the Pacific Northwest-based Tonya Harding story; the muscular, frizzy-haired, foul-mouthed skater with braces who tried too hard, ruthlessly schemed and competed and reeked of ordinary insecurities.

Harding also skated a triple axel, which I, Tonya doesn’t diminish. It lets this achievement sneak up and sit there, in front of you, over and over. Eventually, as various characters break the wall in first-person narratives after the facts, the audience realizes they’re laughing at the expense of someone’s ability or attempt to acquire knowledge and develop her ability, to the extent figure skating is and/or should be considered a sport (and one of the issues the movie raises is how Harding’s hard athleticism is subjugated to poise, frills and beauty).

If she’s always spouting lines such as “it’s not my fault”, and she is, her mother (Allison Janney, arch as ever in a butch bowl haircut) explains why. This woman is an example of the worst type of parent. She embodies horrible ideas — self-sacrifice as a virtue, man-hating via feminism, brute strength over rational thought — and she means it. Janney’s terrific as always, and it’s not her fault if critics and audiences find her characterization fundamentally funny. Watch her character from frame to frame for a portrayal of pure evil. Even her musical cue, Cliff Richard’s “Devil Woman”, one of many on-target pop song choices in I, Tonya, warns the discriminating audience of what’s to come.

“Kiss yer muther goodbye,” Janney’s working class mother seethes to her daughter early in the picture in another clue about why she hovers over the child. How could Tonya Harding not be drawn to a wife-beater like the man she marries (Sebastian Stan, Captain America, Winter Soldier, Civil War, The Martian)? In scene after scene, Harding is tossed between the two like a punching bag between boxers, ending up as bruised, nasty and embittered as you’d expect. When she spits a vulgarity at a judge, you wonder how she’s kept the anger in check for so long.

But, on some level, with her coach Diane (Julianne Nicholson nailing every scene) as the most rational person in the movie, Tonya Harding loves to skate as sport. Despite the monstrosities of the irrational motivations instilled in her, and the delusions that burrow around her rise to fame and lead to the assault on Kerrigan, this much comes through, complete with end titles and scenes that let the audience decide for themselves what to make of the damaged athlete who did her best.

More than anything, I, Tonya casts doubt upon today’s Me, Too culture of prejudice, rash, snap judgments and high and mighty moralism. It makes you look at a 23-year-old skater based on facts, transcripts and performance. With a David Letterman Top Ten bit as bait, complete with Letterman’s own brand of vulgar humor at the expense of someone’s race, I, Tonya does so through the lens of your own tendency to fall for sarcasm, cynicism and lynch media-driven mobs.

Is what happens funny when it happens to you? Tellingly, the jaded, young audience I saw this with in hardened Hollywood went from tipsy sneers and snickers to tears during the show.

The movie doesn’t exonerate Tonya Harding and it doesn’t pretend to try. Instead, to the tune of Siouxsie and the Banshees’ version of “The Passenger” as an angry, weary cry against the status quo, I, Tonya depicts the byproduct of bloodlust in realistic terms. What’s left is a downtrodden woman cast out, putting on a mask, with too much rouge, a vulgar mouth and a harsh shade of lipstick. The skater branded a tough tart may have had a hand in doing something very wrong and she certainly accomplished something exceptionally good. I, Tonya shows what making fun of everything costs everyone, especially someone with skill and the desire to be the best.