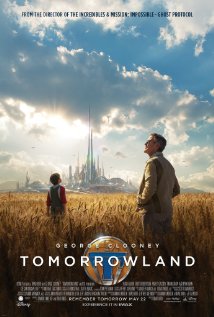 In the tradition of The Lone Ranger and John Carter, Disney lets co-producer, co-writer and director and two-time Oscar® winner Brad Bird (The Iron Giant, Ratatouille, The Incredibles) loose on its theme park concept, Tomorrowland. The result is an incomprehensible clunker starring Academy Award® winner George Clooney. The conception and execution is so poor that it’s hard to pinpoint where it goes wrong.

On the upside, as with Bird’s Iron Giant and Incredibles, the central theme that idealism and free choice power the future is a fine idea and the film’s second half is better. But this is not saying much in a movie as broad and convoluted as Tomorrowland. Everything is short, fast, overdone, fragmented and demographically driven. Anything decent in the plot or thematic premise is eviscerated in the mania.

Clooney’s Frank pairs with a girl named Casey (Britt Robertson). Both characters are less developed than a TV commercial character. They enter what can only be described as a Saturday morning serial or TV cartoon world of robots, explosions and rubbery facial expressions. Without giving away the plot in this 12 and under focused movie, which bears no resemblance to what was once Disneyland’s most exciting place to visit, the future may be lost to those with bad intentions, overpopulation, war and the weather, broadly suggested here as climate change. It’s up to Frank and Casey to end the threat.

But it takes an hour to come to that conflict and it’s flimsy and undefined. Add a strange relationship between Clooney’s character and a little girl with a British accent (Raffey Cassidy) that drains Tomorrowland of the tiniest plot progression, too many characters, terrible acting and childish humor and the film feels overbaked with the wrong ingredients. The screenplay by Disney-owned ABC’s Lost writer and co-creator Damon Lindelof and Bird, from a story by Lindelof, Bird and a magazine TV critic named Jeff Jensen, Tomorrowland has none of Walt Disney’s futurism.

With Hugh Laurie (House) as an evil scientist named Nix, who dresses like Ming the Merciless from Flash Gordon, the girl powered plot’s main problem is its total disregard for the idea of innovation. These inventors and scientists are more like bipolar patients running amok than real, hardworking people of ability excited about solving humanity’s problems. Real inventors are enthusiastic about explaining what they’ve made and why they’ve made it. Not this team. They’re constantly saying “now what?” to one another before flinging themselves mindlessly into the next microsecond-long scene or situation. The music makes the movie feel like a frantic cartoon for tots. So do the broad faces and vocal impressions. No one has the slightest interest in showing how stuff works, let alone how it’s made and why it’s necessary or might be fun to use.

But this is why Walt Disney, referenced in the beginning with a passing homage to his work for the 1964 World’s Fair, including the Carousel of Progress attraction’s musical theme, made Tomorrowland and, in the deepest sense, Disneyland. Here, that visionary impetus has been reduced to Clooney’s character whining: “Do I have to explain everything?!?” Heck, his annoying character doesn’t have the patience to conceive of something much less make it and demonstrate how it works. Walt loved showing how stuff works. No one in this movie plausibly would have the curiosity for new knowledge and reverence for the manmade to look twice at a futurist attraction at Tomorrowland, except possibly Laurie’s villainous character.

That’s a shame because what remains of a theme, which is possibly Bird’s idea, could have been made grand and just when the world needs it most. An overstuffed, overdeveloped movie with battlebots, ecological windmills and a magical tuning fork—none of them explained, explored or interesting—pulls off the impossible and makes Tomorrowland seem shrill, chaotic and downright dull.