Misery loves company in writer and director Martin McDonagh’s Three Billboards Outside Ebbing, Missouri, which is nearly as thematically bleak, Irish and tragic as his similarly themed In Bruges. That everybody hurts, to paraphrase REM’s hit ballad, is not an original premise. As with In Bruges, immersing in the movie’s setting and subculture capably and sufficiently refreshes the premise, however, leading to a sense that something meaningful is about to happen or be resolved. 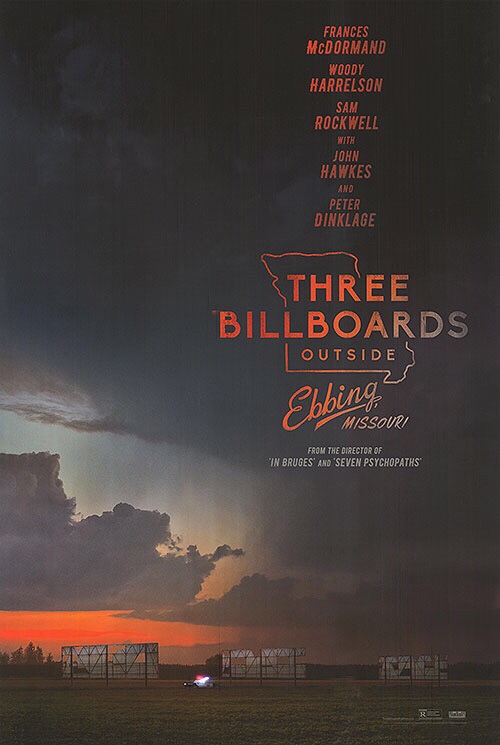 And, as with McDonagh’s violent Euro-fable, this violent movie exists to challenge the audience on moral grounds. It is too obvious, pointed and belabored, though the cast of absurd characters, biting lines and mythical pictures keep the audience guessing and wanting to know more. Cinematically, Three Billboards Outside Ebbing, Missouri is less a whole motion picture than it is a Christian morality play detached from reality; homage to its Southern Gothic-Catholic godmother, Flannery O’Connor.

This doesn’t mean it’s without value, as long as you know its purpose going in. Misty pictures and poetic Irish music introduce a story that’s more about a place than a character. The place is in the middle of the country, a stopover, really, as its wisest character suggests, where you go when you don’t know where else to go. Is this the South? The Midwest? Both? Three Billboards Outside Ebbing, Missouri does not commit. If it commits to anything, it’s a vow not to vow. It’s downright absolutist in its anti-absolutism.

Leading the way in her ridiculously old Ford station wagon is craggy anti-heroine Mildred (Frances McDormand, as hard, blunt and dour as ever, and it’s sort of sad to see the once-upon Miss Pettigrew confined to this type of role). McDormand (The Good Dinosaur) is a fine actress. The performance can’t conceal that the role exists less as a character than as a means to the ending. Mildred’s a spiteful, old soul. On the one hand, she finds peace in nature, turning an insect upright, crying to a deer and never veering from her mission to get cops to investigate her daughter’s rape and murder. On the other hand, Mildred’s oblivious, even negligent, to the fact that she poisons peace, love and life wherever she goes. Mildred is toxic.

The whole town is toxic, from the mean old mother of a bigoted, bad policeman named Dixon (Sam Rockwell, Cowboys & Aliens) to Mildred’s wife-beating ex-husband, the entire police force and a town midget (Peter Dinklage). Even Mildred’s pot-smoking best friend, who seems to have stepped out of another movie, is morally gray, concerning herself strictly with Mildred’s welfare at the expense of her own. The town’s police chief (Woody Harrelson, Wilson) is as inexplicably ineffective as he is inexplicably popular. The point here is that everyone is morally mixed, gray and, down deep inside, inexplicably dark. Like In Bruges, Three Billboards Outside Ebbing, Missouri rationalizes splattering blood because it purports to confer upon us muted rays of hope and light. But nothing in this movie ever feels realistic; it never feels anything but fabled and fictitious.

Stomping around in a blended buzzcut with a snipped off ponytail, Mildred cuts a scowling figure in Ebbing, Missouri, flicking and littering her cigarette butts, accosting children, insulting strangers and doing it with the righteous indignation of a woman wronged. Though the audience eventually learns that there may be more to Mildred’s role in her daughter’s demise than is first apparent, Mildred maintains the moral high ground in a town that doesn’t appear to care about justice, love or life. That it’s all supposed to be hilarious (it isn’t), particularly with the hick cop Dixon as comic foil (who’s as funny as a dying toad), is intended to infuse the elegiac finale.

Amid racism, cancer, attempted murder, suicide and perfectly framed pictures of two characters on two swings overlooking three billboards — with Mildred’s cutely named Southern Charms Gift Store as a kind of weigh station — Three Billboards Outside Ebbing, Missouri curves into a gauzy conclusion, cued by a folk singer wailing about the night they tore old Dixie down. I won’t ruin the ending, which, as quaint as it is, never tears anything down. It doesn’t even rip. Like the movie’s dining table (or the insect) being set back upright after a brawl, Three Billboards Outside Ebbing, Missouri merely provides a fleeting, lyrical reset; more passing observation than examination, trucking right through the middle without letting off its load.