With several credited writers, campy Cate Blanchett (Carol, Truth, Cinderella) in smeared black eyeshadow, full gothic gear and Maleficent-like antlers to match, butch lesbian warriors, scads of Marvel Comics characters and tie-ins, cameos and one gigantic Phallic symbol — even Jesus Christ and Moses if you know where to look — Thor: Ragnarok runs more than a bit amok. Pardon the kitchen sink analogy, but this Disney movie, directed by Taika Waititi (Hunt for the Wilderpeople), is almost a full-blown camp comedy, with action and a high body count. 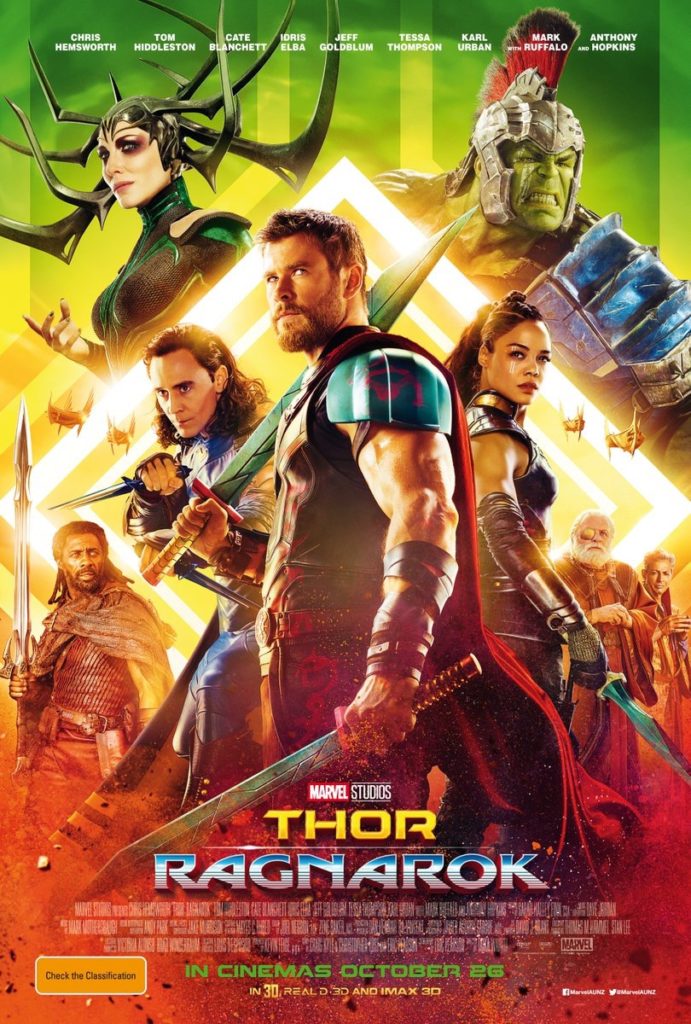 With Chris Hemsworth (Thor, Snow White and the Huntsman) returning in the title role, Thor: Ragnarok starts flaming early on, with flying embers coming over the opening credits to Thor’s heavy metal musical theme. The Norse god of thunder narrates his own situation. Ragnarok is quickly explained (think the Rapture) and the movie’s off on its wild runs. Light, silly and depleted of the original Thor movie‘s mythology and sense of honor, in comes brother Loki (Tom Hiddleston, Thor, I Saw the Light, Kong: Skull Island) and their dad Odin (Anthony Hopkins) and a first-born child, Hela, played by Blanchett as a veiny goddess of death with black hair, black eyeliner and black bodysuit like she stepped out of an X-Men movie.

“This you must face alone”, Odin tells his son Thor about the new dilemma of the long-lost sister’s return to their mythical world. With shades of Terminator, Mad Max and Willy Wonka films, complete with a glitzier version of Thunderdome, the action comes in spurts while the comedy keeps the lines coming in crisp flamboyance. Blanchett’s Hela sashays around swinging her hips and dripping her lines such as: “You don’t know who I am?”

But Thor: Ragnarok, with Hemsworth gamely and amazingly staying in character the whole time, has more glitz and schmaltz in store with another planet’s grandmaster in gold lamé played by Jeff Goldblum (Jurassic Park) in a gray-haired pompadour with blue fingernail polish and face paint. Idris Elba (Star Trek Beyond, Zootopia, The Jungle Book) returns in the same role. Karl Urban (Pete’s Dragon, Bones in Star Trek Beyond), Tessa Thompson (Selma, Creed) and Mark Ruffalo (Hulk, Spotlight) are fine and look for an appearance by the director and, of course, Marvel and Thor creator Stan Lee. It’s all in good fun and games and the film feels and looks like a gaming play, complete with heavy use of automatic weapons and artificial scenes.

For instance, Hulk changes proportion. Hela is inexplicably regenerative while Thor is not. Others will probably notice an array of tricks, Avengers series nods and gimmicks, though it borders on exhausting and I opted to see Thor: Ragnarok in a two dimensional screening, not in 3D. Eye strain and fatigue may creep in but thematically interesting resistance, extermination and something called “obedience disks” gives the ensemble-driven, meandering plot a second wind. At root, Thor: Ragnarok is a comedy with action, not the other way around, though it is too long and I could have done without the Hulk and his subplot. Hemsworth’s Thor gets the best quip when he puts Bruce Banner in a bind to go somewhere else and says: “Use one of your Ph.Ds”. Fans of the original will want more of Thor’s mythology.