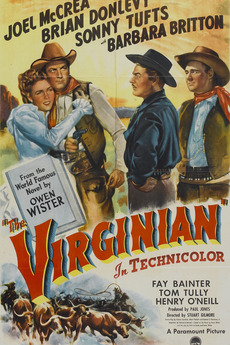 Almost any movie starring Joel McCrea (1905-1990), who’s known for his Westerns as well as leading roles in Alfred Hitchcock’s Foreign Correspondent, Cecil B. DeMille’s Union Pacific, George Stevens’ The More the Merrier, Preston Sturges’ The Palm Beach Story and Sullivan’s Travels, is worth seeing just for him.

As host Robert Nott explained before a recent screening of The Virginian (1946) at The Autry Museum of the American West in LA’s Griffith Park, Southern Californian McCrea carried an easygoing way about him; he was a true gentleman and horseman—a rancher, not merely a movie star, as he informed the IRS when they came after him (and lost, by the way)—and he was a proud Western rancher. Nott says his family still runs one of the original ranches in New Mexico. McCrea, Nott asserted, captures “Americanism, realism and romanticism.”

Yes, indeed, he does, in all of those movies and especially in The Virginian, not to be confused with other fine versions and the later TV adaptation. It’s a fine story, based on the Western novel by Owen Wister, about an individualist in the West. McCrea plays the title character, which is what he goes by in a Wyoming town that’s on the cusp of civilization but still in the Wild West. In from the East comes a feisty schoolteacher (fetching Barbara Britton) to bring the growing town into the modern age and, predictably, her presence puts the whole town off on opposing sides of law and order. In this way, The Virginian is deft and raucous at once, letting the joy of courting the pretty new woman in town test each man’s character and bring his true nature to the fore.

Three men represent the good, the bad and the mixed and this is what powers the movie. Sinister Trampas (Brian Donlevy) is the standard Black Bart type, a scoundrel from the outset who’s as intent on stealing cattle as he is in first trying to steal the teacher at the saloon. He’s a rat, to be sure, and a coward when it comes to backing up what he’s done. Donlevy nails the type with the right amount of slime. The man in the middle of the road, Steve (well played by Sonny Tufts) provides the moral of the film. Steve’s the jolly fellow who goes along with the Virginian without much thought, a true ‘pardner’ to a point and a cheerful rival for the pretty teacher’s affections.

Steve’s all smiles throughout the boiling of the coming conflict between Trampas and the Virginian, who expertly rides a horse, thinks in advance and sweeps the lady off her feet, which upsets her uppity Eastern sensibilities. But Steve’s good time cattle rustling with the Virginian ends when Trampas raises the stakes and, in a line about the West that applies today as much as ever, “times are changin’ and a man’s got to figure out who he’s lined up with.” What happens next is heartbreaking, particularly for the benign but uncompromising Virginian, whom someone says “takes life too serious.”

This the Virginian does, which is why he is the movie’s hero, taking account of the townspeople, the conflict and the lady and factoring what’s likely and what’s right by reason and setting the town on the right track by his best effort. Strong and handsome Joel McCrea shines in the role and this picture displays why he is one of the screen’s greatest stars. His Virginian rides fast and endures the results of his mistakes with grit. He winces when there’s pain and strives to understand the new West but he is supremely self-confident when he acts, including when he takes Britton’s fresh-faced sophisticate, who is too much the conformist to deserve him, into a dazzling dance.

Look for I Love Lucy‘s William Frawley as a crusty cowhand. Fay Bainter steals every scene with crisp, true lines as the teacher’s hostess and would-be mentor; some of the film’s best moments come when she instructs the dainty Easterner in what being a Western woman means in practice and principle and puts Britton’s silly objections in perspective. The Virginian was adapted by Howard Estabrook from Wister’s novel and stage play by Kirk La Shelle and Wister and written by writers Frances Goodrich and Albert Hackett, directed by Stuart Gilmore and produced by Paul Jones for Paramount.