The Snowman begins with a gripping, horrific setup. From there, the visually alluring movie piles on clues, suspense and gruesome implications. Much of what comes is implausible, particularly policemen and policewomen going it alone when they wouldn’t and/or shouldn’t, like horror movie protagonists stepping into darkness without calling for help. A good cast and stunning photography can’t save this grisly mystery from being too cryptic. 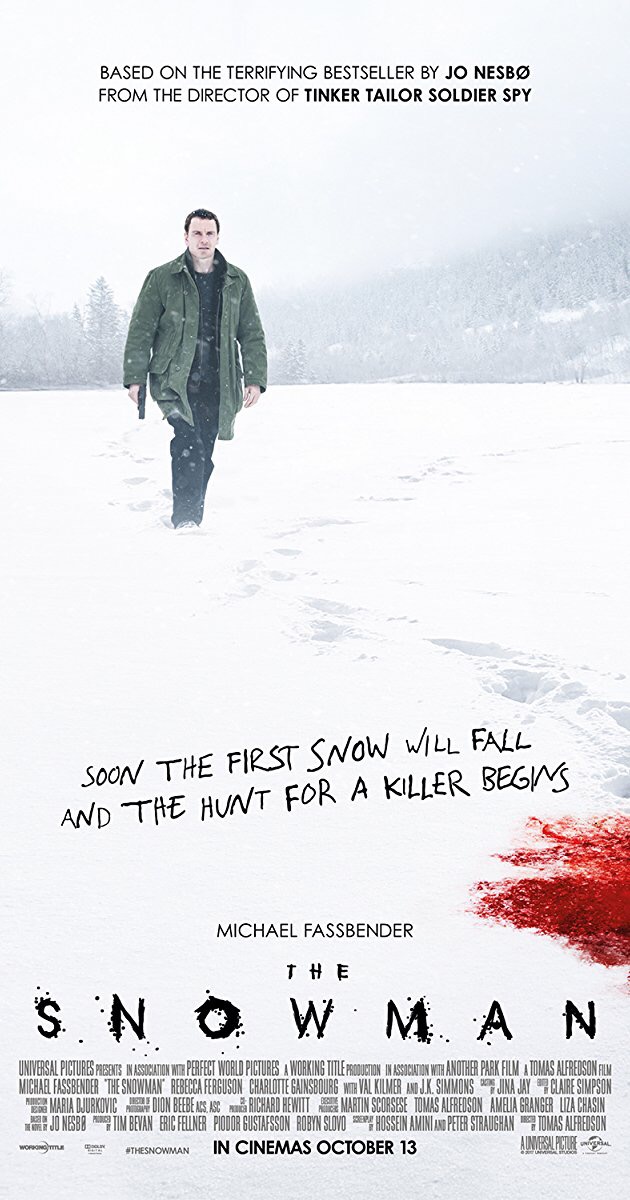 The hyponotic appeal of snow, distinctive patterns, importance of imprints, music and raising a brighter child are on vivid suggestion or display, each with a sense of purpose, throughout this dark serial killer tale, lead by Michael Fassbender (Macbeth, The Light Between Oceans, 12 Years a Slave, Steve Jobs), which in certain respects resembles Se7en (1995). The outstanding actor Fassbender plays an alcoholic cop in Oslo, Norway named Harry Hole (this is the character’s name, underscoring his sense of damage and misfortune). Hole is preceded by nine years in detective case work by Val Kilmer as a more expressive alcoholic cop. Their investigations pertain to the spree that spawns from that setup piece, which is striking, bizarre and detailed enough to spin the film’s puzzler: who is beheading fertile Norwegian women?

You get the why before you get a chance to put the pieces together to figure out whodunit. The Snowman is eerily, frighteningly coherent, not convoluted. Aided by straight, unscored scenes with cigarettes, snowballs and triggers and hints, it stays on a general track. Besides Kilmer, who’s always interesting to watch onscreen, and Fassbender, the able and ample cast includes Toby Jones (Captain America), Charlotte Gainsbourg as Fassbender’s ex, J.K. Simmons (La La Land, Whiplash) and a very natural and absorbing actress named Rebecca Ferguson (The Girl on the Train, Florence Foster Jenkins) as Fassbender’s young partner in solving the missing persons cases. Ferguson’s Katrine, the most sympathetic character, is given too little to do and her departure is distracting and unsatisfying.

Astute cinematography by Dion Beebe, who photographed Into the Woods, Memoirs of a Geisha and Chicago, makes the bluish-white The Snowman an eye-popping and mesmerizing motion picture. If only director Tomas Alfredson (2011’s Tinker, Tailor, Soldier, Spy) had held the screenwriters, adapting The Snowman from the bestselling novel, to the same standard. The camera glides over Scandinavia’s swirling snowdrifts and winding rails and roads and you want to indulge and let yourself get drawn deeper into the icy murder mystery, which recalls The Girl with the Dragon Tattoo. But The Snowman‘s failures, gaps and stretches inhibit any indulgence.

Crime-themed films are generally both horror-driven and unceasingly abstruse. Alfredson deftly avoids horror, while neatly laying out the killer’s disturbing motives and expressing the movie’s redemptive theme. The Snowman‘s plot ought to have matched its pictures’ wondrous precision.