Movie Review: The Shape of Water

The Shape of Water by director Guillermo del Toro (Hellboy, Crimson Peak, Pan’s Labyrinth) stylizes horror, mixes it with romance and comedy and wraps it with anti-Americanism. For all the visual flourishes, fancy trappings and stylization, however, Fox Searchlight’s film is distinctly repetitive, dull and predictable. This amounts to a lavish diatribe against America, humanity and life. 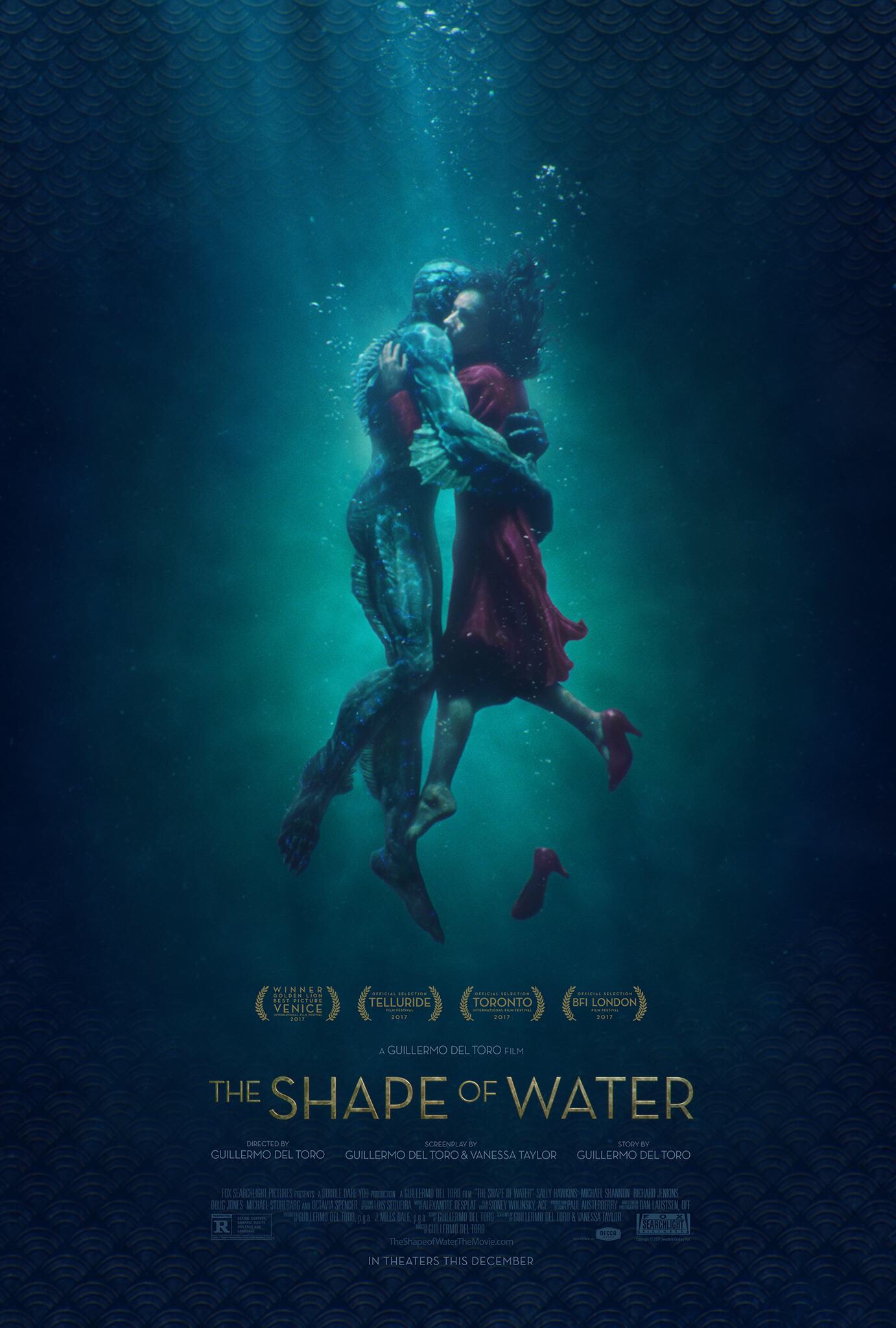 The highly praised Del Toro’s as gory, lush and death-obsessed as ever and his hybrid of a sequel to and remake of the Fifties’ B-movie horror classic Creature from the Black Lagoon knits too many sections and themes and comes up dry. In another fine performance, this time as a villain, for a change, Michael Shannon (Midnight Special, Mud, Take Shelter) is the heavy-handed movie’s only major conflict, portraying a racist, sexist boor who reels in a gill-man from an Amazonian river in 1962 and proceeds to torture, taunt and house the water-man or fish-man (Shape never explains what it is). With so many reasons to hate this monster, the blatant metaphor Shape keeps hitting the audience with, you almost want to look deeper for what motivates Shannon’s evil Mad Men-type, a white male sexual predator in case you miss that he’s evil. But The Shape of Water keeps characters plain, simple and obvious. Like Call Me By Your Name and Moonlight, sensory immersion trumps character, plot and theme.

Shannon’s skill, gorgeous photography, production design and Alexandre Desplat‘s ethereal musical score are almost enough to divert attention from the fact that this slow-moving episode hasn’t much to say or show other than that ignorance is bliss, men are monsters and America was never great, let alone the greatest. Sally Hawkins (Godzilla) plays a mysterious facility’s custodian, Eliza Esposito, an absent-minded woman with a disability who falls in love with the gill-man for no apparent reason, except that she’s terribly lonely. This piece of condescending character development, is, if you think about it, ignorant in its own way.

The mute woman lives alone above a grand Baltimore movie palace in an equally grand apartment next door to her best friend, an unemployed artist who’s homosexual (Richard Jenkins, trying not to be a stereotype with some success). That a cleaning woman or an out-of-work painter can afford such a pad in 1962 tips that this is an absurdist or surrealistic story, pure fantasy, further established by the fact that the custodian’s such an other-worldly person as to barely be functional. She chronically shows up late for work, at other workers’ expense, hardly does her job and listens to co-worker and pal Zelda (Octavia Spencer, Gifted, Black or White, Hidden Figures) kvetch about her husband. All you know about this plain woman is that she masturbates, rides the bus and feels separate from the rest of the world. Yet she never really makes an attempt to connect or align with it.

And she was orphaned and left by the river as a child, one of several water signs that run incessantly throughout The Shape of Water. If there were some sense of how the janitor Esposito ended up as kind and non-compliant, this film might have been more involving. Doug Jones as the creature is mostly a computer-generated, performance captured role, without the technical touches of, say, Rise of the Planet of the Apes, so fish-man is confined to reactions, instincts and urges.

This appears to be central to The Shape of Water‘s point that humans are ultimately most human in the silence of dreams and underwater, the sort of detachment from this world, un-reality or anti-reality that Del Toro depicts as a matter of course. Sure, he includes a clip of Shirley Temple tap dancing with Bill Robinson, puts on old records for romance and makes sure that the silent, lonely woman is surrounded by nice things in her home. But The Shape of Water, like Steven Spielberg’s Jaws, always comes back to blood, water and body parts. It exists to horrify.

What’s intended to pull this horror off is the straight, white, American male villain, the most hackneyed, predictable Hollywood villain besides the businessman, minus the mustache-twirling. The character’s a stand-in for the vulgar, uncouth president. Shannon’s villain even uses the word pussy.

The character that comes closest to meeting that description who isn’t undignified or malignant is a devoted Soviet spy (Michael Stuhlbarg, Call Me By Your Name). Depicting Soviet Russians as capable of humanism is certainly one way to acknowledge the centenary of the bloodiest dictatorship on earth.

Besides the creature, The Shape of Water‘s angelic character is Hawkins’ lonely, lustful custodian, who tempts the gill-man Eve-like with an egg, fantasizing before teaching him sign language, Benny Goodman and sex (again, without regard for others). The Shape of Water is a polished jumble of themes and genres which deliberately never takes, let alone holds, a shape.