Movie Review: The Nutcracker and the Four Realms

Any movie directed by two of Hollywood’s most able directors, Lasse Hallstrom (The Hundred-Foot Journey, Casanova, An Unfinished Life, Chocolat, A Dog’s Purpose) and Joe Johnston (Captain America, Jumanji, The Wolfman), is bound to be good, right? Disney’s The Nutcracker and the Four Realms, based on the famous Christmas ballet, isn’t a bad movie at all. Parts of it are wonderfully isolated and restrained. Parts of it are breathtaking and beautiful. Johnston’s arresting visuals and Hallstrom’s gilded storytelling and sense of musical-pictorial grace seamlessly blend at times into a magical movie.

And a movie which begins with a reference to Isaac Newton’s third law of physics promises to be distinctive. With Keira Knightley (Collateral Beauty, a magical Christmas movie in itself) looking like Faye Dunaway and evoking Marilyn Monroe as the Sugar Plum Fairy, The Nutcracker adds an eccentric streak. Indeed, this 90-minute movie tucks in everything from a theme to “trust yourself”, a leading girl (Mackenzie Foy, Interstellar) who’s a budding mechanical engineer, men wearing makeup and Morgan Freeman (Feast of Love) as an eye-patched wise man.

All that and more is stuffed into yet another Disney picture in which the mother has died. Stuffing these parts into the movie somehow puts this otherwise enchanting film into the category of overproduced fantasy (though not nearly as dull as John Carter, The Golden Compass or those godawful Narnia films). The Nutcracker is predictable and strangely chaste. For example, the girl, when she enters this other world at a Christmas party, meets a handsome captain (Jayden Fowora-Knight). Their relationship, which serves as a major plot point, curiously goes flat.

As a story partly depicted in ballet, which comes about in The Nutcracker‘s most striking visual scenes, the storybook style can be both inviting and marvelous. Early scenes of the girl in the new fantasy land depict long, magnificent icicles in a Christmas tree forest where the mystery of a gift from the girl’s late mother deepens and is stolen away. If you know The Nutcracker ballet, and it’s hard to imagine that there’s anyone left who’s never been exposed to this classic score, characters and tale in some way, you know the characters and essential story. 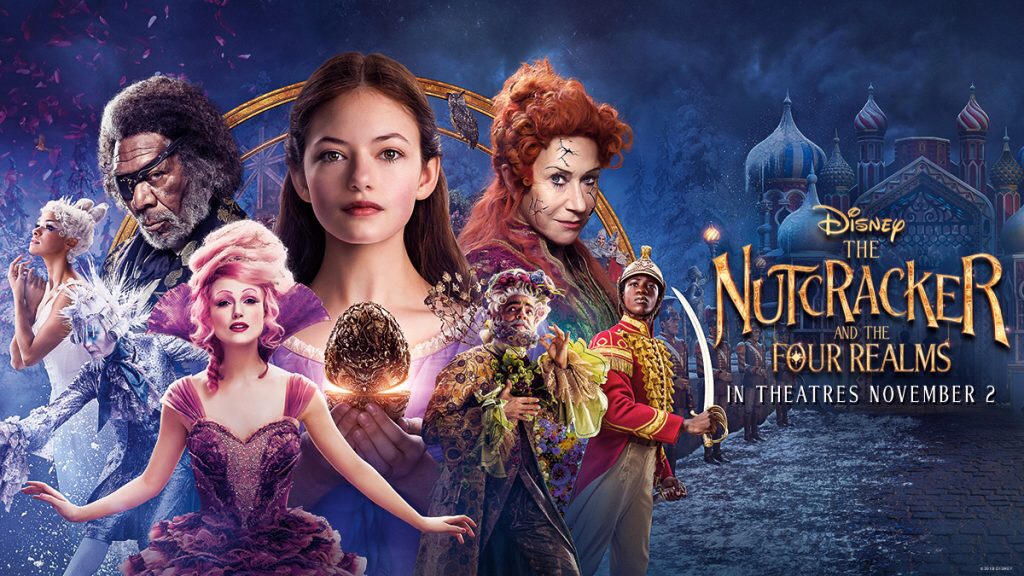 But screenwriter Ashleigh Powell adds an engine, mice attacks, battle scenes, and the grieving father (Matthew Macfadyen). There’s frankly too much of everything and not enough character development for the girl, who climbs rocks in a skirt and never gets the depth to seem anything but distant, detached and really intelligent. The kitchen sink quality creeps in, making the climax and resolution less effective.

“Discipline, order, control” prominently turn out to be the cues for The Nutcracker‘s child-friendly warning against authoritarianism. But the public service announcement-like sensibility in which the STEM-ready girl’s intelligence is sewn into The Nutcracker and the Four Realms undercuts the sense that she’s really present and invested in solving the puzzle. It’s not that Foy makes the girl’s voyage look too easy. The problem is that she looks too often like she doesn’t learn or gain life-changing insights, as Alice purposefully does in Alice in Wonderland or breathless Dorothy does when going home in The Wizard of Oz. There’s music and a mirror but this girl seems to be biding her time.

Still, you get to see Helen Mirren (The Hundred-Foot Journey, White Nights, Collateral Beauty, The Queen, Hitchcock) brandishing a whip amid parts of a beloved ballet remade with the stylized panache of two masterful filmmakers.