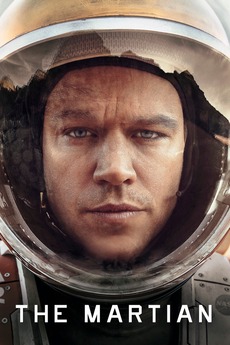 Director Ridley Scott’s science fiction saga, The Martian, cleverly plays off the modern media culture. The story of an astronaut (Matt Damon, Hereafter) stranded on Mars begins with a band of spaceship Westerners, apparently at some point in the near future, bantering back and forth up through and until a literal storm warning. That hook quickly leads to the emergency departure of the space vessel, Hermes, which is the name of a Greek god who was messenger for the gods to mortals.

The Martian, based on the book by Andy Weir and adapted for the screen by Drew Goddard, delivers Ridley Scott’s mythological message.

It’s very purposeful, at times gripping, and it is probably unlike what most of today’s audiences have seen and come to expect from a movie set in outer space. Also, The Martian, which is strangely and invitingly both telescopic and episodic, shuttles between Earth and Mars, leaving space and its wonders largely off screen. The Martian is more intimate like Silent Running (1972) than it is like the recent and overrated Gravity. The scale, orientation and theme is utterly human. Damon’s astronaut, Mark, is the lone human left on another planet.

Whether and how he adapts and survives becomes the agonizing and, to some in the audience and probably by the filmmakers’ intention, humorous point of the tale and focus of the film. Mark begins his solitude by treating, medicating and healing himself. He hates disco music. He uses humor to cope. He imitates a popular TV character. In other words, Mark is an everyman. To prove it, Mark swears, gets cocky and makes mistakes. Mark is also a botanist, and he is resourceful, so maybe he stands a chance. With Mark as the main character, the audience bears witness as he becomes the Martian. What becomes of Mark—what becomes of the lost individual—is up to him. Should he ever make it off of Mars, it is equally up to everyone else.

This idea of interdependence is at the core of The Martian. Ridley Scott (Alien, Blade Runner, Gladiator, Robin Hood, Prometheus) reinforces the plot with this prospective interdependence and harmoniousness many times. It may be cloaked in other themes, such as man’s ability to think, reason and choose as the key to his survival, but man as a social being who must live, and learn to live, among others is the movie’s theme. This is fine to the degree it is true, and Mr. Scott does not mitigate the role of the superior individual in his own advancement and in the march of human progress. Again and again, the individual stands up to make an original thought, comment or action that leads to finding a new path. In this sense, the spirit of discovery is very much infused here. Damon’s Mark makes a valiant effort to stay alive and not out of duty; he wants to live, even if only to say “in your face, Neil Armstrong” in one of the more unfortunate lines.

On the way to this potential convergence of Mark’s impossible plight and the many others upon whom his life depends, The Martian itself feels derivative of other pictures and dependent upon audience predispositions to other movies based on today’s culture. This makes The Martian feel generic over the two hour, 20-minute haul. The banter among the Hermes astronauts, led by the ship’s commander (Jessica Chastain) and including crew played by Kate Mara (Brokeback Mountain) and Michael Pena (Ant-Man), chugs right along. Jeff Daniels (Pleasantville, Looper, TV’s The Newsroom) as the NASA chief, Chiwetel Ejiofor (12 Years a Slave) as the mission lead and Sean Bean (Troy, TV’s Game of Thrones) as head of flight operations, lead the team from crisis to crisis at conflicting purposes as various characters play their parts in the plan. Arcing upward toward some sort of twist and conclusion, The Martian is more than a bit too Hollywood.

That plot points chart the theme too neatly might make one overlook finer moments, such as a handwritten note at the last minute and a sudden desire to become more civilized in anticipation of communion, which felt like two of the most honest scenes in the picture. If The Martian oversimplifies the mechanics of an enormous mobilization of America’s military-space complex and underdramatizes the rest of humanity—and it does—it also accounts for the science, technology and dynamics of the mission, despite the Apollo 13-like cross-your-fingers quality and nods to religion. Audiences may notice the role of rebellion, too, in pursuing such noble ends in The Martian. There is much to feel good about in what might be called Ridley Scott’s hymn to humanity, a sort of anti-Alien, and Chastain, Mara, Ejiofor and Bean give especially good performances.

Everything in this problem-solving movie serves the climactic conflict resolution and nothing in The Martian feels perfunctory, even when it’s as generic as Matt Damon’s character. Scenes just before and during the end credits drive the mythological message home and, though The Martian is both too contrived and too contingent upon an opposite response to today’s pervasive sense of dread, it is also an experience that, in a world lacking in optimism, may be too good to pass up.