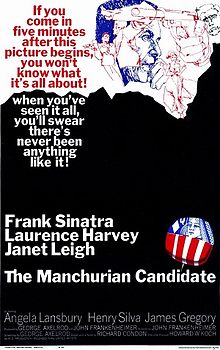 Controlled by Frank Sinatra, directed by John Frankenheimer, adapted by George Axelrod from Richard Condon’s 1959 novel of the same name, shot in black and white and released before President Kennedy‘s 1963 assassination, 1962’s The Manchurian Candidate‘s reputation is probably better than the movie deserves.

Yet as a piece of cinematic paranoia, the assassination-themed picture strangely and certainly applies to its time and continues to be relevant as a kind of warning against a subversive foreign takeover for dictatorship of the United States of America.

The story begins in North Korea. The year is 1952. Sound and image converge with whirling helicopters and the American motto in Latin, E Pluribus Unum (“out of many, one”) and quickly, clearly, the audience sees that something is terribly wrong with the world in the picture. Indeed, pictures of mass murdering Communists Mao Tse-Tung and Josef Stalin appear with U.S. Army soldiers intermixed with scenes from a ladies’ gardening club. Thus the notion of Americans being brainwashed—”a new American term”, according to one of the Communist perpetrators—sets the movie’s plot, characters and action into play.

The Manchurian Candidate lingers in this unsettling Communist torture chamber, interspersed with the garden club from the soldiers’ warped perspectives, depicting an act that captures the horrifying potential and power of the operation. Besides signalling the diabolical plot to come, this setup allows Frankenheimer to indulge the movie in a particular brand of paranoia that indicts the entire country because, as will become evident, the culprit in this conspiracy theory in action is really the American people.

From Sinatra’s Army Major Marco, who blindly salutes early in the film, the U.S. Army, politicians and the media to a black Army corporal (James Edwards), principled U.S. senator (John McGiver) and the senator’s daughter (Leslie Parrish), everyone is either plagued or near powerless to conjure, question or stop the scheme to turn the nation into a Communist puppet state. In this sense, the movie’s rather bleak, heavy and empty.

Every character is flawed, damaged or out to end America. No one is entirely sympathetic. There are no heroes here.

The person most contaminated by the enemy is also the person most likely to co-opt an unhappy ending, presumed Korean War hero Raymond Shaw (Laurence Harvey, BUtterfield 8), who was programmed by the Reds to do the dirty deed. Some might claim that Sinatra’s Marco also acts admirably and heroically and he does, to a certain extent, though he, too, is ultimately powerless. Marco is the film’s detective, having vague, nagging nightmares about captivity, doubting the unit’s blind allegiance to the war hero Raymond Shaw and discovering what triggers the secret agent’s sinister acts.

Major Marco has to contend with a love interest (Janet Leigh, Psycho), whom some see as an innocent loner on the train and I see as an apparently unresolved possible Communist agent, or at least a character that could go either way. Any woman so quick to ditch her fiance for Sinatra’s disoriented Army major—and with such practiced recitation of her address and number—is suspect in this movie.

Powerlessness and paranoia are The Manchurian Candidate‘s themes—Americans are both helpless to combat evil and too paranoid to identify what evil must be stopped—and certainly the Korean War, the first of many American post-World War 2 wars to neither be acknowledged as war and declared nor won, is the perfect backdrop for a seamless, insidious spread of totalitarianism in our midst. This spread emanates from recognizably monstrous Soviet, Red Chinese and North Korean agents, such as houseboy Chunjin (Henry Silva) and an evil doctor (Khigh Dhiegh, who went on to play the Communist-friendly Wo Fat villain in Hawaii Five-O), with the doctor pronouncing the movie’s moral theme with glee, calling out what he refers to as the “uniquely American symptoms [unearned] guilt and [irrational] fear”. By now everyone knows that the real source of the Communist threat in America is dim-witted anti-Communist Sen. Johnny Iselin (James Gregory), apparently patterned after Republican Wisconsin Sen. Joseph McCarthy, propped up by his nagging wife, Eleanor Iselin (Angela Lansbury), war hero Raymond Shaw’s mother, a role originally intended for Lucille Ball.

Much has been made of Iselin’s resemblance to McCarthy and it’s a legitimate point. But McCarthy’s flaws never included collaborating with the enemy and his basic theory that Communists had infiltrated the highest levels of state and industry was proven true. So, while The Manchurian Candidate delivers on the left’s bogeyman, McCarthy, it also validates the right’s more salient contention that American ignorance, evasion and appeasement of Communists all but opened the door wide open to a Communist plot to take over the country; Sen. Iselin’s character merely projects what’s actually happening on the film’s terms.

In skewed angles, in black and white, with an incestuous psychological underpinning that forecasts the rise of both the shrill, domineering female and the authoritarian who’s a “clown and buffoon”, with decent soldiers and statesmen taken in by the Reds, always one step behind and never acting to defend the republic in time, The Manchurian Candidate spirals to a tense, exciting conclusion.

By the time end credits roll, the good has been breached beyond repair and one medal of honor may yet be earned. All of this sounds more important than it is in the movie’s context strictly due to what tragedies, wars and despair coincided with this October 1962 United Artists release, which screened during the TCM Classic Film Festival 2016 at Grauman’s Chinese Theater (see notes below) with co-star Angela Lansbury. This is because the movie never fully identifies or names, let alone resolves, its cryptic conflict of an American republic gone bad or struck dumb, really dim, through neglect or brainwashing. The cast is excellent, so far as the characters allow, and the creepy feeling pervades.

And, while this may never have been Condon’s or anyone else’s original purpose, the 50 years since The Manchurian Candidate (don’t bother with the awful anti-capitalist remake in 2004) was made only affirm that the worst of this movie’s outcomes is coming true. As one character threatens in the movie’s most prophetic line, eerily happening here and now with the rise to power of Donald Trump: “[It’s easy to] rally a nation of TV viewers into hysteria that will make martial law seem like anarchy.”

At an exclusive, pre-screening Hollywood interview sponsored by Turner Classic Movies for its TCM Classic Film Festival 2016 at Grauman’s Chinese Theater on Hollywood Boulevard, the actress who plays Raymond Shaw’s mother, Mrs. Johnny Iselin, Angela Lansbury (Gaslight, Sweeney Todd, Murder, She Wrote, All Fall Down, Bedknobs and Broomsticks, Shootdown, Beauty and the Beast, The Picture of Dorian Gray) in The Manchurian Candidate talked about the movie, her life and career. 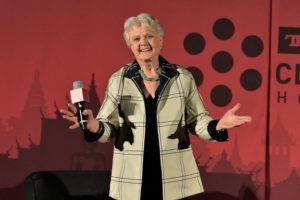 In a conversation with Alec Baldwin for TCM, Ms. Lansbury, who glided out into the sold out theater looking tall, sensible and grand, started by saying that she’d read Richard Condon’s novel, which she described as “very serious” in preparation for the shocking role of the incestuously villainous mother of the Manchurian candidate’s would-be assassin. Declining to take full credit for the Oscar-nominated performance, Angela Lansbury added that she thinks the writer gives the character its essential meaning. Hosts and moderators often fawn over the movie or performance that’s about to be shown and this showing of The Manchurian Candidate was no exception. However, to her credit, 91-year-old Angela Lansbury refused to go along; when Baldwin prompted her for a moment of eternal and overdone praise for the film, she correctly pegged the movie as “a unique piece of work.” Thanks to her chilling performance, it is.

Speaking of her movie career, which included roles in The Harvey Girls with Judy Garland, Frank Capra’s State of the Union with Tracy and Hepburn and Cecil B. DeMille’s Samson and Delilah, she sounded somewhat embittered when she lamented that “directors all saw me in a different way” and kept casting her as various types of characters in pictures, which grew tiresome, so she stopped making as many movies and went to work on stage in productions such as Sweeney Todd and on television as mystery writer Jessica Fletcher in the CBS hit Murder, She Wrote (1984-1996).