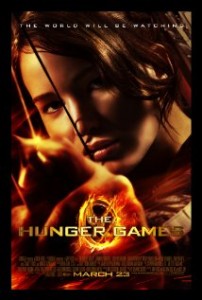 In mythology, Diana was a huntress who set upon the woods and wild animals with bow and arrows, precision in her aim and a natural desire to protect youth and life and, essentially, The Hunger Games, based on the fiction series by Suzanne Collins, is a version of her story. It isn’t fast and flashy like most of what we consume in today’s similarly-oriented movies. It is slow and subtle. As a dramatization of the individual against the state, it is a work of art.

Reverence for life is her religion. Set in a dystopian future where the omnipotent state selects a boy and girl from 12 districts to fight to the death on live television, Katniss Everdeen (Jennifer Lawrence), who has stepped in where her mother has failed and vowed to protect her sister, volunteers to take her younger sibling’s place for the 74th annual Hunger Games. They live in a world like We the Living of total government control (and it’s interesting that that story’s Communist regime lasted 74 years). Their mother is weary and has given up. The young sister is a hero-worshipper. Katniss, like the cat that hisses as the movie begins, is the only one who acts as if she knows she’s living in a dictatorship, except for her mate Gale (Liam Hemsworth) who is strong and gentle and wise and senses when she’s about to scratch somebody’s eyes out.

Anyone is bound to feel like that in this repulsive slave society where everything is ruled by the state. Ross deftly illustrates the insidious effect of totalitarianism on one’s spirit in the faces, the use of force and fences. When one character wonders what his life would be like if he weren’t enslaved – he doesn’t put it that way – I could feel the war-weary, economically depressed, government-controlled audience responding, relating and rooting for something good to happen. The picture depicts a dark, depressing mood and world not unlike our own. You feel the heavy weight of government control in every scene, from the propaganda film preaching brotherhood and sacrifice to total absence of music, lightness and joy. People live in total fear of the state and it shows. Watching citizens in The Hunger Games is like looking at faces in line at the TSA. People are beaten, defeated, dead. Ruled by the state.

Not Katniss. She is presented as an individual, not merely as a girl, clearly depicted as a certain type of individual – one with a heroic spirit – she gets angry. She does not submit, she tends to defy. She holds on and does not let go of hate and she hates. At the beginning, she knows it’s wrong that they’re all slaves. She hasn’t figured out how to play, let alone win, the game. But she’s working on it. She’s the something good. That she is a girl does not go unnoticed by the baker’s son Peeta (Josh Hutcherson) whose name is also called for the death contest. He is strong, sensitive and kind and knows his limits; he provides the film’s mystery, since we probably have figured out certain outcomes given the hype surrounding the movie, and it’s his story one should watch more closely for clues about the contaminating power of totalitarianism.

It is an infection, a theme which permeates The Hunger Games, from its bizarre bureaucrats (Stanley Tucci, Elizabeth Banks, Toby Jones) to its three young lives – Peeta, Gale and Katniss – who bravely struggle to be true to themselves with the only power they have left: free will. The government that controls the Hunger Games sacrifices its youths while slowly draining the life out of them and it does so to pacify the population, which is hungry for the sight of a brighter future. So, the film has an advanced understanding of what it means to control people’s lives and it is impossible not to notice that those for whom this series is an obsession are like the masses in the movie; they are passive, compliant spectators who subtly, unmistakably and unconsciously sanction and support the meaning of the state’s monstrous Hunger Games. You notice this during the movie. That is an achievement.

It’s not flawless. Amid the toneless sense of dread as 24 kids kill each other one by one, there are raised questions – didn’t these kids ever watch previous Games? – and consistency issues and the state’s technology is more incredible than it would be after 74 years. But there are real, deep and serious issues played out here. While The Hunger Games is certainly derivative of stories such as “The Most Dangerous Game” by Richard Connell and “The Lottery” by Shirley Jackson, it carefully dramatizes nihilism in today’s culture, including our worship of the asinine – stupid TV shows about sluts and freaks – while our government gains power and sacrifices youths in endless wars about nothing as we watch shows and games about nothing.

Katniss knows that she is alone in the world. She is acutely aware in each action she takes, whether kissing a boy or drawing her bow, that she is on her own and that it is up to her to stand up and defy the state to serve her values and live on her terms. Watching her take aim at the core of the omnipotent state when no one else will – with a climax that captures the unconquerable human spirit – is an amazing and searing dramatic accomplishment. At the end – by being true to herself – she may be less alone than she thinks. The Hunger Games, which is too clever and subtle for its own good, is part of a rich history in dystopian-themed filmmaking about the classic theme of the individual against the government – 1984, V for Vendetta, The Mortal Storm, Agora, Doctor Zhivago, The Lives of Others, Sophie Scholl, We the Living (all of which should be seen, especially now) – and it earns a place with every sound of the death cannon that hits you hard and makes you feel hollow below your chest. As any story against government control should.