The primary problem with the otherwise innocuous, enjoyable star vehicle The Good Liar co-starring Ian McKellen and Helen Mirren is not its main plot twist, which is abrupt and abrasive. The basic flaw in this slick thriller, based on a novel by Nicholas Searle, is that the twist entails a bait and switch. This is not merely in manner and tone. I’ll give a hint as to why the bait and switch breaches reality without spoiling the switch or twist. 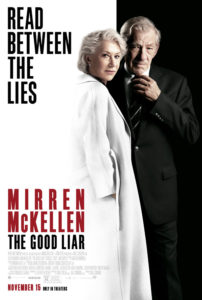 A light, jaunty online dating interplay between woman and man (Mirren and McKellen) opens the movie. The exchange occurs to Carter Burwell’s chipper music. The cute and clever messages during opening titles match sounds of typewriter keys as the leads drink, smoke and lie to one another about their habits, facts and lives.

So, The Good Liar opens as a romantic comedy. You think you’re in for a treat by two arch, accomplished actors who are at their best in dry, British roles. Of course, McKellen’s movie career gained steam when he starred in director Bill Condon’s Gods and Monsters. Mirren often makes an impression whether as the queen of England, Jon Voight’s ex-wife or Ayn Rand, though her best performances remain in supporting roles, such as the actress in Collateral Beauty or the Communist in her husband Taylor Hackford’s thrilling White Nights.

The fun powers the first half of The Good Liar, which is written by Jeffrey Hatcher, who wrote screenplays for McKellen as Mr. Holmes, which is awful, and for director Lasse Hallstrom’s Casanova, which is delightful. That movie retained its lightness while building suspense and weaving a sense of ominous threat without killing the joy.

The Good Liar does not.

Both characters, McKellen’s white collar con man and Mirren’s suburban London grandmother, are obviously hiding something. Their facial expressions, clever interplay and deliberate movements build audience interest with tantalizing anticipation; you know that lives will change and plot points will pivot and, with these two playing each other, it’s enjoyable. As soon as there’s mention of a Nazi, followed by another mention of Spandau in Germany, and certain, singularly gruesome acts, it’s clear that something more sinister is coming.

In cat and mouse contests in Mirren’s kitchen, McKellen’s boardroom and on walks outside London’s shops and boutiques, webs of deception spin, tremble and take form, catching a number of smaller players, including partners in crime, supposed victims and a mysterious driver in Mirren’s suburban enclave. Things turn sharply amid the interplay, and there’s plenty of play with knowing, witty banter, as the humor reaches a high point with talk of a “windfall”.

Fun gets whisked away as the twist is more like a chokehold. I’d describe the turn of events as more serious than a heart attack but it’s more severe, not merely serious, than that. Condon tends to take serious matters too wispily. Then, Condon takes those minimized matters and he portrays them much too densely and heavily, whether depicting sex research (Kinsey) or the rise of a girl group (Dreamgirls).

But never more than he does here. This dooms The Good Liar, which, for all the pictures and chatter about book burning, Berlin and Nazis, doesn’t bother with the matter of Jews. So goes The Good Liar in a markedly different direction.

This might’ve made for a successful divergence, but not in a movie that for over an hour teases the audience with banter, winks and lightness, inculcating a false sense of what’s going on. Maybe this is The Good Liar‘s point, that the big lie’s a game movies can play, too, though there’s no fun in being played for a chump especially when it’s delivered with preachy lessons taken from political propaganda.

Good movies about achieving a kind of triumphal liberation through outwitting deception, such as Sleuth, Deathtrap, even lighter fare such as Working Girl, Tootsie and Housesitter, ultimately deal in truth. Not The Good Liar, which piles on excessive points to distort reality.

Is there good in its lie? The Good Liar‘s makers apparently think so. However, a discerning audience will be neither entertained nor deceived.