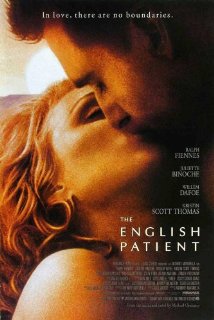 An epic movie about war, The English Patient, based on a novel and adapted for the screen and directed by Anthony Minghella, beautifully sprinkles its themes throughout sprawling north African desert scenes and landscapes, romanticizes religion and delivers an unforgettable elegy about forbidden romantic love.

Oscar’s Best Picture winner for 1996 centers upon an adventurer named Laszlo who poses in some sense as a discoverer (Ralph Fiennes, Schindler’s List). I say this because he never really discovers anything but trouble. But, during the first of three hours, he is the story’s more mysterious presence. The piercing eyes of this gaunt, handsome mapmaker haunt the story within a story and attract the liberated Western woman (Kristin Scott Thomas). Their affair—she is married, he is a loner—dominates the film.

This includes a subplot featuring Juliette Binoche (Chocolat) as a nurse with an affinity for the dying. The English Patient begins with the gentle sounds of windchimes that foreshadow the winds of war and proceeds to alternate between the tales of Ms. Binoche’s Hana losing her values and reclaiming and restoring her life and the torrid, doomed affair between the mapmaker and the fallen woman. Amid pagan nudity, forbidden oils and fruits and readings from the Greek historian Herodotus, the clashing cultures intertwine in sensuality and theme. But, consistent with the film’s subtly Islamic subtext, the female is the temptress to the male; he is bewitched.

Some of the writing, possibly taken from the novel, is exquisite and perfectly portrayed, especially by Kristin Scott Thomas (Salmon Fishing in the Yemen). The best writing serves the story’s unfolding, such as when the nurse Hana explains to her English patient when he chides her for taking in a stranger for provincial reasons: “We’re at war; where you come from becomes important.” The patient, whose face is burned beyond recognition, asks and, then answers: “Why? I hate that idea.”

This is The English Patient‘s leitmotif; the idea that love knows no bounds and the world is whole and accessible to everyone in it. The nurse listens and learns from the wise, burned patient and nourishes the notion, healing herself back to mental health as she tends a garden and wills herself to love again. Nursing oneself is the movie’s best and most successful theme.

But it is secondary to the anti-war theme that love is lost in war. Like the bleak but enticing Pacific World War 2 picture From Here to Eternity, the bleak but enticing European World War 2 picture The English Patient lulls the audience into its passionate affair, reaching its climax in a dance between wife and would-be lover when it is silently, powerfully clear that he wants her, even as her patriotic war hero husband, expertly played by Colin Firth (The King’s Speech), watches the two as they dance.

Then, suddenly, Islamic cries of “Allahu akbar!” erupt in the exotic African sands before an illicit act of homosexuality precedes the fall from grace that hurls the couple toward consummation. This is where The English Patient falters. Ralph Fiennes as the brooding Laszlo is beckoned and beckoning, to be sure, but his character is also (and by his admission) a poor planner; he gets everything wrong, including himself, his love and his life. It is nearly impossible to become invested in his story, especially after he implausibly allows the woman to stay with the endangered party—none of the men object—to be stranded in the desert after the gays being gay cause a disaster. Really, would no one, Moslem or infidel, insist that the woman proceed with the journey? Their being thrown together is contrived.

The cast makes the most of the best lines and wide scope. When a duststorm envelops the camp, turning the desert into quicksand, she asks Laszlo if they’ll survive and he says, “yes, absolutely,” before she pauses to reply, “yes is a comfort,” adding, “absolutely is not.”

This intimacy moves The English Patient toward a dramatic, some might say melodramatic, conclusion, with Fiennes’ Laszlo as a modern nomad tethered only to a woman who spurns him. Here, too, the unnamed religion, Islam, infuses the film’s nobility—few Islamic characters speak; they are decent, silent types that chant, pray and help others—as Laszlo, the man without a country, tells romantic stories of the Fedayeen (which means those who sacrifice themselves). He might as well be talking about himself.

More stories unfold in the meantime, including a story of friendship between a Sikh explosives expert (Naveen Andrews) and a Brit, a Canadian (Willem Dafoe) and a Nazi (Jürgen Prochnow) and between the Sikh and Hana. Each subplot shifts and folds into the next. While scenes are sometimes striking and the point that war raises life and death issues to an extreme comes through, the beauty lies in the subplot and pictures, if not successfully in its bittersweet plea that one should be free to walk on earth without maps. As evocative as it is, The English Patient stumbles in charting that plot point’s course and fails to find its way.