Movie Review: Thank You for Your Service

Writer and director Jason Hall, who wrote Clint Eastwood‘s searing American war drama, American Sniper, debuts his feature directing skills in Universal’s Thank You for Your Service. With commitment to his script, based on the book by David Finkel, Hall largely succeeds. I found myself wanting a wider scope for much of the movie. The intense war veteran drama sub-genre comes from this long, endless, asinine non-war in the Middle East, which Sen. John McCain once let slip might become a hundred-year war. They’re piling up, from Jarhead, Green Zone, Rendition, Stop-Loss and The Lucky Ones, which this picture most closely resembles, to The Hurt Locker, Billy Lynn’s Long Halftime Walk, 13 Hours: The Secret Soldiers of Benghazi and the sterling American Sniper. And the cluster of post-2001 war movies deserve rapt attention from today’s American moviegoer. Most are mediocre to bad. They all merit praise for daring to dramatize what Americans ignore and evade. 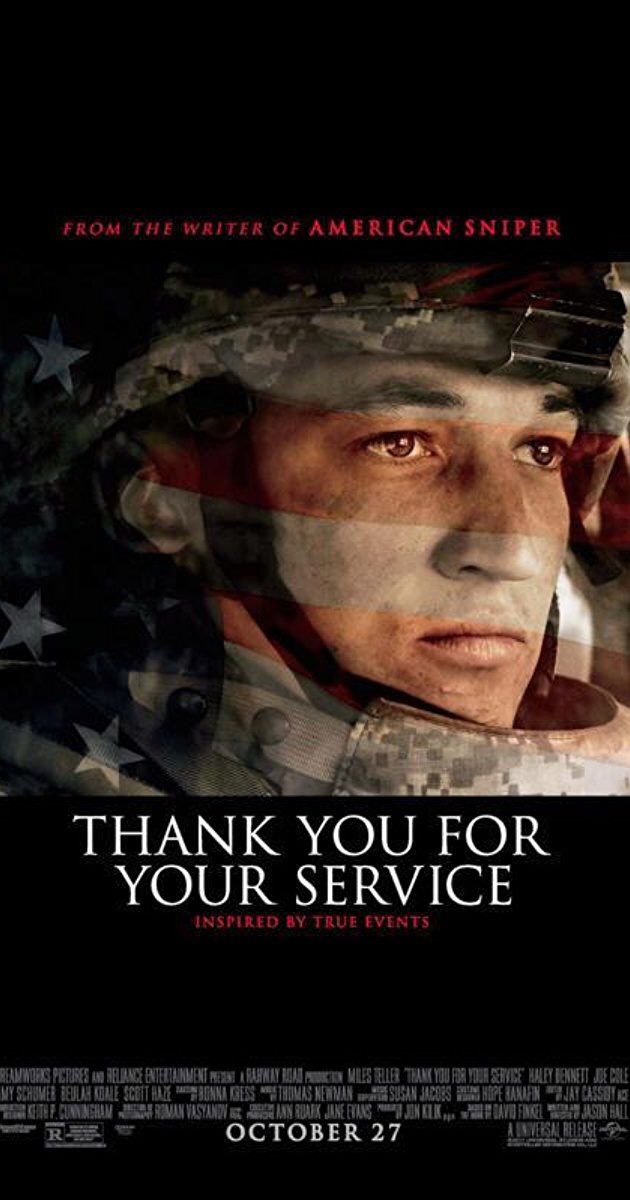 Thank You for Your Service is good, and by good I mean it is moving, sad, horrifying — which every war movie if it is a war movie ought to be — tense, confused and heartbreaking. Thank You for Your Service is also absorbing. You watch the men in agony, you want to know if they make it, you care about the characters, who, incidentally, are based on real American soldiers, a fact the movie thankfully doesn’t inflate and lord over the audience. The title is both biting and unbowed. And that faraway look in the movie poster’s Army sergeant (Miles Teller, Whiplash) is earned.

The vacancy this ‘war on terror’, as George W. Bush described it when he was president after Islamic terrorists attacked America in 2001, marks three war vets’ faces when they at last come home from Iraq. There’s husband, father and explosives expert Sgt. Schumann (Teller, as sharp as ever) and his grunts Solo (Beulah Koale) and Heller (Joe Cole). They jostle, tease and prep for the homefront on the plane and it’s already clear that they’re feeling restless about coming home to Kansas. One returns to a wife who dares him to test her strength. Another wants to father a baby with his missus. Another is engaged and he’s all about that right now.

They attempt to adjust. As they do, the complexity of the task and the complications of what constitutes the military service for which they volunteered become a moving tapestry of what’s now known two decades into this war for nothing in the Arab world (not to mention West Africa). Mental illness, trauma and suicide loom. But the men hold tight to one another. In an emotional bonding scene and set-up for what’s to come, they take a break from re-connecting at a local bar and hop around to a pop tune about love.

It’s one of the best scenes because Hall lets this initially humorous outlet for the men’s anger, pain and physical trauma unwind naturally, melding into a moment in silence with gripping and holding on. This transition is memorable. It could’ve pulled the camera back and gone on.

Thank You for Your Service does go on, with other manifestations of what today’s war veteran faces. Prosthetics, ignorance, trauma. Flashbacks, delusions, more trauma. Waiting for bureaucrats, accounting for the impact, trudging through the lowest moments of more trauma, which means melting down, and this part Thank You for Your Service gets down pat. As Sgt. Schumann’s wife, Haley Bennett is excellent. The whole cast shines, too, with Teller in the lead, Koale as the American Somoan soldier and Kerry Cahill as a dead soldier’s mom standing out.

Hall might have made more or less of certain details, such as the horseshoe in the Humvee or the flag-poled house as a symbol for the happiness pursuit. But he gets the emotional power just right, in scenes with them dancing through the rage, losing power during sex and embracing at a bus stop. Like American Sniper, Thank You for Your Service puts the audience smack into the soldier’s world. There, one sees the value of a fast car, the toxicity of a brainless video game and the importance of owning — and stitching — a dog. War cliches abound, it’s true, and surely someone’s going to find fault in this for that. It comes down to combat, roads not taken and men you may have left behind.

Thank You for Your Service dramatizes with skill and emotional impact the aching loss, void and aim of war in its last two words. It does this about a war which — still, outrageously, after 16 years!!! — is not allowed to be a war in any way that matches this sacred, highest goal. Whatever its flaws, Thank You for Your Service shows the unjust process, from deployment to Veterans Administration (VA) deathtrap, of Americans being soldiers in a deliberately forgotten war. It depicts an ongoing, in-your-face tragedy that’s more important and powerful in this sense than all the artsy films combined. Have a look at what becoming a soldier’s become and think about what it means that they’re coming undone. Everyone should thank Thank You for Your Service.