The eighth Star Wars picture, The Last Jedi, underwhelms. This begins to become apparent with the lackluster three-paragraph opening crawl, a series staple. It thins and flattens out from there, though readers should note that I do not regard any of these films as great motion pictures. 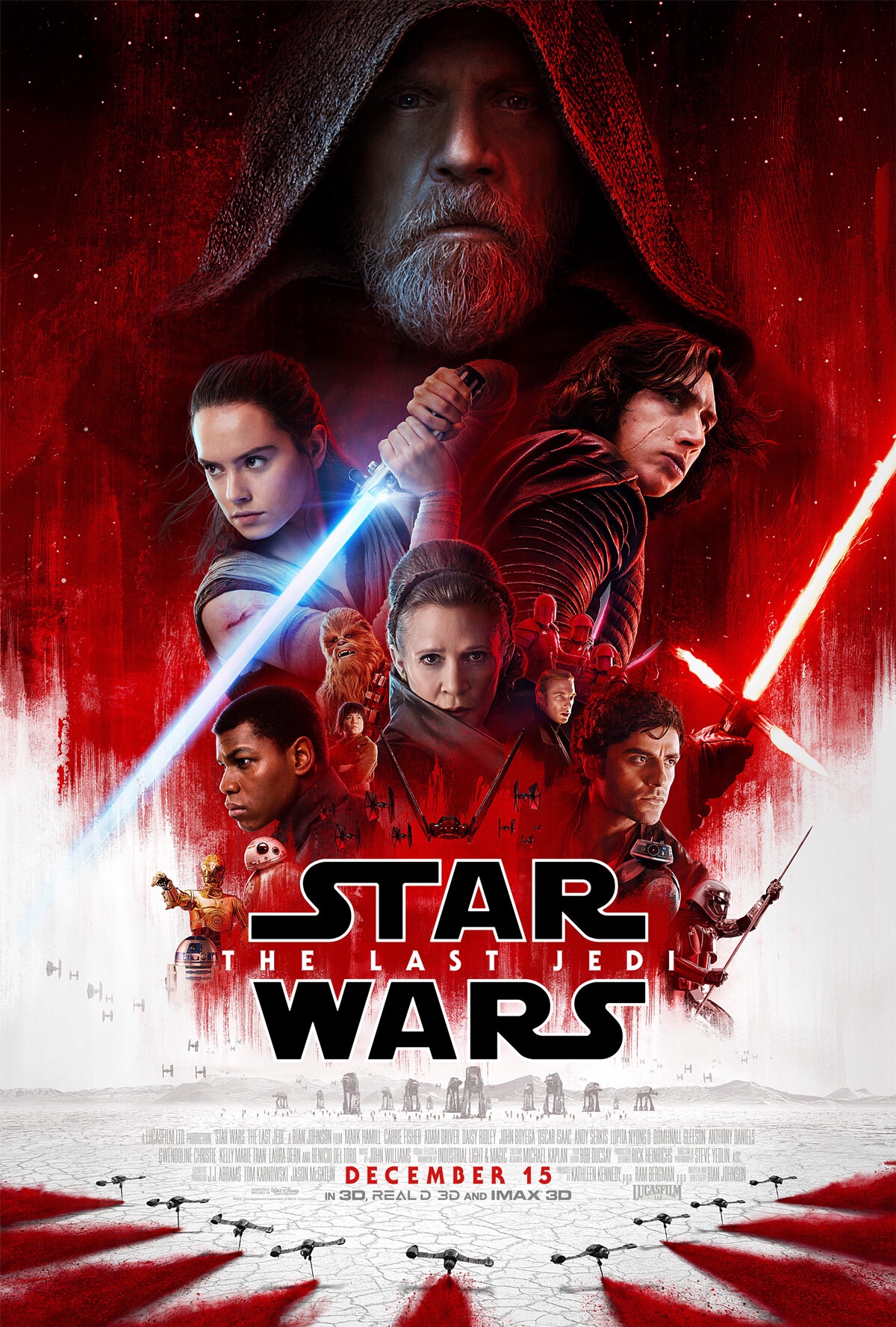 That said, I gave 2015’s entry, The Force Awakens, a positive review (as well as a tepid recommendation of last year’s Star Wars-themed Rogue One). Nearly everything about The Last Jedi is mediocre, formulaic and, frankly, as fresh and exciting as waiting in line at a government checkpoint for permission to travel.

Written and directed by Rian Johnson (Looper), characters return, picking up after the end of The Force Awakens. This means that Han Solo’s son, Ben (Adam Driver), spunky Rey (Daisy Ridley), dastardly Hux (Domnhall Gleeson), plucky Poe (Oscar Isaac), Finn (John Boyega), Luke (Mark Hamill), Leia (the late Carrie Fisher) and the usual creatures and droids are back (with new ones, too). Isaac and Driver fare best this time out.

Most of the cast have cardboard roles with dreadful lines. Luke delivers at least three lines referencing the island where he lives and they all stick out without support or exposition. This is not necessarily Hamill’s fault. But the screenwriting impairs what ought to be his command performance as Luke Skywalker.

Each cast member seems directed to act out each role with sameness, which is not to be confused with consistency. There’s no range here. For example, Rey’s composed and very 21st century in dialogue while gallivanting on Luke’s island one minute, but she’s an emotional New Age wreck the next. Whether Rey’s crying, hugging, holding hands, mind-melding or jabbing with her lightsaber, she’s too on her mark, pat and scripted. In action scenes, for instance, she’s always screaming, moaning and breathing heavily like it’s a command she’s executing rather than an experience she’s having.

It’s not just Rey. Even Oscar Isaac (Ex Machina, Agora), looking thinner and noticeably trying to breathe life into the role, stiffens. Boyega’s Finn fares worst, not merely because the already-underdeveloped character has the least to do that matters to the plot, other than as a prop for a new Asian tomboy character (Kelly Marie Tran). Only Driver owns his role, physically imposing himself extremely well, making sensitively dark, tormented Ben/Kylo Ren the most interesting part of The Last Jedi. The less said about the late Miss Fisher as Leia, the better.

Snappy comebacks are gone. So, largely, is any sense of fun. Even a segment of the picture set in a galactic Monte Carlo-like getaway lacks playfulness and stamina, existing strictly to serve The Last Jedi‘s theme that the “downtrodden” are inherently noble and the upscale are inherently not. It’s as though everything’s deployed to serve a specific plot or marketing function. The stilted quality pervades The Last Jedi. The sameness suctions both its sense of life and nostalgia. What are probably final scenes of iconic characters with other iconic characters amount to lost cinematic opportunities.

Add multiple plot points pushing a kamikaze-sacrifice morality, several scenes which seem to have been storyboarded solely to please PETA, as against adding, alleviating or advancing action and a bombastic score and The Last Jedi underperforms. Potentially interesting scenes, such as a spearfishing moment when two of the good guys appear to prepare for a bite to eat, are cut, lost or mangled. Remember when Yoda trained Luke on Dagobah? Scenes lingered and the extended sequence added depth, danger and mystery to both characters and enhanced The Empire Strikes Back. Here, such bonding moments are pushed away, sacrificed as quickly as characters’ lives. A ghostly space float scene stops all motion and takes the audience out of the movie.

Long and choppy, dragging for stretches without action, Star Wars: The Last Jedi too easily makes the audience want to affirm one character’s declaration that “it’s time for the Jedi to end.” Creator George Lucas has said he made nine stories in his space saga. This laborious eighth is a mediocrity.