The new Star Trek movie, Star Trek Beyond, is fine as light summer entertainment. The series’ leading characters, three white males named Spock, Bones and Kirk, are both true to their original incarnations in the 1966 television drama created by Gene Roddenberry and boldly against Hollywood’s new purge of white males. This is the boldest thing about the new picture, which is written by six different writers, directed by Justin Lin (Annapolis and some Fast & Furious movies) and produced by the man who directed the first film in this batch of movies, the overrated J.J. Abrams, who brought forth the bland 2009 reboot. 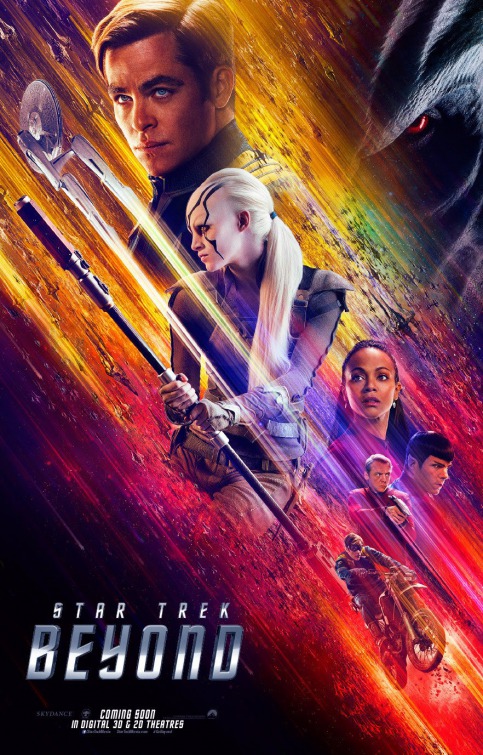 I think this is a better movie than that first installment, which was campy and full of itself. The second movie was a snoozefest, so I didn’t bother to write a review but I remember thinking that Benedict Cumberbatch as the villain was the best thing about it. Here, the production design is marvelous, and it is especially well done in rendering the villain’s (Idris Elba) world, which includes a kind of slave encampment.

But success as fun, lighter summer fare means that the boldness of the whole series is gone. The NBC show, which I found in reruns, was serious and dramatic. Something important, occasionally an ideal, was often at stake. Some were better than others, but subsequent series and movies recycled mostly the multiculturalism, comedy and nostalgia. Now, in 2016, Paramount’s Star Trek Beyond delivers more of the same, though it’s more linear. An outstanding actress is wasted in a cameo role (that’s Shohreh Aghdashloo) and the lines are flat, cringe-inducing or worse while the chemistry among the three leads, which was always a sideline at best to the dramatic arc, is the highlight. A self-reliant new character, Jaylah, is a welcome addition in a decent subplot.

Star Trek Beyond mixes plot fragments involving torture, surveillance and loyalty. Yet there’s nothing bold about how they’re treated. With another all-powerful villain named Krall drawing strength from suffering, the madman bit is getting old, and his contest with Captain Kirk (Chris Pine, Into the Woods) feels tacked on because it is. The basic conflict is underdeveloped.

Plot and action move briskly, however, in three different directions, as the U.S.S. Enterprise and crew spin off into separate orbits as Krall amasses the power to destroy an entire idyllic civilization and threaten the Federation.

So much could have been done with Krall’s inferiority complex leading to a barbaric siege against civilization. But no. Amid breakaways, imprisoned or eviscerated crew and tests of character, loyalty and teamwork, the Federation, utopia and the Enterprise are diminished by the end. The crew are smaller as the franchise ages. No longer the intrepid seekers of knowledge in space, these characters—and I’m sorry to say that the late Anton Yelchin in his final appearance as Chekov deserved a better send-off—convey none of the enthusiasm for enlistment that the original cast did. Zoe Saldana plays Lieutenant Uhura as tougher yet she’s less thoughtful and more stereotypical than was Nichelle Nichols in the role. Familiar characters return. There’s a nod to the late Leonard Nimoy. Sulu (John Cho) is, it turns out, a gay dad which plays neatly if predictably into the plot.

In short, Star Trek Beyond is mildly enjoyable at the expense of deeper engagement. Like its muted lighting, which looks the same in every atmosphere, Star Trek‘s whole universe feels artificial. The series, in playing to today’s demand for momentary thrills, jabs and jokes, is selling out its core value premise: excitement about discovering, exploring and mastering the unknown with a united band of enterprising men and women. A movie based on Gene Roddenberry’s Star Trek vision should be bold. This one is not.