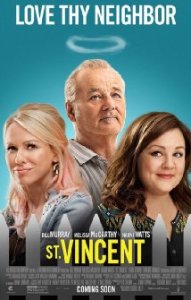 Comedians Bill Murray and Melissa McCarthy shine in writer and director Theodore Melfi’s sentimental Catholic character drama, St. Vincent, which touts itself as an ode to sainthood but redefines what it means.

Everyone’s broke in this contrived, enjoyable movie, from Murray’s alcoholic to McCarthy’s divorced mom. Her kid, named Oliver and well played by Jaeden Lieberher, puts up with his hospital worker mother’s deficiencies, which include hiring Murray’s drunken war veteran Vincent to babysit. Vincent takes Oliver into the seedy world he’s inhabited since his life went bad, which, judging by the entrenched habits, was long ago. That he also teaches the kid is the movie’s hook and it’s obvious, pat and abbreviated but it plays into a sweeping scene that cashes in humor and pathos like Little Miss Sunshine meets Mr. Holland’s Opus.

St. Vincent, finding the good in a hard-knock life and the virtuous in man, is powered by charming performances based on solid characterizations and a script that seeks to deliver us from cynicism. With nerdy, intelligent Oliver enrolled in one of those city Catholic schools where kids are sent in lieu of reformatory school, and with the adults in his life falling apart around him, the stage is set for a confluence of redemption and contrition within a distinctly Catholic context. This allows for lots of liberties taken with icons, rituals and religious myths. A pregnant Russian prostitute (Naomi Watts, overdoing it a tad), a loan shark (Terrence Howard) and a vacant patient in a nursing home enhance what adds up to an almost palliative effect.

Bill Murray’s drunk keeps the action alive and moving, through a good script and heartfelt performance in a characterization that measures the value of a single life. He keeps telling everyone who wants something from him that they do not know him, not really, which is the cynic’s cry for help to heard, seen, known and loved. A scene in which he dances to a tune by Jefferson Airplane illustrates the concealment, unmasked only when he’s intoxicated. The mutual interest money exchanged between McCarthy’s angry, wronged woman and Murray’s embittered, old man climaxes in a conflict that tests everyone’s character to the max.

The film’s theme that life is like a maze and one’s purpose is to pursue one’s values with kindness, not contempt, in the navigational choices largely works well. This is due to Catholic school-educated Bill Murray’s strengths in playing himself, again, as he’s done since the beginning of his career. His Vincent is as goofy and crude as his characters in Meatballs, Stripes and Ghostbusters and not better or worse, so don’t look for profound lessons beyond what’s here.

What’s here is good and decent and exceedingly well done, with warm and rewarding scenes and touches. Oliver grows and learns from the bitter old drunkard to “speak up and be bold!” So does everyone else, though not beyond their capacity to change. The humor is seeded in the conflict and irony of trying to invoke, instill and inspire the good, and St. Vincent is often funny in service of being human. That the better type of man—a saint by this movie’s terminology—strives to be a trader is not lost on the way. The most rewarding, and also most moving, part of the picture is when life’s mess is sorted, cleaned, detoxified and put in perspective, accentuating the positive, as happens sometimes in real life. Melfi figured out how to put Murray’s depressed, grumpy clown act in a story that dramatizes discovering the good in somebody that seems too damaged to love.