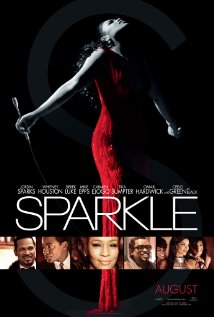 Set in the 1960s, Sparkle (a remake of the 1976 version of the same name) tells the tale of three sisters who strive to become recording artists in the Motown era and struggle to remain a family amid the toxic magnification of fame. It is Whitney Houston‘s final film.

Don’t see it just for that reason, though she shows one last glimpse of her larger than life talent in an oversimplified secondary role as the girls’ strict, religious mother. In fact, Whitney, who is credited as an executive producer and reportedly fought to get this movie made, portrays a character very similar to her own mother, Cissy Houston, a former backup singer for Elvis (another luminous star who died tragically – in his case 35 years ago today) who became a Bible-thumping Christian. One can almost feel Whitney putting her own spin on this role, updating, improving, pulling it back and calibrating her performance. She transforms a two-dimensional Bible mother into someone who’s probably better than I imagine her own mother to be. That counts for something.

Unfortunately, Whitney and everybody else doesn’t get much to work with in obvious characterizations and meandering plotlines. See Sparkle (and only if you want to) for the music, the showmanship and the soap opera, but know going in that it’s more soap than opera. Sparkle is not, however, a vehicle for any star, Whitney or anyone else. As the title character (Sparkle’s her name), TV talent show alumni Jordin Sparks is sufficiently fresh-faced (my filmmaker guest liked her more than I did), playing the ingenue who becomes a mature woman amid the wrenching female family saga that encompasses race, sex, drugs, money and religion. Sparkle learns to put some sizzle into God’s gospel and that’s what the story amounts to, which turns out to be anti-climactic and that’s not because I’m not religious. Her big solo number is a repetitious bust, to be frank, but the end credits song is better. It should have been in the movie.

So much should have been in (and left out of) this movie. Mother and children live what looks like an easily upper middle class existence but everyone talks as if they’re struggling in the middle class. Mother has a dress shop – she apparently built her business herself (insert Barack “you didn’t build that” Obama joke here) – yet we do not see enough of what makes Mama make money and pay for her daughters’ pricey bedroom interiors. Nor do we see enough of how middle child Sister (red hot Carmen Ejogo) goes from mother love-deprived sex kitten to drug addict and battered woman or why Sparkle’s boyfriend Stix (Derek Luke) puts business above his honey or why he switches back or why Dolores (known as just “D” and you’ll see why and played by Tika Sumpter), my favorite character, wants to become a doctor when not many black women from Detroit, where Sparkle takes place, sought admission to medical schools. Too much story and not enough cutting and editing, leaving gaps where there should be transitions, is a problem. One gap is an interesting character named Levi (Omari Hardwick), who gets jettisoned from the story and then reappears in an out-of-character way.

Yet it’s not a bad movie and Sparkle has a shine. Burrowed between cuts and fragmentary scenes is a strong thread – stronger in certain ways than in the original and certainly better than was executed in Dreamgirls – about siblings and what it means to be a sister. Sparkle, the spirited songwriter, is the young pup in love. D is the protective, responsible older sibling who has no time for anything but her goals. Sister is the troubled sparrow, who mistakes her virtue for a ticket to ride, and when she gets derailed she recognizes her own limits and pays her sisters back. It all could have been quite moving, really, and at times it comes close or evokes an emotion, but cardboard characterizations such as the heavy Satin (Mike Epps), dim the lights and trivialize real issues such as race-based self-hate, toxic infatuation which is not love, physical abuse and, in what should have been the most compelling part of the story, self-centered opportunism, which many mistake for 100 percent perfectly selfish ambition. All this rests on the musical performances of the early 60s’ girl group, which are nearly worth the price of admission. The first few numbers are excellent, impeccably costumed by Ruth Carter, staged and filmed and with audience reaction shots so that you remember that it’s a story, not a music video. The tunes and numbers are often elegant, sultry and wonderfully accessible. If you love the Motown pop sound, you’ll love the musical scenes.

Religion is played as the cultural black church version – a more positive, jubilant and less fundamentalist interpretation of the Bible in which God rejoices in seeing “happy, good-looking black folks” in his house – and when the girls are boppin’ in their babydoll dresses to pave the way for their future, their success is celebrated, not denigrated. Director Salim Akil (TV’s The Game) teases us with thought-provoking lines about never being sorry for telling the truth and about people who ought to be helping themselves being too busy prayin’ with preachers who are awfully quick to take the money in the basket. But the topically relevant director falls back on odd shots that sugarcoat men hitting women and he doesn’t develop the plot to match the tunes. Along the way, we lose track of what begins with an excellent sense of time and place, complete with civil rights clips, and end up with a production number that feels like 1995. But Whitney Houston makes an impression in a movie, from The Bodyguard to The Preacher’s Wife, and Sparkle shows us a peek at what might have been part of a redemptive comeback wrapped in a cautionary tale about discovering why what’s held sacred is what shines the brightest.