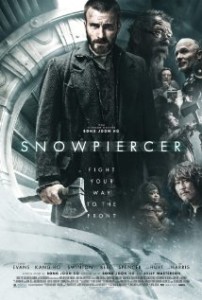 A small foreign film about an onboard rebellion against an eco-Stalinist dictatorship, Snowpiercer, marks the English-language debut of South Korean writer and director Bong Joon-ho.

If this sounds strange, it’s because this dystopian movie takes place on a perpetual motion locomotive. Snowpiercer concerns the aftermath of a failed experiment to stop global warming that instead causes an ice age and nearly destroys human life on earth. But don’t take that too seriously. Amid the layering of multiple political themes, there’s also a hodgepodge of Nietzsche’s ideas, anti-industrialism and warnings against deification of the dictator and treating technology and ecology as a religion. Add a severe matriarchy, with Tilda Swinton as a toothy fascist in charge of keeping people down on the train, and a visual style of German expressionism and you’ll start to get the picture, which is distinctly anti-environmentalist (the dictatorship obsesses about “sustainability” and population control, key tenets of the eco-faith). But know that Snowpiercer is purposefully vague in order to garnish its stylized filth, rot and graphic violence (I take it as a dramatization of rationalism).

“We control the engine, we control the world,” goes the line from dictatorship to the poor, weak, oppressed dictated, led by Chris Evans (Captain America) as Curtis, who is mentored by John Hurt (V for Vendetta) and accompanied by Jamie Bell (Billy Elliot). The cast, which includes Octavia Spencer (The Help) as a mother, is good, though it’s hard to stand out in the grime as they revolt against government rationing and brutal kidnappings of lower class children. As the rebels make their way through the train, rocking as various external forces affect the ride, thinning the herd and learning more about the nature of what lies ahead, the action fires up again and again. Blood spurts, often in slow motion.

Evans is excellent as always. Bell is also especially focused in his performance. Spencer makes an impression, too – so do Song Kang-ho and Go Ah-sung as a father-daughter pair of drug addicts – and Allison Pill as a teacher is effective in depicting a character that recalls today’s public, which is to say government-controlled, schools and she does so to the extreme. Swinton overacts as only she can, evoking her evil eat-little-children-as-a-snack glee in the Narnia movies.

The plot climaxes in a steam room, followed by a scene out of a West Hollywood street party. Only, wait, there’s more. Too much more and the film drags on too long as the audience waits for the reveal of what powers the train’s heavily and unquestioningly worshipped engine. All comes together in a logical if depleted way. Countermarketed against Transformers 4, with an ironic twist on MSNBC’s or Barack Obama’s theme (“we move forward”), Snowpiercer (based on a French graphic novel) rips, blasts, chops and even cajoles. It ends up as an interesting, if cold, bleak and fetishized, story about stopping the motor of what moves us backward.