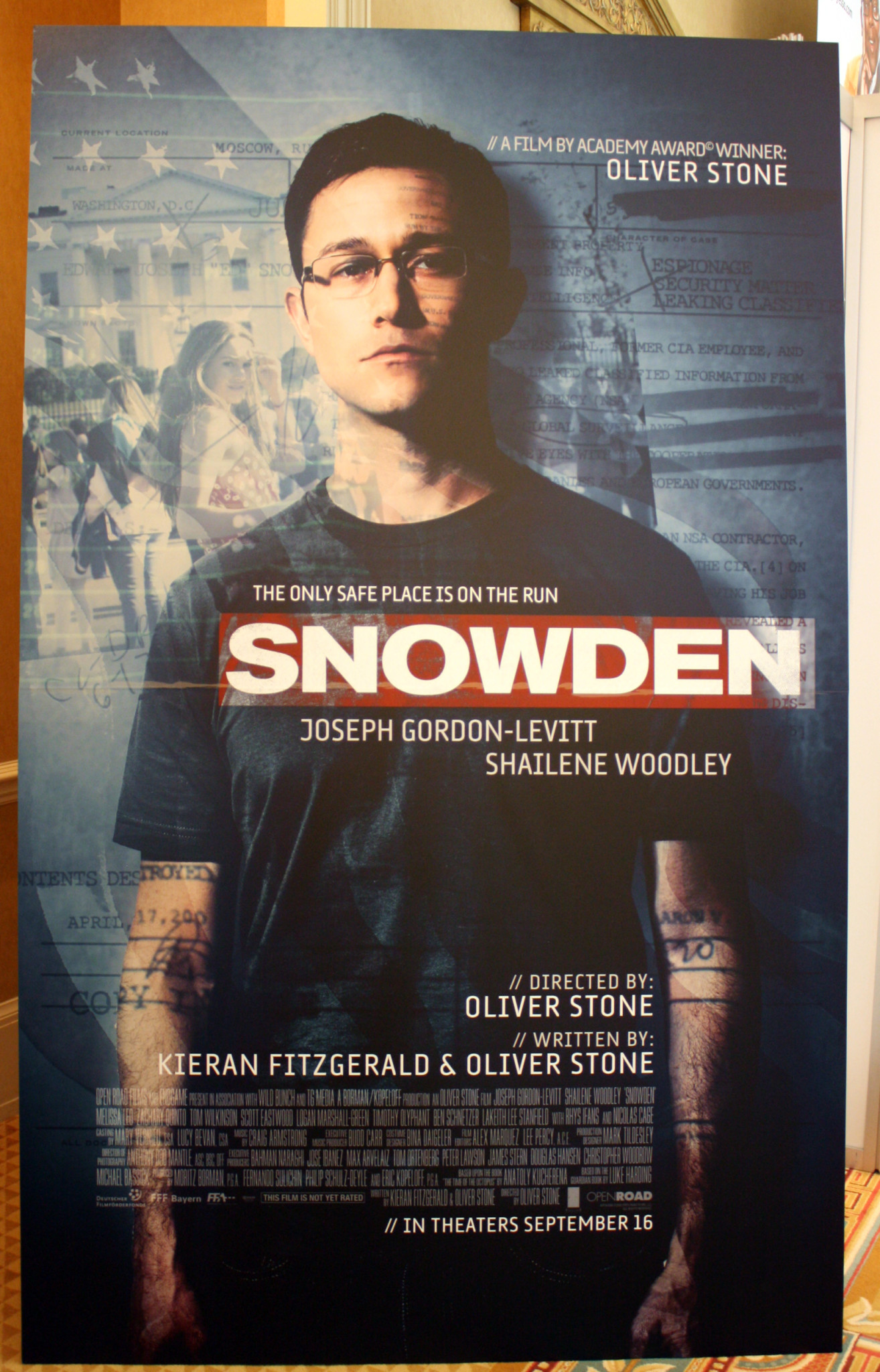 Hero worshippers should be predisposed to Oliver Stone’s Snowden, opening this Friday, September 16, 2016.

They will not be disappointed.

I’m not a fan of the controversial filmmaker’s, though his pictures, such as Alexander and JFK, have merit. Like his right-wing counterpart, director Clint Eastwood—whose September movie Sully also laments and examines the fall of the hero who is a much-maligned white male—leftist Oliver Stone makes character studies. Stone’s movies, like Eastwood’s, are naturalistic. They are not romanticized.

Snowden may be Stone’s best picture. Though flawed, slow and uneven in stretches, the cinematic adaptation of two books about the young American for whom it is titled is surprisingly even-handed, moving and potent. Stone is merciless in assailing the Obama administration’s dishonesty, portraying the fundamental betrayal of essential American principles, and decent people such as Edward Snowden, with sharp lines, video clips and cuts.

Snowden, like Sully, starts with the sound of voices. They talk on the telephone. Audio gives way to video and social media until, slowly, insidiously, it dawns on the audience what mass, indiscriminate metadata collection by the state means in everyday practice—how it violates your privacy and your rights, how by implication surveillance statism does nothing to defend your rights, your money or your life. Stone employs this shadowy, paranoid sensibility throughout the film. It is one of his trademarks.

He also deviates from his hyper-masculinity with a depiction of an intelligent and sensitive man at the beginning, as against the end as in Sully, of an exceptional career. Ed Snowden (Joseph Gordon-Levitt, The Walk), as he’s sometimes known here, enlists in the U.S. Army Special Forces after the Islamic terrorist attack on September 11, 2001. The small, slender, vision-impaired epileptic computer geek lacks the physicality to make it through basic training.

But Snowden possesses the desire, dedication and patriotism. The Army stint, shown as in Sully through scattered flashbacks, marks a turning point in his philosophical growth. This progression is captured in one crucial scene in which Edward Snowden reveals to an interviewer key influences, such as Henry David Thoreau, Joseph Campbell and Ayn Rand.

“Ah, Atlas Shrugged,” the interviewer says in recognition of Rand’s masterpiece, referring to one man who stopped the motor of the world. So goes Snowden‘s theme that the idealist moves the world, in Snowden’s case at the price of his own mobility and autonomy. This is how Stone, with screenwriter Kieran Fitzgerald, casts the tale’s individualist—with Edward Snowden as a real-life John Galt.

At least Stone, an anti-war conspiracy theorist who once sought to remake The Fountainhead, grasps that “going Galt” means blending in to change the world. This is exactly what self-taught Snowden does as he gains security clearance and stature to earn trust and authority, including from Nicolas Cage’s mentor (who’s like Henry Cameron in The Fountainhead), setting terms and hacking systems at the state’s various spy and surveillance apparatuses including the CIA and NSA at posts in Europe, Asia and the Eastern and Western United States.

The freethinking high school dropout is paired with a free-spirited sensualist (Shailene Woodley of the Divergent films) to accentuate the mind-body meld to come. Their romance heightens tension. Woodley, who apparently sought the role on principle, adds poignancy. Both characters rise above surveillance state whispers smearing them as misfits. Ed and Lindsay (like Sully and his wife Lorraine in the other movie) are productive equals in partnership trying to live and enjoy life on their own terms.

Snowden is inscrutable and remote. His girlfriend is expressive and right there in the moment. Like many of today’s hobbled youths, they seek to find balance in a confusing world. Whether they succeed is entirely unknown, and necessarily so, as this movie must remain elusive to protect the innocent (and, in real life, Edward Snowden met with Stone and Fitzgerald in Moscow and cooperated with the movie, making it more pro-American, according to Stone.) Stay seated for the end credits for a clue. Woodley’s Lindsay really puts Snowden’s actions in perspective of the pursuit of happiness. If a fraction of this story is true, it’s an alarming, powerful and chilling account of the nation’s descent into dictatorship.

As Snowden remains straight, sincere and principled in his patriotism, trying to decode the security versus liberty false dichotomy for himself, with Woodley regarding questioning government as the principle upon which America was founded, Snowden filters references to FISA courts, the Iraq war, encryption, the military-industrial complex, PRISM and Xkeyscore into its paranoid mix of Cold War and post-9/11 government types controlling the country with fear but neither clarity in communication nor victory in war.

This makes Snowden‘s basic flaw—a refusal to depict a single Islamic terrorist act—more glaring. Dramatizing Snowden’s traitorous or heroic act in 2013 (which I first wrote about here and praised in earnest here) requires a plausible argument against surveillance statism, which means accounting for its results, which necessitates showing acts of war by jihadists.

None are evident in Stone’s Snowden.

The absence of jihadists robs the movie of a crucial part of what must have been readily evident to Snowden, whose life starts to resemble Jason Bourne’s; that none of this incessant “security theater” (i.e., TSA) stops Islamic terrorist attacks. Despite this omission of relevant facts, Snowden is not mere propaganda (like Spike Lee’s interesting Malcolm X) and, while it moves glacially in spots through the programmer’s methodical approach to understanding his government, his girlfriend and how his work might harm the innocent, he fully earns his conclusion that “the only thing we’re protecting is the supremacy of [the] government.”

In fact, Snowden downplays the fundamental threat and danger to man’s rights by grounding the tale in the tension-packed days when he met with filmmaker Laura Poitras (Melissa Leo), left-wing activist and journalist Glenn Greenwald (Zachary Quinto) and Ewen MacAskill (Tom Wilkinson) and assumes a broad context of knowledge about the ramifications of mass, unchecked statism. After Snowden quit the CIA on principle, he “thought things were going to get better under [Barack] Obama”, like many Americans did in 2008, which is why the movie’s second half, as he moves with Lindsay to Oahu to work in an underground spy facility, generates suspense and heaviness.

His historic act of defiance snowballs into a nerve-wracking climax that taps today’s mass anxiety.

“I was wrong,” Snowden says about his trust and optimism for President Obama, whose lies consume the story and threaten everything Edward Snowden—who by now has gone from being a pale code-puncher to a man with priorities, commitment and the blush of color—values, treasures and loves. “Yes We Can” becomes the motto affirming Big Brother’s rising power to watch and control your life, with Gordon-Levitt nailing Snowden’s measured, composed analysis, referencing the Nuremberg trials to his complacent, compliant boss (Scott Eastwood) and judging for himself what constitutes proper transparency and disclosure.

In the end, with a Hong Kong hotel’s Do Not Disturb sign serving as the euphemism for the great American proclamation “Don’t Tread On Me”, Snowden pulls off what is at once sharp, powerful and painful to watch: a penetrating portrait of a damaged, fragile youth of ability and promise—representing America’s future—driven to surrender his freedom and flee to faraway lands by military-industrial statism, i.e., fascism, in order to protect his life, rights, woman and Constitutional republic. Snowden in its paranoia and grating, glacial imperfection, delivers a pale-faced superhero who is human, frail and vital—not hollow, weak and blank.

For this reason, Snowden is excruciatingly emotional if you know in advance what his being jettisoned from the nation he fought to serve objectively means and it’s likely to be inexplicably agonizing and anxiety-inducing if you don’t. In either case, you will probably want to exercise free choice over controlling your private property and keep covering your computer’s camera. Whatever you think of Edward Snowden and Oliver Stone’s Snowden, you have only Ed Snowden to thank for that.