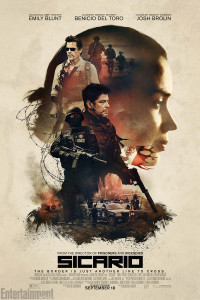 Despair is the main theme of Sicario, the new movie by director Denis Villenueve. This one, like his previous picture, Prisoners, is stylized and well made. It proceeds as though it’s got something crucial to convey, with compelling characters, twists, scenes, transitions, music and photography. Everything is designed to build tension toward action and denouement.

That the foundational part is problematic does not make this picture about police, drugs and gangs and the two countries that feed off the buying and selling of drugs, the U.S. and Mexico, less enthralling. Sicario, starring Josh Brolin (True Grit, No Country for Old Men, Men in Black 3) and Benicio Del Toro (Traffic) and Emily Blunt (Salmon Fishing in the Yemen, Into the Woods), reunited after 2010’s underrated The Wolfman, stretches situational types—the cop as family man, the woman in a male-dominated profession, the jaded professional with a heart of gold—into a tight plot.

Villenueve keeps the audience both at bay and on edge, shrouding a Mexican drug cartel operation in mystery and blood. Hardness sets in from the start, with a federal drug bust in Arizona, and each character, from Brolin’s wise-cracking fed to Victor Garber’s polished professional, plays to Sicario‘s theme that practically no one can escape some form of a drug-induced death in the desert. If Prisoners enraptured with its theme that we are all just prisoners here, as the Eagles’ Don Henley sings, Sicario, which means hitman in Spanish, pushes the notion that everyone is guilty of doing some type of hit.

Blunt’s character bucks the trend, taking out drug gangsters but feeling it afterwards. She’s driven to exact justice with her partner (Daniel Kaluuya) and question the authority of those to whom she volunteers to report for a mysteriously dangerous mission into the center of the drug cartel. Collaborating with a seriously damaged Del Toro and swaggering Brolin and their motley, manly crew of various paramilitary types, Blunt’s earnest agent gives the murky field operation an air of credibility. But why this wild bunch needs her remains a mystery. With slow-moving overhead shots, a Twister-type droning score with pulsating beat before every action sequence, Villenueve makes the players matter one by one and without the camp and cartoonishness of Scarface or No Country for Old Men. There’s real craftsmanship in Sicario‘s filmmaking, alternating fast and slow action scenes, such as bang-bang gunplay peppered with step-by-step journeys into long passageways, signs and cityscapes signalling the bigger pictures and, in particular, one silhouetted transition from a public to private interior.

Sicario has nearly everything a drug gangster movie should include: jaded agents, shifting allegiance, double cross, guns, caravans, border crossings, Texans, Arizona and a honky tonk, too. It has a good script by Taylor Sheridan and good performances by Brolin, Blunt and especially Del Toro, a fine actor who deserves a role outside of drug culture. As good as Blunt is in the role of a policewoman on the verge of becoming a whistleblower as all the planning, raiding and shooting gets more convoluted, I didn’t totally buy her character. Many in today’s audiences probably will. She’s sufficiently blank and tough in the cop role, with a flat American accent that reminded me of Jane Leeves as Brit Daphne Moon doing a deep, flat American accent on Frasier. I like Blunt as an actress because she can play a wide variety of roles with conviction. She does that here, too.

But either the part’s underdeveloped or today’s female supercop is so deeply ingrained through countless movies and TV police procedural programs that you might not notice the character’s several mistakes. She errs in judgment time and again, from losing a weapon and lagging behind to other questionable decisions, including saying the movie’s worst lines. Her character’s stumbles blend into the hyper-tense action, so it’s less noticeable, but each of her out of place objections, mistakes and reckless actions diminish the character’s plausibility. This may be part of bleak Sicario‘s point about the character’s arc, for all I know. It is certainly part of its theme that despair from fighting a war on the drug cartel is human.

“We must be engaged to engage,” someone warns before one of the movie’s most exciting scenes. The ever-looping cycle of engagement, whatever else Sicario lacks, including an examination of what drives engagement of buying, selling and outlawing drugs, is a targeted, terrifying depiction.