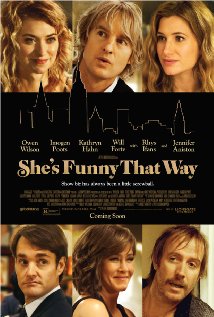 See Lionsgate’s new comedy for what it is not, knowing in advance that it’s too aware of what it is. Peter Bogdanovich’s return to cinema, She’s Funny That Way, is a diversionary pleasure. It is flawed and light, smart and snappy. But it helps to know that it is embedded with so much more.

As a movie in the genre of what writer and director Bogdanovich (What’s Up, Doc?, The Last Picture Show, Mask) calls screwball comedy, it’s a daring choice for a comeback film. Master filmmaker Bogdanovich, a writer and film journalist who became a top, moneymaking director in the 1970s and is known for seminal pictures such as Paper Moon (1973), is discriminating. He’s outspoken as an artist who rejects today’s cultural vulgarity. That his personal life has at times become as larger than life as some of his movies—his Playboy centerfold model girlfriend was murdered in a plot depicted in Star 80—powers his unique perspective.

She’s Funny That Way focuses one’s attention, in a universal sense, on what matters: the truth about what’s funny.

Framed by two female characters in an interview exchange, the story mixes prostitution and show business. So, it’s easy to see the potential for humor, lines with jokes and sight gags. She’s Funny That Way, centering on one New York City actress (Imogen Poots, A Long Way Down), grounds the humor in the good. As the Poots character spins her bawdy tale of getting a part in a play to a skeptical journalist (Illeana Douglas), she begins with gratitude and she means it. True to shifting, ensemble comedy, whether the intended recipient of her gratitude deserves it may not be obvious—neither is it obvious who the intended may be—but describing the plot as the tale of a call girl who gets a callback isn’t quite right.

Of course, this is what makes the madcap affair a bit too contrived and self-conscious, which undercuts the laughter. What Mr. Bogdanovich attempts is an integration of Ernst Lubitsch’s 1940s’ lightness (complete with a Lubitsch movie line capping its theme) in a present-day setting. With Owen Wilson (How Do You Know, Little Fockers, Midnight in Paris) as the play’s director, Rhys Ifans (The Amazing Spider-Man) as an unlikely playboy, Jennifer Aniston (Love Happens) as an angry female psychiatrist, Will Forte (Saturday Night Live) as the playwright, and Kathryn Hahn (Tomorrowland) as the director’s wife and actress, multiple characters interact, intervene and collide. It’s a comedy—with an outstanding cast led by Poots’ heartfelt performance—of errors, omissions and facades.

There’s humor in the unmasking. As subplots converge with exaggerated exactness and the fur flies in theater, restaurant and hotel scenes, She’s Funny That Way plays out its theme that aligning one’s sexuality with one’s self-interest is sure to make one a little mad these days. For all the classic Hollywood references, which are a treat unto themselves, She’s Funny That Way is refreshingly modern in the best sense. Peter Bogdanovich has made a sober, realistic movie about becoming self-made with a rare lightness that’s sorely missing from most comedies. It’s not entirely successful, so don’t expect nonstop laughing out loud but there is nothing tainted or jaded here.

Today, this is an incredible achievement, especially if you’re Peter Bogdanovich, who ought to keep making movies. She’s Funny That Way, which reunites the director with his Last Picture Show star Cybill Shepherd and is co-written by his ex-wife, Louise Stratten, and co-produced by his daughter Antonia, gives sleeping one’s way to the top and making the most of the madcap, a fresh, benevolent twist.