Civil war provides the context for Universal’s Shanghai Express (1932), Josef von Sternberg’s pre-Code star vehicle for his wife, actress Marlene Dietrich, which screened last week at the Chinese Theaters at TCM’s 2016 Classic Film Festival (read more on the festival here and scroll down for a note on the program). This Depression-era box office hit offers 82 minutes of strange, lavish costumes and pictures and sinister acts based upon a 1923 event on the Peking-Shanghai railroad line.

The fourth of six movies teaming Dietrich with Von Sternberg features better style than substance, though Shanghai Express, centrally the story of a fallen woman (Dietrich, of course) redeeming herself for the man she loves, broadly stands for romanticism against cynicism in the wartime Orient. Moviegoers may recognize Warner Oland, the Swedish actor who played the title character in 16 Charlie Chan movies, as one of the passengers. 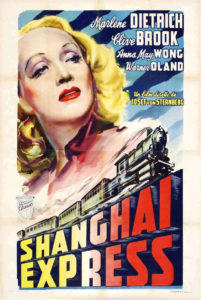 “It took more than one man to change my name to Shanghai Lily,” Dietrich’s slick, mysteriously overdressed passenger tells her ex-lover, played by Clive Brook, in one of the crackling lines by screenwriter Jules Furthman (based on a story by Harry Hervey) before returning to her compartment with an equally mysterious companion played by Anna May Wong. German expressionist Josef von Sternberg tracks the entire picture to Dietrich’s relationship with Brook’s British military surgeon, who’s taking the train to perform brain surgery on a high-ranking Chinese government official.

After government officials seize a top rebel agent on the express, anti-government bandits halt the train, which is then commandeered by a warlord who kidnaps the surgeon for a prisoner exchange with the Chinese. None of this is especially clear in Shanghai Express, which includes among its passengers an opium dealer, an old hag with a boarding house and a smuggled little dog, a Christian missionary, a gambler, a French major and a mysterious Eurasian named Henry Chang. None of them warm to the two painted ladies down the hall and each has his own motives.

But from the moment the old woman smuggles the dog onto the express in “Peiping” (the Chinese city now known as Beijing has had several English language incarnations) and Marlene Dietrich’s seductive, androgynous traveler slowly draws the shades of her dark, shared compartment, the sexual Shanghai Express is about her, her gal and her ex-lover and what her Shanghai Lily might be willing to do for love.

The train clicks, rolls and steams, as passengers size one another up and down, with satire of British imperialist culture and not before the plot turns with rape, murder and a thematic device tipping that war robs lovers of precious seconds. As one character warns in the highly and memorably stylized Shanghai Express: “Time and life have no value in [wartime] China.”

Director Josef von Sternberg’s son, Nicholas von Sternberg, graciously talked about his father and stepmother, Marlene Dietrich, with Turner Classic Movies writer Jeremy Arnold (author of TCM’s The Essentials: 52 Must-See Movies and Why They Matter) during the pre-world premiere restoration interview at TCM’s 2016 Classic Film Festival. He confirmed that Von Sternberg added the “von” in 1921 and explained that Shanghai Express was the couple’s most commercially successful motion picture. But Nicholas von Sternberg, who also had kind words for Marlene Dietrich, pointed out that his father’s exhaustive effort—his application of techniques using different planes of focus on the foreground, the middleground and the background, for instance—earned Josef von Sternberg the nickname “Midnight Joe” for long nighttime hours of filming. The director’s son said that one shot in Shanghai Express which was filmed in Morocco took 90 takes.